25 Bible Verses about Revelation Through Prophets 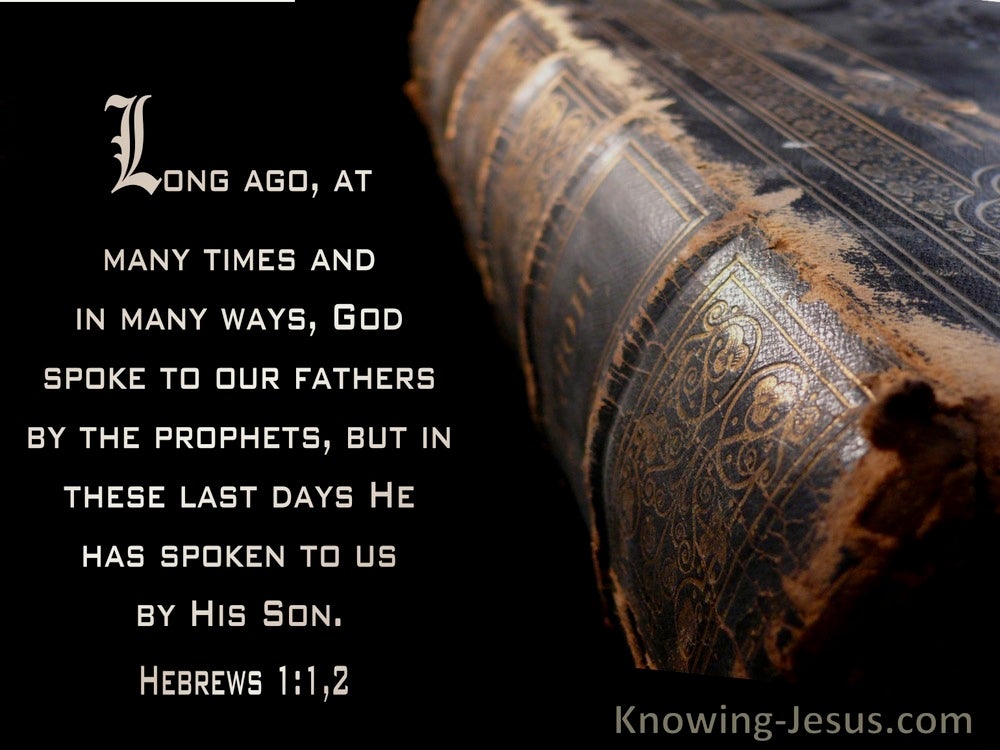 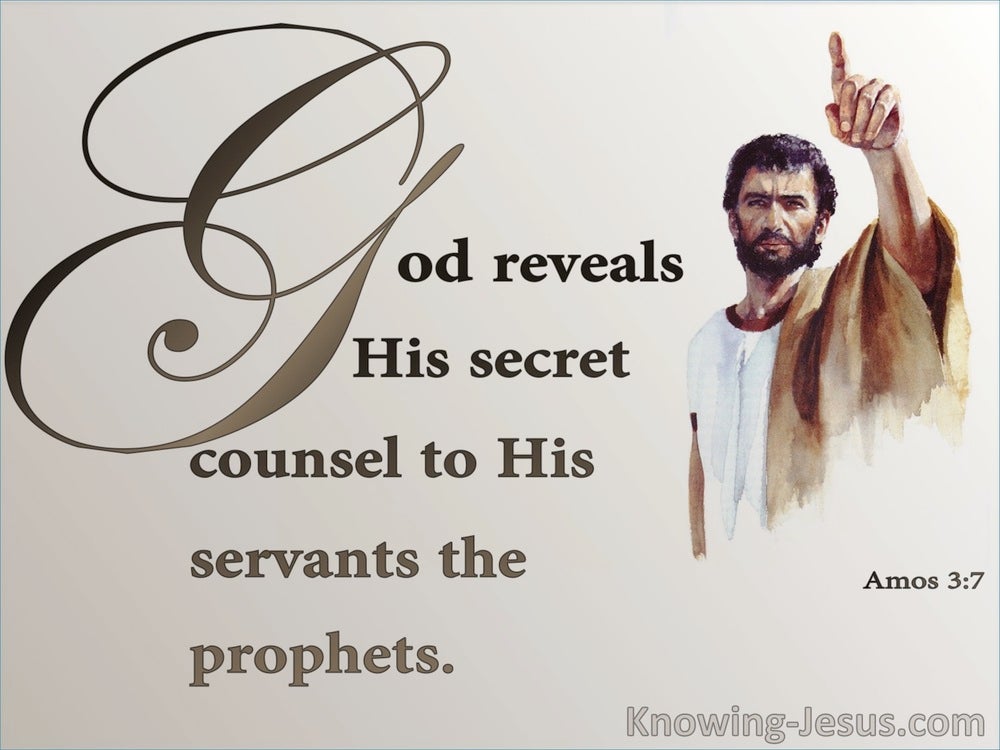 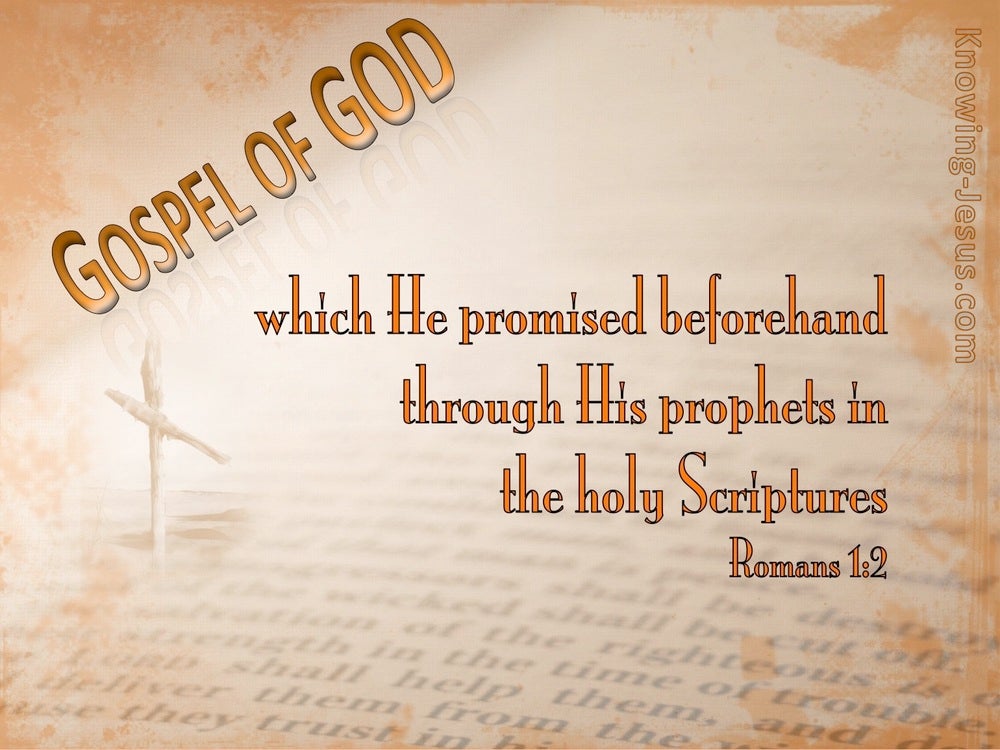 Hebrews 1:1
Verse Concepts
ProphecyAccess to GodGod Spoke By The Prophetspast
Inspiration Of The Holy Spirit, Means OfGod Speaking Of OldProphecy, Inspiration Of OtProphecy, Methods Of Ot

God, after He spoke long ago to the fathers in the prophets in many portions and in many ways,

The Lord said to him, “Who has made man’s mouth? Or who makes him mute or deaf, or seeing or blind? Is it not I, the Lord? Now then go, and I, even I, will be with your mouth, and teach you what you are to say.”

“The Lord your God will raise up for you a prophet like me from among you, from your countrymen, you shall listen to him. This is according to all that you asked of the Lord your God in Horeb on the day of the assembly, saying, ‘Let me not hear again the voice of the Lord my God, let me not see this great fire anymore, or I will die.’ The Lord said to me, ‘They have spoken well.read more.
I will raise up a prophet from among their countrymen like you, and I will put My words in his mouth, and he shall speak to them all that I command him. It shall come about that whoever will not listen to My words which he shall speak in My name, I Myself will require it of him. But the prophet who speaks a word presumptuously in My name which I have not commanded him to speak, or which he speaks in the name of other gods, that prophet shall die.’ You may say in your heart, ‘How will we know the word which the Lord has not spoken?’ When a prophet speaks in the name of the Lord, if the thing does not come about or come true, that is the thing which the Lord has not spoken. The prophet has spoken it presumptuously; you shall not be afraid of him.

Thus Samuel grew and the Lord was with him and let none of his words fail. All Israel from Dan even to Beersheba knew that Samuel was confirmed as a prophet of the Lord. And the Lord appeared again at Shiloh, because the Lord revealed Himself to Samuel at Shiloh by the word of the Lord.

When Saul inquired of the Lord, the Lord did not answer him, either by dreams or by Urim or by prophets.

“The Spirit of the Lord spoke by me,
And His word was on my tongue.

Now it came about, as they were sitting down at the table, that the word of the Lord came to the prophet who had brought him back; and he cried to the man of God who came from Judah, saying, “Thus says the Lord, ‘Because you have disobeyed the command of the Lord, and have not observed the commandment which the Lord your God commanded you, but have returned and eaten bread and drunk water in the place of which He said to you, “Eat no bread and drink no water”; your body shall not come to the grave of your fathers.’”

Now the Lord spoke through His servants the prophets, saying,

They rose early in the morning and went out to the wilderness of Tekoa; and when they went out, Jehoshaphat stood and said, “Listen to me, O Judah and inhabitants of Jerusalem, put your trust in the Lord your God and you will be established. Put your trust in His prophets and succeed.”

He did evil in the sight of the Lord his God; he did not humble himself before Jeremiah the prophet who spoke for the Lord. He also rebelled against King Nebuchadnezzar who had made him swear allegiance by God. But he stiffened his neck and hardened his heart against turning to the Lord God of Israel. Furthermore, all the officials of the priests and the people were very unfaithful following all the abominations of the nations; and they defiled the house of the Lord which He had sanctified in Jerusalem.read more.
The Lord, the God of their fathers, sent word to them again and again by His messengers, because He had compassion on His people and on His dwelling place; but they continually mocked the messengers of God, despised His words and scoffed at His prophets, until the wrath of the Lord arose against His people, until there was no remedy.

In the year of King Uzziah’s death I saw the Lord sitting on a throne, lofty and exalted, with the train of His robe filling the temple. Seraphim stood above Him, each having six wings: with two he covered his face, and with two he covered his feet, and with two he flew. And one called out to another and said,
“Holy, Holy, Holy, is the Lord of hosts,
The whole earth is full of His glory.”
read more.
And the foundations of the thresholds trembled at the voice of him who called out, while the temple was filling with smoke. Then I said,
“Woe is me, for I am ruined!
Because I am a man of unclean lips,
And I live among a people of unclean lips;
For my eyes have seen the King, the Lord of hosts.” Then one of the seraphim flew to me with a burning coal in his hand, which he had taken from the altar with tongs. He touched my mouth with it and said, “Behold, this has touched your lips; and your iniquity is taken away and your sin is forgiven.” Then I heard the voice of the Lord, saying, “Whom shall I send, and who will go for Us?” Then I said, “Here am I. Send me!”

“I did not send these prophets,
But they ran.
I did not speak to them,
But they prophesied.
“But if they had stood in My council,
Then they would have announced My words to My people,
And would have turned them back from their evil way
And from the evil of their deeds.

Then He said to me, “Son of man, I am sending you to the sons of Israel, to a rebellious people who have rebelled against Me; they and their fathers have transgressed against Me to this very day. I am sending you to them who are stubborn and obstinate children, and you shall say to them, ‘Thus says the Lord God.’ As for them, whether they listen or not—for they are a rebellious house—they will know that a prophet has been among them.

Hosea 6:5
Verse Concepts
The Effect Of The Word Of GodGod Killed His PeopleGod Spoke By The ProphetsGod KillingLightning Used Metaphorically
Light, NaturalGod Is LightLightningMouthsPeople Cut In Pieces

Therefore I have hewn them in pieces by the prophets;
I have slain them by the words of My mouth;
And the judgments on you are like the light that goes forth.

Surely the Lord God does nothing
Unless He reveals His secret counsel
To His servants the prophets.
A lion has roared! Who will not fear?
The Lord God has spoken! Who can but prophesy?

Zechariah 7:7
Verse Concepts
The ShephelahGod Spoke By The ProphetsGod, Activity Of
God's Activity In IsraelInhabitationSaying The Same Things

Are not these the words which the Lord proclaimed by the former prophets, when Jerusalem was inhabited and prosperous along with its cities around it, and the Negev and the foothills were inhabited?’”

But the things which God announced beforehand by the mouth of all the prophets, that His Christ would suffer, He has thus fulfilled.

Paul, a bond-servant of Christ Jesus, called as an apostle, set apart for the gospel of God, which He promised beforehand through His prophets in the holy Scriptures,

As to this salvation, the prophets who prophesied of the grace that would come to you made careful searches and inquiries, seeking to know what person or time the Spirit of Christ within them was indicating as He predicted the sufferings of Christ and the glories to follow. It was revealed to them that they were not serving themselves, but you, in these things which now have been announced to you through those who preached the gospel to you by the Holy Spirit sent from heaven—things into which angels long to look.

but in the days of the voice of the seventh angel, when he is about to sound, then the mystery of God is finished, as He preached to His servants the prophets.