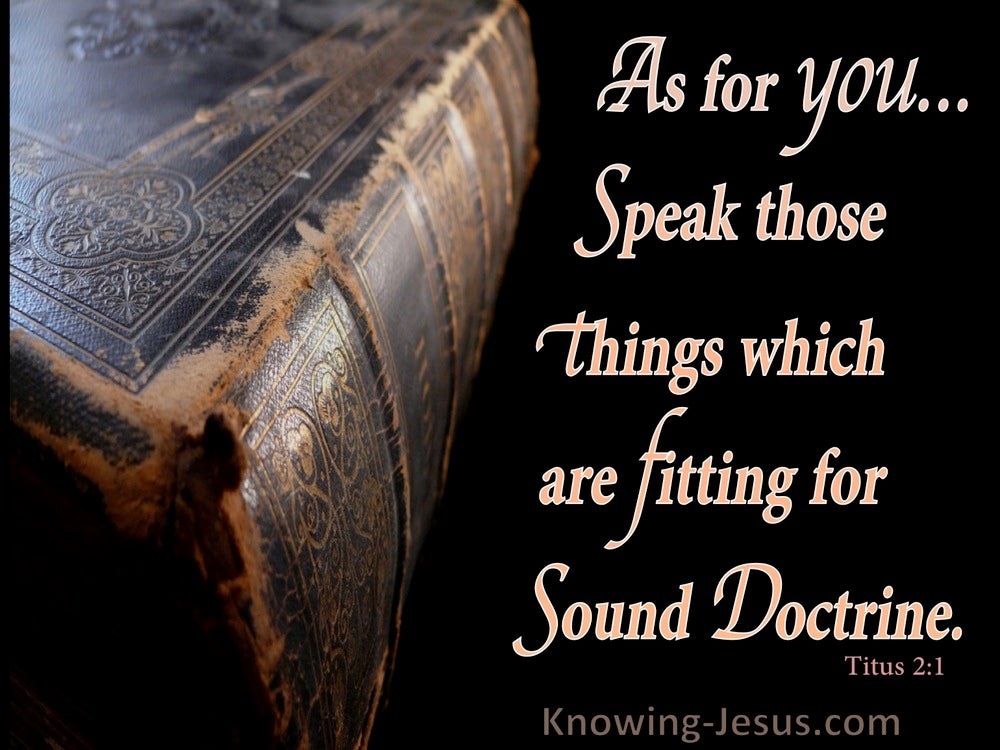 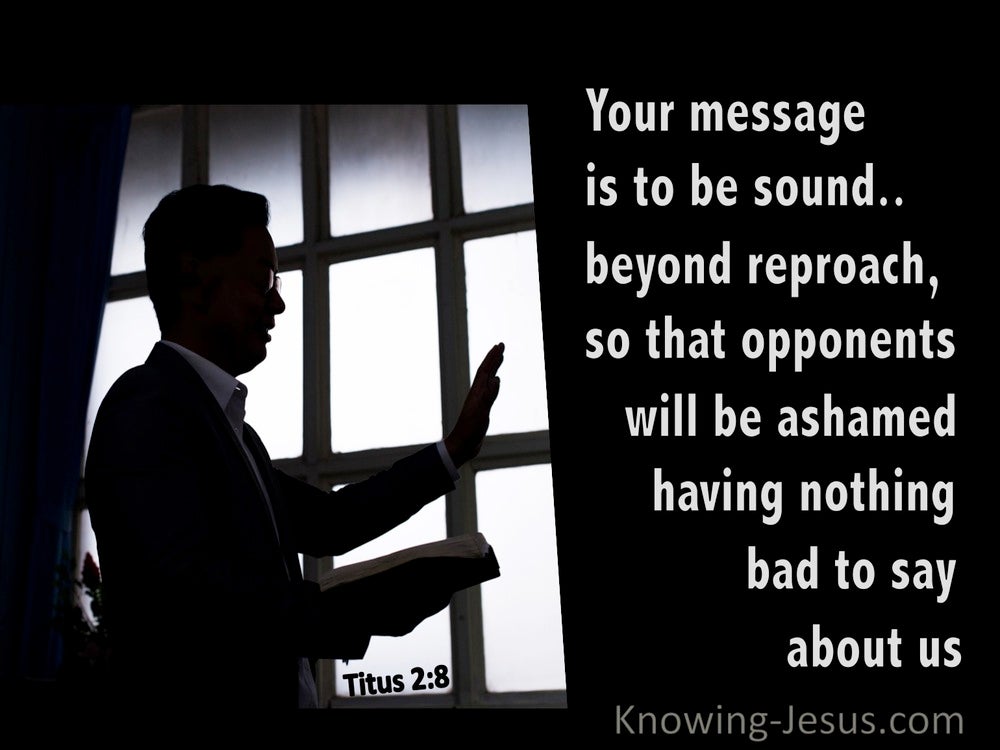 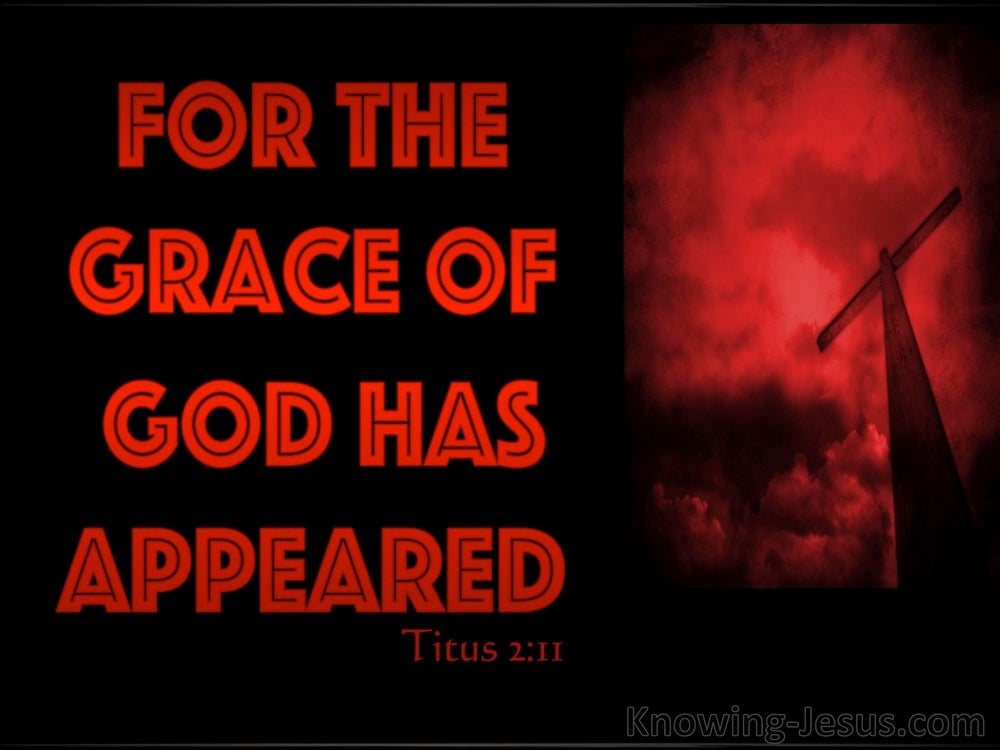 But as for you, speak the things which are fitting for sound doctrine. Older men are to be temperate, dignified, sensible, sound in faith, in love, in perseverance. Older women likewise are to be reverent in their behavior, not malicious gossips nor enslaved to much wine, teaching what is good,read more.
so that they may encourage the young women to love their husbands, to love their children, to be sensible, pure, workers at home, kind, being subject to their own husbands, so that the word of God will not be dishonored. Likewise urge the young men to be sensible; in all things show yourself to be an example of good deeds, with purity in doctrine, dignified, sound in speech which is beyond reproach, so that the opponent will be put to shame, having nothing bad to say about us. Urge bondslaves to be subject to their own masters in everything, to be well-pleasing, not argumentative, not pilfering, but showing all good faith so that they will adorn the doctrine of God our Savior in every respect. For the grace of God has appeared, bringing salvation to all men, instructing us to deny ungodliness and worldly desires and to live sensibly, righteously and godly in the present age, looking for the blessed hope and the appearing of the glory of our great God and Savior, Christ Jesus, who gave Himself for us to redeem us from every lawless deed, and to purify for Himself a people for His own possession, zealous for good deeds.

Deacons likewise must be men of dignity, not double-tongued, or addicted to much wine or fond of sordid gain, but holding to the mystery of the faith with a clear conscience.

For the overseer must be above reproach as God’s steward, not self-willed, not quick-tempered, not addicted to wine, not pugnacious, not fond of sordid gain, but hospitable, loving what is good, sensible, just, devout, self-controlled, holding fast the faithful word which is in accordance with the teaching, so that he will be able both to exhort in sound doctrine and to refute those who contradict.

So it came about whenever the evil spirit from God came to Saul, David would take the harp and play it with his hand; and Saul would be refreshed and be well, and the evil spirit would depart from him.

It happened as they were coming, when David returned from killing the Philistine, that the women came out of all the cities of Israel, singing and dancing, to meet King Saul, with tambourines, with joy and with musical instruments. The women sang as they played, and said,
“Saul has slain his thousands,
And David his ten thousands.”
Then Saul became very angry, for this saying displeased him; and he said, “They have ascribed to David ten thousands, but to me they have ascribed thousands. Now what more can he have but the kingdom?”read more.
Saul looked at David with suspicion from that day on. Now it came about on the next day that an evil spirit from God came mightily upon Saul, and he raved in the midst of the house, while David was playing the harp with his hand, as usual; and a spear was in Saul’s hand. Saul hurled the spear for he thought, “I will pin David to the wall.” But David escaped from his presence twice. Now Saul was afraid of David, for the Lord was with him but had departed from Saul. Therefore Saul removed him from his presence and appointed him as his commander of a thousand; and he went out and came in before the people. David was prospering in all his ways for the Lord was with him. When Saul saw that he was prospering greatly, he dreaded him.

Then Jonathan said to David, “Whatever you say, I will do for you.” So David said to Jonathan, “Behold, tomorrow is the new moon, and I ought to sit down to eat with the king. But let me go, that I may hide myself in the field until the third evening. If your father misses me at all, then say, ‘David earnestly asked leave of me to run to Bethlehem his city, because it is the yearly sacrifice there for the whole family.’read more.
If he says, ‘It is good,’ your servant will be safe; but if he is very angry, know that he has decided on evil.

Now therefore, know and consider what you should do, for evil is plotted against our master and against all his household; and he is such a worthless man that no one can speak to him.”

Now there was a man in Maon whose business was in Carmel; and the man was very rich, and he had three thousand sheep and a thousand goats. And it came about while he was shearing his sheep in Carmel (now the man’s name was Nabal, and his wife’s name was Abigail. And the woman was intelligent and beautiful in appearance, but the man was harsh and evil in his dealings, and he was a Calebite), that David heard in the wilderness that Nabal was shearing his sheep.read more.
So David sent ten young men; and David said to the young men, “Go up to Carmel, visit Nabal and greet him in my name; and thus you shall say, ‘Have a long life, peace be to you, and peace be to your house, and peace be to all that you have. Now I have heard that you have shearers; now your shepherds have been with us and we have not insulted them, nor have they missed anything all the days they were in Carmel. Ask your young men and they will tell you. Therefore let my young men find favor in your eyes, for we have come on a festive day. Please give whatever you find at hand to your servants and to your son David.’” When David’s young men came, they spoke to Nabal according to all these words in David’s name; then they waited. But Nabal answered David’s servants and said, “Who is David? And who is the son of Jesse? There are many servants today who are each breaking away from his master. Shall I then take my bread and my water and my meat that I have slaughtered for my shearers, and give it to men whose origin I do not know?”