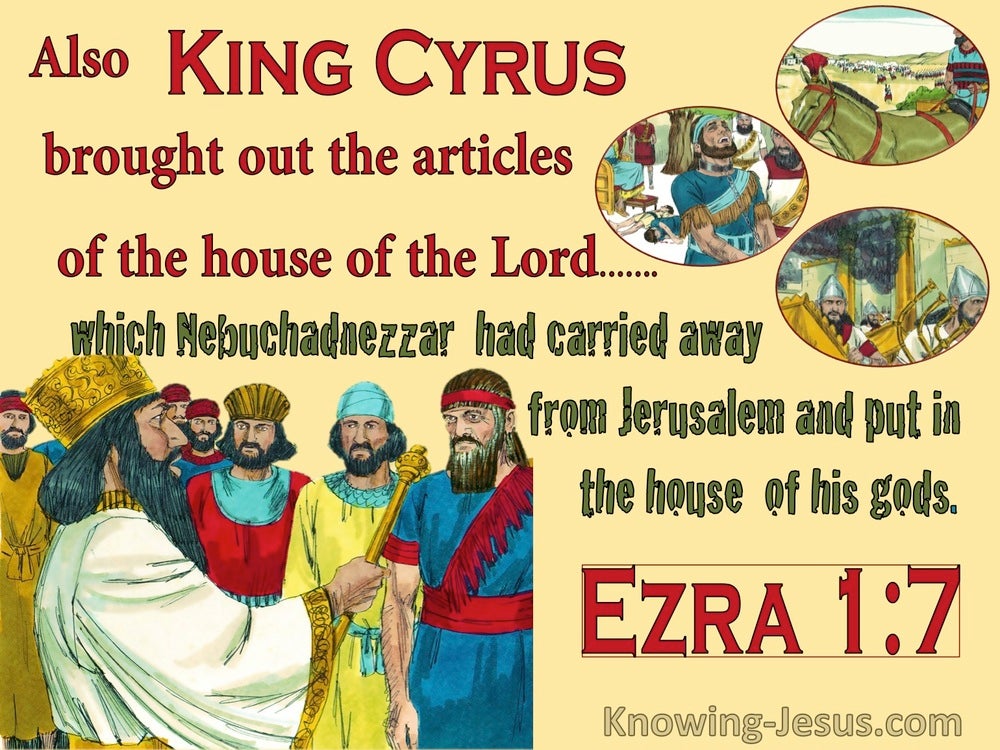 but you have exalted yourself against the Lord of heaven; and they have brought the vessels of His house before you, and you and your nobles, your wives and your concubines have been drinking wine from them; and you have praised the gods of silver and gold, of bronze, iron, wood and stone, which do not see, hear or understand. But the God in whose hand are your life-breath and all your ways, you have not glorified.

Within two years I am going to bring back to this place all the vessels of the Lord’s house, which Nebuchadnezzar king of Babylon took away from this place and carried to Babylon.

Also King Cyrus brought out the articles of the house of the Lord, which Nebuchadnezzar had carried away from Jerusalem and put in the house of his gods;

Also the utensils which are given to you for the service of the house of your God, deliver in full before the God of Jerusalem.

and I weighed out to them the silver, the gold and the utensils, the offering for the house of our God which the king and his counselors and his princes and all Israel present there had offered. Thus I weighed into their hands 650 talents of silver, and silver utensils worth 100 talents, and 100 gold talents, and 20 gold bowls worth 1,000 darics, and two utensils of fine shiny bronze, precious as gold.read more.
Then I said to them, “You are holy to the Lord, and the utensils are holy; and the silver and the gold are a freewill offering to the Lord God of your fathers. Watch and keep them until you weigh them before the leading priests, the Levites and the heads of the fathers’ households of Israel at Jerusalem, in the chambers of the house of the Lord.” So the priests and the Levites accepted the weighed out silver and gold and the utensils, to bring them to Jerusalem to the house of our God.