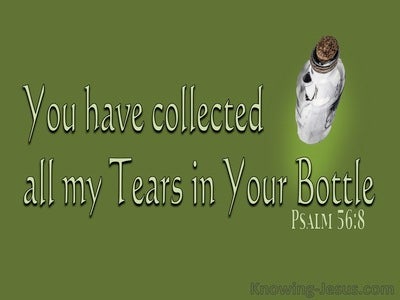 So early the next morning, Abraham got up, took bread and a leather bottle of water, gave them to Hagar, and placed them on her shoulder. He then sent her away, along with the child. She went off and roamed in the Beer-sheba wilderness.

Genesis 21:15
Verse Concepts
No Water For People
Shortage Other Than Food

Eventually, the water in the leather bottle ran out, so she placed the child under one of the bushes.

Then God opened her eyes, and she saw a well of water. So she went, filled the skin with water, and gave the boy a drink.

So he looked around, and there near his head was a muffin sitting on top of some heated stones, along with a jar of water. Elijah ate and drank and then lay down again.

May it be that the young woman to whom I ask, "Please, lower your jug so that I may drink,' responds, "Have a drink, and I'll water your camels as well.' May she be the one whom you have chosen for your servant Isaac. This is how I'll know that you have shown your gracious love to my master."

Before he had finished speaking, Rebekah appeared. She was a daughter of Milcah's son Bethuel. (Milcah was the wife of Abraham's brother Nahor.) She approached the well, carrying a jug on her shoulder.

"Before I had finished praying, along came Rebekah with her jug on her shoulder! She went to the spring and drew some water. I asked her to please let me have a drink.

Then Abraham's servant ran to meet her and asked her, "Please, let me have a sip of water from your jug."

here I am standing by the spring. May it be that the young woman who comes out to draw water, from whom I request a little water from her jug to drink,

"Drink, sir!" she replied as she quickly lowered her jug on her arm to offer him a drink.

She quickly lowered her jug from her shoulder and told me, "Have a drink while I also water your camels.' So I drank, and she also gave my camels water to drink.

She quickly emptied her jug into the trough and ran to the well to draw again until she had drawn enough water for all ten of the servant's camels.

The LORD also told Moses, "Tell Aaron, "Take your staff and stretch out your hand over the waters of Egypt, over their rivers, over their Nile River, over their ponds, and over their reservoirs, and they'll become blood. There will be blood throughout the land of Egypt, even in their wood and stone containers.'"

Keep your eyes on the field where they are harvesting, and follow them. I've ordered my young men not to bother you, haven't I? And when you are thirsty, drink from the water vessels that the young men have filled."

When the silver cord is severed, the golden vessel is broken, the pitcher is shattered at the fountain, and the wheel is broken at the cistern,

Who has the wisdom to be able to count the clouds, or to empty the water jars of heaven,

He sent two of his disciples, telling them, "Go into the city, and you will meet a man carrying a jug of water. Follow him.

He told them, "Just after you go into the city, a man carrying a jug of water will meet you. Follow him into the house he enters

Now standing there were six stone water jars used for the Jewish rites of purification, each one holding from two to three measures.

Then the woman left her water jar and went back to town. She told people,

Then he poured some water into a basin and began to wash the disciples' feet and to dry them with the towel that was tied around his waist.

You have kept count of my wanderings. Put my tears in your bottle have not you recorded them in your book?