"He was despised and rejected by others, and a man of sorrows, intimately familiar with suffering; and like one from whom people hide their faces; and we despised him and did not value him.

He was despised, and rejected of men; a man of sorrows, and acquainted with grief: and as one from whom men hide their face he was despised; and we esteemed him not.

Men made sport of him, turning away from him; he was a man of sorrows, marked by disease; and like one from whom men's faces are turned away, he was looked down on, and we put no value on him.

He is despised and left alone of men; a man of sorrows, and acquainted with grief, and like one from whom men hide their faces; despised, and we esteemed him not.

[He was] despised and rejected [by] men, a man of suffering, and acquainted with sickness, and like {one from whom others hide their faces}, [he was] despised, and we did not hold him in high regard.

He is despised and rejected of men; a Man of sorrows, and acquainted with grief; and as it were a hiding of faces from Him, He being despised, and we esteemed Him not.

He was despised and cast out of men's company; and one that had suffered sorrow, and had experience of infirmity. And we were as one that had hid his face from him.

He was despised and rejected by people, one who experienced pain and was acquainted with illness; people hid their faces from him; he was despised, and we considered him insignificant.

Despised was he, and forsaken of men, Man of pains and familiar with sickness, - Yea, like one from whom the face is hidden, Despised, and we esteemed him not.

He is despised and rejected by men; a man of sorrows, and acquainted with grief: and we hid as it were our faces from him; he was despised, and we esteemed him not.

He was despised, and rejected by men; a man of suffering, and acquainted with disease. He was despised as one from whom men hide their face; and we didn't respect him. 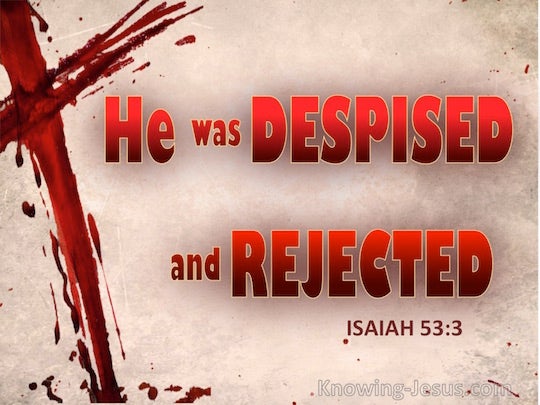 Afflictions » The servant of the lord being afflicted

Christ » Love to » Man of sorrows

Christ » Names of » Man of sorrows

Contempt » The wicked exhibit towards » Christ

Israel » Prophecies concerning » Of their rejection of the messiah

Jews, the » Christ » Rejected by

Names » Of Christ » Man of sorrows

Offence » The wicked take, at » The low station of Christ

Oppression » The servant of the lord being oppressed

Scorning and mocking » The sufferings of Christ by, predicted

Servants » The servant of the lord

Sufferings of Christ » The man of sorrows

Sufferings of Christ » Was despised

with grief
H2483
חלי
Choliy
sickness, disease, grief, sick
Usage: 24
and we hid as it were
H4564
מסתּר
Macter
hid as it were
Usage: 1
our faces
H6440
פּנים
Paniym
before, face, presence, because, sight, countenance, from, person, upon, of, ...me, against, ...him, open, for, toward,
Usage: 2119
from him he was despised
H959
בּזה
Bazah
despise, contemptible, contemned, disdained, vile person, scorn
Usage: 42
and we esteemed
H2803
חשׁב
Chashab
count, devise, think, imagine, cunning, reckon, purpose, esteem, account, impute, forecast, regard, workman, conceived,
Usage: 124

Word Count of 20 Translations in Isaiah 53:3 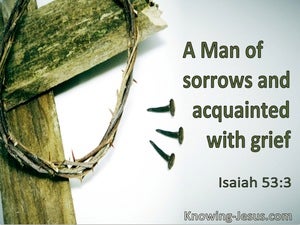 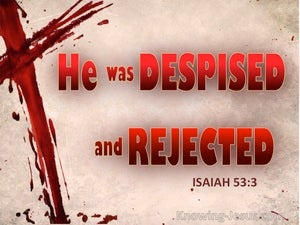 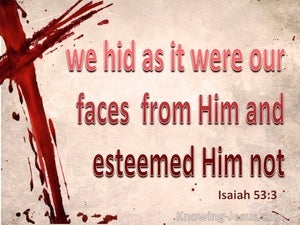 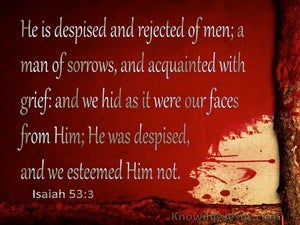 Grief Due To Loss Of A Loved One
A prayer for Isaiah 53:3

2 For he grew up before him as a tender plant, and as a root out of a dry ground. He has no form nor comeliness. And when we see him, there is no beauty that we should desire him. 3 He was despised, and rejected by men, a man of sorrows, and acquainted with grief. And as him from whom men hide their face he was despised, and we esteemed him not. 4 Surely he has borne our griefs, and carried our sorrows. Yet we esteemed him stricken, smitten by God, and afflicted.

Other Readings
The Servant's Suffering And Exaltation

Thus says LORD, the Redeemer of Israel, [and] his Holy One, to him whom man despises, to him whom the nation abhors, to a servant of rulers. Kings shall see and arise, rulers, and they shall worship, because of LORD who is faithful

Yet it pleased LORD to bruise him. He has put him to grief. When thou shall make his soul an offering for sin, he shall see [his] seed. He shall prolong his days, and the pleasure of LORD shall prosper in his hand.

Surely he has borne our griefs, and carried our sorrows. Yet we esteemed him stricken, smitten by God, and afflicted.

But I am a worm, and no man, a reproach of men, and despised by the people.

I gave my back to the smiters, and my cheeks to those who plucked off the hair. I did not hide my face from shame and spitting.

And I cut off the three shepherds in one month, for my soul was weary of them, and their soul also loathed me.

And I said to them, If ye think good, give me my wage, and if not, forbear. So they weighed for my wage thirty [pieces] of silver.

Then they spat in his face and struck him with a fist. And some slapped him,

And having answered, he said to them, Elijah indeed comes first and restores all. And how it is written for the Son of man, that he would suffer many things and be rejected.

When I wept in my soul with fasting, that was to my reproach.

Thou know my reproach, and my shame, and my dishonor. My adversaries are all before thee.

But I am poor and sorrowful. Let thy salvation, O God, set me up on high.

Now thou shall gather thyself in troops, O daughter of troops. He has laid siege against us. They shall smite the judge of Israel with a rod upon the cheek.

And having taken Peter and the two sons of Zebedee, he began to be sorrowful and distressed.

Then that which was spoken through Jeremiah the prophet was fulfilled, which says, And they took the thirty silver pieces, the price of him who was valued, whom they valued from the sons of Israel,

And those who passed by reviled him, shaking their heads,

saying, Sir, we remember that that deceiver said while he was still alive, After three days I am raised.

And he says to them, My soul is deeply grieved, to the point of death. Remain ye here, and watch.

And they struck his head with a reed, and spat upon him, and bowing their knees worshiped him.

And they ridiculed him, knowing that she died.

saying, It is necessary for the Son of man to suffer many things, and be rejected by the elders and chief priests and scholars, and be killed, and the third day to rise.

And the Pharisees, being lovers of money, heard all these things, and they sneered him.

And having taken along the twelve, he said to them, Behold, we are going up to Jerusalem, and all the things that are written through the prophets about the Son of man will be completed.

And when he came near, having seen the city, he wept over it,

But they cried out all together, saying, Take away this man, and release to us Barabbas

Therefore the Jews answered and said to him, Do we not say well that thou are a Samaritan, and have a demon?

The God of Abraham, and of Isaac, and of Jacob, the God of our fathers, has glorified his Boy Jesus, whom ye actually delivered up and denied him in the presence of Pilate who preferred to release that man.

And he might liberate these, as many as throughout all their lifetime were deserving of bondage, with a specter of death.

For we do not have a high priest who is unable to sympathize with our weaknesses, but who was tempted in all things in the same way, without sin.

Who, in the days of his flesh, having offered up both prayers and supplications with strong shouting and tears to him who was able to save him from death, and who was heard because of his reverence,

Looking to Jesus the pathfinder and perfecter of the faith, who, against the joy set before him, endured a cross, having despised the shame, and has sat down at the right hand of the throne of God.