40 Bible Verses about Arts And Crafts, Types of 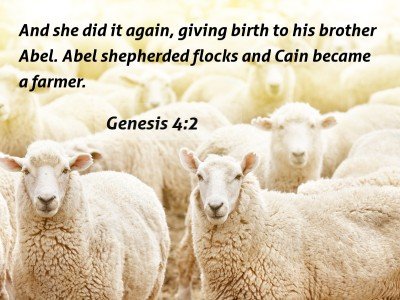 He will appoint his officers over thousands and officers over fifties some will plow his fields, reap his harvest, and craft his war implements and equipment for his chariots.

Some time later, both the senior security advisor to the king of Egypt and his head chef offended their master, Egypt's king.

"Now as for you, Son of Man, you are to go find a sharp sword and use it like a barber's razor. You are to cut your hair and beard. Then you are to take a weighing scale and divide your shaved hair into three parts.

No blacksmith could be found in all the land of Israel because the Philistines thought, "This will keep the Hebrews from making swords or spears."

"You're no longer to give the people straw for making bricks, as in the past. They must gather straw for themselves.

This is the builder, the son of Mary, and the brother of James, Joseph, Judas, and Simon, isn't it? His sisters are here with us, aren't they?" And they were offended by him.

and for cutting stones to set them, for carving wood, and for doing all kinds of craftsmanship.

The wise men and elders from Gebal accompanied you, serving as ship's carpenters. All the maritime navies and their seaman also accompanied you to assist you in doing business internationally."

He will take your daughters for perfumers, cooks, and bakers.

Alexander the metalworker did me a great deal of harm. The Lord will pay him back for what he did.

"And now Son of Man, you are to take a brick, set it in front of you, and inscribe on it the outline of the city that is, Jerusalem.

The LORD told Moses, "Tell the Israelis to take an offering for me, and you are to accept my offering from every person whose heart moves him to give. This is the offering that you are to accept from them: gold, silver, and bronze; read more.
blue, purple, and scarlet material; fine linen and goat hair; ram skins dyed red, dolphin skins, and acacia wood;

After this, he issued orders to his physician servants to embalm his father. So they embalmed Israel.

With work like a jeweler engraves on a signet, you are to inscribe the two stones with the names of the sons of Israel, and you are to mount them in settings of gold filigree.

Jesus asked her, "Dear lady, why are you crying? Who are you looking for?" Thinking he was the gardener, she told him, "Sir, if you have carried him away, tell me where you have put him, and I will take him away."

To an idol? A craftsman makes the image, and a goldsmith overlays it with gold and casts silver chains.

You are to mount on it a setting for four rows of stones. The first row is to contain carnelian, topaz, and emerald; the second row ruby, sapphire, and crystal; the third row jacinth, agate, and amethyst; read more.
the fourth row beryl, onyx, and jasper, and they are to be set in gold filigree. The stones are to correspond to the names of the sons of Israel, twelve stones corresponding to their names. They are to be engraved like a signet, each with the name of one of the twelve tribes.

to cut stones for setting, to carve wood, and to engage in all kinds of artistic work.

and his clothes became dazzling white, whiter than anyone on earth could bleach them.

Later, King Hiram of Tyre sent a delegation to David, accompanied by cedar logs, carpenters, and stone masons. They built a palace for David.

He took them from them and, using a tool, fashioned them into a molten calf. The people said, "This, Israel, is your god who brought you out of the land of Egypt."

David and the entire assembly of Israel were dancing in the presence of the LORD with all of their strength, accompanied by all sorts of wood instruments, harps, tambourines, castanets, and cymbals.

Your sailors were conscripted from Sidon and Arvad, and your officers served aboard as pilots.

How terrible for him who says, "I'll build a large house for myself with spacious upper rooms, who cuts out windows for it, paneling it with cedar and painting it red.'

But who will survive the day when he comes? Or who can stand when he appears? Because he's like a refiner's fire and a launderer's soap,

He told her, "If I'm tied up securely with new ropes that have never been used, then I'll become weak and just like any other human being."

Tell them, "This is what the Lord GOD says, "How terrible it will be for those women who sew magical bracelets on all their wrists and make one-size-fits all headbands, in order to entrap their souls. Will you hunt for the souls of my people and remain alive?

"Surely there are mines for silver and places where gold is refined.

She works with her own hands on her clothes her hands work the sewing spindle.

You are to speak to all who are skilled, whom I've endowed with talent, that they should make Aaron's garments for consecrating him to serve me as priest.

He is a guest of Simon, a leatherworker, whose house is by the sea."

and because they had the same trade he stayed with them. They worked together because they were tentmakers by trade.

At that time I saw in Judah some who were treading wine presses on the Sabbath, bringing in sacks of grain, loading them onto donkeys, along with wine, grapes, figs, and all kinds of loads. They brought them into Jerusalem on the Sabbath day. So I rebuked them on the day on which they were selling food.

Zillah gave birth to Tubal-cain, who became a forger of bronze and iron work. Tubal-cain's sister was Naamah.