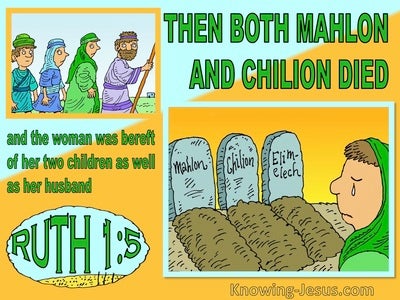 Stay there until your brother's anger against you subsides and he forgets what you did to him. Then I'll send someone to bring you back from there. Why should I lose both of you in one day?"

Their father Jacob said to them, "You are making me childless! Joseph is gone. Simeon is gone. And now you want to take Benjamin! Everything is against me."

The Lord continued, "In every town in the land I will purge them like straw blown away by the wind. I will destroy my people. I will kill off their children. I will do so because they did not change their behavior.

I will send famine and wild beasts against you and they will take your children from you. Plague and bloodshed will overwhelm you, and I will bring a sword against you. I, the Lord, have spoken!"

May the sovereign God grant you mercy before the man so that he may release your other brother and Benjamin! As for me, if I lose my children I lose them."

Then Naomi's two sons, Mahlon and Kilion, also died. So the woman was left all alone -- bereaved of her two children as well as her husband!

Isaiah 47:9
Verse Concepts
Death Of A Childmagicwitches
Pleasure SeekersSuddenlyLosing Someone

Both of these will come upon you suddenly, in one day! You will lose your children and be widowed. You will be overwhelmed by these tragedies, despite your many incantations and your numerous amulets.

"'This is what the sovereign Lord says: Because they are saying to you, "You are a devourer of men, and bereave your nation of children,"

Hushai went on to say, "You know your father and his men -- they are soldiers and are as dangerous as a bear out in the wild that has been robbed of her cubs. Your father is an experienced soldier; he will not stay overnight with the army.

I will attack them like a bear robbed of her cubs -- I will rip open their chests. I will devour them there like a lion -- like a wild animal would tear them apart.

It is better for a person to meet a mother bear being robbed of her cubs, than to encounter a fool in his folly.

Judges 21:3
Verse Concepts
Why Does This Happen?No One To Be Found
Subtracting From People

They said, "Why, O Lord God of Israel, has this happened in Israel?" An entire tribe has disappeared from Israel today!"

Judges 21:6
Verse Concepts
No One To Be Found
Unhappiness

The Israelites regretted what had happened to their brother Benjamin. They said, "Today we cut off an entire tribe from Israel!

Even if they raise their children, I will take away every last one of them. Woe to them! For I will turn away from them.

I will lead people, my people Israel, across you; they will possess you and you will become their inheritance. No longer will you bereave them of their children.

therefore you will no longer devour people and no longer bereave your nation of children, declares the sovereign Lord.

He replied, "While the child was still alive, I fasted and wept because I thought, 'Perhaps the Lord will show pity and the child will live. But now he is dead. Why should I fast? Am I able to bring him back? I will go to him, but he cannot return to me!'"

While this one was still speaking another messenger arrived and said, "Your sons and your daughters were eating and drinking wine in their oldest brother's house, and suddenly a great wind swept across the wilderness and struck the four corners of the house, and it fell on the young people, and they died! And I -- only I alone -- escaped to tell you!" Then Job got up and tore his robe. He shaved his head, and then he threw himself down with his face to the ground. read more.
He said, "Naked I came from my mother's womb, and naked I will return there. The Lord gives, and the Lord takes away. May the name of the Lord be blessed!"

Now we do not want you to be uninformed, brothers and sisters, about those who are asleep, so that you will not grieve like the rest who have no hope. For if we believe that Jesus died and rose again, so also we believe that God will bring with him those who have fallen asleep as Christians. For we tell you this by the word of the Lord, that we who are alive, who are left until the coming of the Lord, will surely not go ahead of those who have fallen asleep. read more.
For the Lord himself will come down from heaven with a shout of command, with the voice of the archangel, and with the trumpet of God, and the dead in Christ will rise first. Then we who are alive, who are left, will be suddenly caught up together with them in the clouds to meet the Lord in the air. And so we will always be with the Lord. Therefore encourage one another with these words.

Even if they raise their children, I will take away every last one of them. Woe to them! For I will turn away from them.

Bereavement » Instances of » David » Of absalom

The king covered his face and cried out loudly, "My son, Absalom! Absalom, my son, my son!"

Bereavement » Instances of » Naomi, of her husband

Sometime later Naomi's husband Elimelech died, so she and her two sons were left alone.

Then Naomi's two sons, Mahlon and Kilion, also died. So the woman was left all alone -- bereaved of her two children as well as her husband!

Bereavement » Instances of » David » Of his child by bath-sheba

Then Nathan went to his home. The Lord struck the child that Uriah's wife had borne to David, and the child became very ill. Then David prayed to God for the child and fasted. He would even go and spend the night lying on the ground. The elders of his house stood over him and tried to lift him from the ground, but he was unwilling, and refused to eat food with them. read more.
On the seventh day the child died. But the servants of David were afraid to inform him that the child had died, for they said, "While the child was still alive he would not listen to us when we spoke to him. How can we tell him that the child is dead? He will do himself harm!" When David saw that his servants were whispering to one another, he realized that the child was dead. So David asked his servants, "Is the child dead?" They replied, "Yes, he's dead." So David got up from the ground, bathed, put on oil, and changed his clothes. He went to the house of the Lord and worshiped. Then, when he entered his palace, he requested that food be brought to him, and he ate. His servants said to him, "What is this that you have done? While the child was still alive, you fasted and wept. Once the child was dead you got up and ate food!" He replied, "While the child was still alive, I fasted and wept because I thought, 'Perhaps the Lord will show pity and the child will live. But now he is dead. Why should I fast? Am I able to bring him back? I will go to him, but he cannot return to me!'"

Bereavement » And to ezekiel, for his wife

"Son of man, realize that I am about to take the delight of your eyes away from you with a jolt, but you must not mourn or weep or shed tears. Groan in silence for the dead, but do not perform mourning rites. Bind on your turban and put your sandals on your feet. Do not cover your lip and do not eat food brought by others." So I spoke to the people in the morning, and my wife died in the evening. In the morning I acted just as I was commanded.

Bereavement » Instances of » The egyptians, of their firstborn

It happened at midnight -- the Lord attacked all the firstborn in the land of Egypt, from the firstborn of Pharaoh who sat on his throne to the firstborn of the captive who was in the prison, and all the firstborn of the cattle. Pharaoh got up in the night, along with all his servants and all Egypt, and there was a great cry in Egypt, for there was no house in which there was not someone dead. Pharaoh summoned Moses and Aaron in the night and said, "Get up, get out from among my people, both you and the Israelites! Go, serve the Lord as you have requested! read more.
Also, take your flocks and your herds, just as you have requested, and leave. But bless me also." The Egyptians were urging the people on, in order to send them out of the land quickly, for they were saying, "We are all dead!"

Bereavement » Instances of » Jacob, of joseph

Then Jacob tore his clothes, put on sackcloth, and mourned for his son many days. All his sons and daughters stood by him to console him, but he refused to be consoled. "No," he said, "I will go to the grave mourning my son." So Joseph's father wept for him.

Bereavement » Instances of » Joseph, of his father

Genesis 50:1
Verse Concepts
People KissingKissingPain
SorrowMourning The Death Of Others

Then Joseph hugged his father's face. He wept over him and kissed him.

When the days of mourning had passed, Joseph said to Pharaoh's royal court, "If I have found favor in your sight, please say to Pharaoh,

Bereavement » Instances of » Abraham, of sarah

Then she died in Kiriath Arba (that is, Hebron) in the land of Canaan. Abraham went to mourn for Sarah and to weep for her.

Bereavement » Mourning in, forbidden to aaron, on account of his sons' wickedness

Then Moses said to Aaron and to Eleazar and Ithamar his other two sons, "Do not dishevel the hair of your heads and do not tear your garments, so that you do not die and so that wrath does not come on the whole congregation. Your brothers, all the house of Israel, are to mourn the burning which the Lord has caused,

Then Jacob tore his clothes, put on sackcloth, and mourned for his son many days.

Though he causes us grief, he then has compassion on us according to the abundance of his loyal kindness.