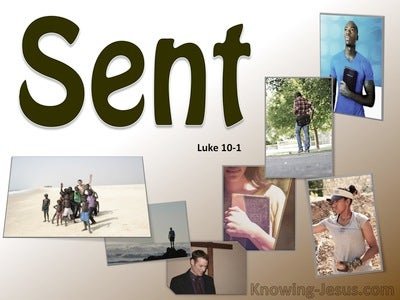 So we built the wall and the whole wall was joined together to half its height, for the people had a mind to work.

Do two men walk together unless they have made an appointment?

Now after this the Lord appointed seventy others, and sent them in pairs ahead of Him to every city and place where He Himself was going to come. And He was saying to them, “The harvest is plentiful, but the laborers are few; therefore beseech the Lord of the harvest to send out laborers into His harvest.

The rabble who were among them had greedy desires; and also the sons of Israel wept again and said, “Who will give us meat to eat? We remember the fish which we used to eat free in Egypt, the cucumbers and the melons and the leeks and the onions and the garlic, but now our appetite is gone. There is nothing at all to look at except this manna.”read more.
Now the manna was like coriander seed, and its appearance like that of bdellium. The people would go about and gather it and grind it between two millstones or beat it in the mortar, and boil it in the pot and make cakes with it; and its taste was as the taste of cakes baked with oil. When the dew fell on the camp at night, the manna would fall with it. Now Moses heard the people weeping throughout their families, each man at the doorway of his tent; and the anger of the Lord was kindled greatly, and Moses was displeased.

Then Naomi her mother-in-law said to her, “My daughter, shall I not seek security for you, that it may be well with you? Now is not Boaz our kinsman, with whose maids you were? Behold, he winnows barley at the threshing floor tonight. Wash yourself therefore, and anoint yourself and put on your best clothes, and go down to the threshing floor; but do not make yourself known to the man until he has finished eating and drinking.read more.
It shall be when he lies down, that you shall notice the place where he lies, and you shall go and uncover his feet and lie down; then he will tell you what you shall do.” She said to her, “All that you say I will do.” So she went down to the threshing floor and did according to all that her mother-in-law had commanded her. When Boaz had eaten and drunk and his heart was merry, he went to lie down at the end of the heap of grain; and she came secretly, and uncovered his feet and lay down. It happened in the middle of the night that the man was startled and bent forward; and behold, a woman was lying at his feet. He said, “Who are you?” And she answered, “I am Ruth your maid. So spread your covering over your maid, for you are a close relative.” Then he said, “May you be blessed of the Lord, my daughter. You have shown your last kindness to be better than the first by not going after young men, whether poor or rich. Now, my daughter, do not fear. I will do for you whatever you ask, for all my people in the city know that you are a woman of excellence. Now it is true I am a close relative; however, there is a relative closer than I. Remain this night, and when morning comes, if he will redeem you, good; let him redeem you. But if he does not wish to redeem you, then I will redeem you, as the Lord lives. Lie down until morning.” So she lay at his feet until morning and rose before one could recognize another; and he said, “Let it not be known that the woman came to the threshing floor.” Again he said, “Give me the cloak that is on you and hold it.” So she held it, and he measured six measures of barley and laid it on her. Then she went into the city. When she came to her mother-in-law, she said, “How did it go, my daughter?” And she told her all that the man had done for her. She said, “These six measures of barley he gave to me, for he said, ‘Do not go to your mother-in-law empty-handed.’” Then she said, “Wait, my daughter, until you know how the matter turns out; for the man will not rest until he has settled it today.”