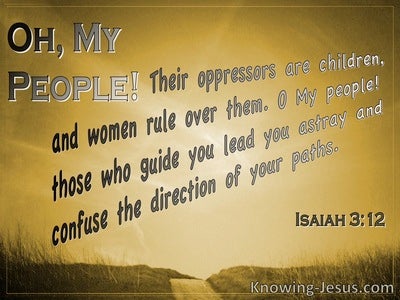 So they turned and departed and put the little ones and the cattle and the baggage before them.

gather the people, sanctify the meeting, assemble the elders, gather the children and those that suck the breasts; let the bridegroom go forth of his chamber and the bride out of her closet.

And he said, Blessed be thou of the LORD, my daughter, for thou hast shown more mercy in the end than at the first, not going after the young men, whether poor or rich.

Even the young children despised me; as I arose, they spoke against me.

And I will give children to be their princes, and young fools shall rule over them.

The oppressors of my people are many, and women rule over him. O my people, those who lead thee cause thee to err and twist the way of thy paths.

And whosoever shall receive one such little child in my name receives me.

And taking a child, he set him in the midst of them; and taking him in his arms, he said unto them,

Luke 9:47
Verse Concepts
Side Of PeopleThought
Christ Knowing About People

But Jesus, seeing the thoughts of their heart, took a child and set him by him,

But whosoever shall cause one of these little ones who believe in me to fall, it would be better for him that a millstone such as is turned by an ass be hanged about his neck and that he be sunk in the depth of the sea.

And whosoever shall be a stumbling block to one of these little ones that believe in me, it would be better for him if a millstone were hanged about his neck, and he were cast into the sea.

It would be better for him if a millstone turned by an ass were placed around his neck and he were cast into the sea than that he should cause one of these little ones to stumble.

Take heed that ye despise not one of these little ones; for I say unto you, That in the heavens their angels always behold the face of my Father who is in the heavens.

Even so it is not the will of your Father who is in the heavens that one of these little ones should perish.

But we were gentle among you, as a mother feeding and caring for her children,

Rebuke not an elder, but intreat him as a father, and the younger men as brethren,

the elder women as mothers, the younger as sisters, with all purity.