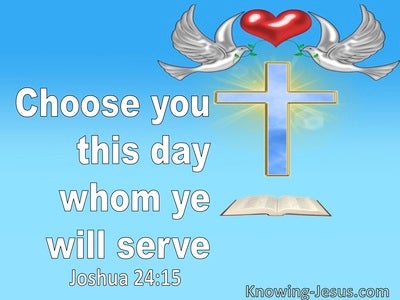 And so then, please let my lord the king listen to the words of his servant: If Yahweh has incited you against me, may he delight in an offering; but if {it is mortals}, [may] they be accursed {before} Yahweh, for they have driven me away today from sharing in the inheritance of Yahweh, saying, 'Go, serve other gods!'

But if it is bad in your eyes to serve Yahweh, choose for yourselves today whom you want to serve, whether it is the gods that your ancestors served beyond the river, or the gods of the Amorites in whose land you [are] living; but as for me and my household, we will serve Yahweh."

Deuteronomy 7:4
Verse Concepts
IntermarriageGod Will Be Angry
Idolatry Consists Of

For their sons and daughters will cause your son to turn away {from following me}, and [so] they will serve other gods, and {the anger of Yahweh would be kindled} against you, and he would quickly destroy you.

from the nations which Yahweh had said to the {Israelites}, "You shall not {marry them}, and they shall not {marry you}. They will certainly turn your heart after other gods." But Solomon clung to them to love.

It happened at the time of Solomon's old age that his wives guided his heart after other gods, and his heart was not fully with Yahweh his God as the heart of David his father [had been].

{Take care} so that your heart is not easily deceived, and you turn away, and you serve other gods, and you bow down to them.

"If your brother, the son of your mother or your son or your daughter {or your wife whom you embrace} or {your intimate friend} in secrecy {says}, 'Let us go and let us serve other gods!' [gods] that you and your ancestors have not known,

{worthless men} have gone out from your midst and have seduced the inhabitants of their town, {saying}, 'Let us go and serve other gods!' whom you have not known,

and the sign or the wonder comes [about] that he spoke to you, {saying}, 'Let us go after other gods (those whom you have not known), and let us serve them,'

so that they may not teach you to do like all their detestable things that they do for their gods and [thereby] you sin against Yahweh your God.

And even some of the Epicurean and Stoic philosophers were conversing with him, and some were saying, "What does this babbler want to say?" But [others said], "He appears to be a proclaimer of foreign deities," because he was proclaiming the good news [about] Jesus and the resurrection.