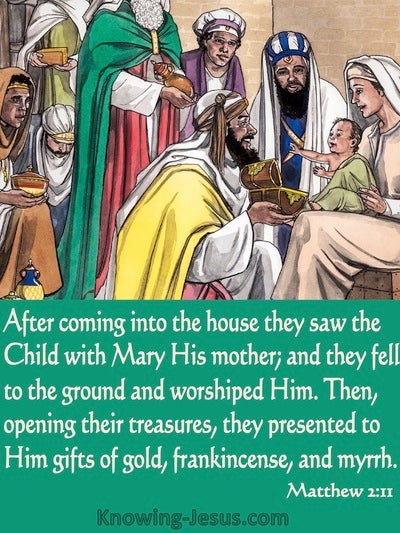 Then the man came into the house, and Laban ungirded his camels and gave straw and fodder for the camels and water to wash his feet and the men's feet that were with him.

And entering into the house, salute it.

And it came to pass about this time, that Joseph went into the house to do his business, and none of those of the house were there within.

Then spirit entered into me and set me upon my feet, and he spoke with me and said unto me, Go, shut thyself within thine house.

Then Jeroboam's wife arose and departed and came to Tirzah; and as she entered by the threshold of the house, the child died.

and entered into the house of Zacharias and saluted Elisabeth.

And entering into the house, they saw the young child with Mary his mother; and falling down, they worshipped him; and opening their treasures, they offered him gifts: gold and frankincense and myrrh.

And when Jesus was come into Peter's house, he saw his wife's mother lying in bed and with fever.

And forthwith, when they were come out of the synagogue, they entered into the house of Simon and Andrew, with James and John.

And one of the Pharisees asked him if he would eat with him. And he went into the Pharisee's house and sat down to food.

Matthew 9:28
Verse Concepts
Ability, Of ChristDrawing Near To Christ
AssentingBlindness

And when he was come into the house, the blind men came to him; and Jesus said unto them, Believe ye that I am able to do this? They said unto him, Yes, Lord.

Then Jesus sent the multitude away and went into the house, and his disciples came unto him, saying, Declare unto us the parable of the tares of the field.

And when he was entered into the house from the people, his disciples asked him concerning the parable.

And from there he arose and went into the borders of Tyre and Sidon, and entering into a house, desired that no man know of it; but he could not be hid.

And when he came into the house, he allowed no one to go in except Peter and James and John and the father and the mother of the maiden.

And they laughed him to scorn. But when he had put them all out, he took the father and the mother of the damsel and those that were with him and entered in where the damsel was lying.

He said, Yes. And when he was come into the house, Jesus spoke unto him first, saying, What thinkest thou, Simon? of whom do the kings of the earth take custom or tribute? of their own sons or of strangers?

And he said unto them, In whatever place ye enter into a house, there abide until ye depart from that place.

And whatever house ye enter into, abide there and depart from there.

And into whatever house ye enter, first say, Peace be to this house.

And he said unto them, Behold, when ye are entered into the city, there ye shall find a man bearing a pitcher of water; follow him into the house where he enters in.