18 Bible Verses about Exploits Of Faith 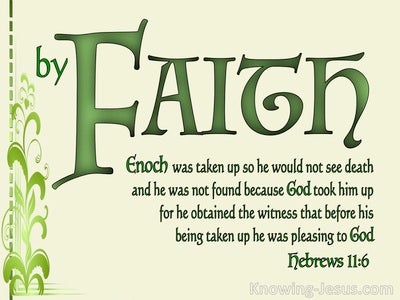 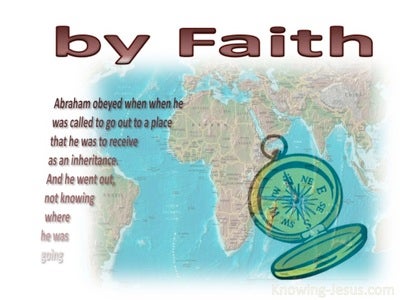 Through faith Enoch was taken from the earth so that he did not see death, and he could not be found, because God had taken him; for before he was taken we have evidence that he truly pleased God.

Through faith Abraham, upon being called to leave home and go into a land which he was soon to receive for an inheritance, obeyed; and he went out, not knowing where he was going to.

Through faith he came and made his home for a time in a land which had been promised to him, as if in a foreign country, living in tents together with Isaac and Jacob, sharers with him in the same promise;

Through faith even Sarah herself received strength to become a mother--although she was past the time of life for this--because she judged Him faithful who had given the promise.

All these died in the possession of faith. They had not received the promised blessings, but had seen them from a distance and had greeted them, and had acknowledged themselves to be foreigners and strangers here on earth;

Through faith Abraham, as soon as God put him to the test, offered up Isaac. Yes, he who had joyfully welcomed the promises was on the point of sacrificing his only son

Through faith Isaac blessed Jacob and Esau, even in connexion with things soon to come.

Through faith Jacob, when dying, blessed each of Joseph's sons, and, leaning on the top of his staff, worshipped God.

Through faith Joseph, when he was near his end, made mention of the departure of the descendants of Israel, and gave orders about his own body.

Through faith the child Moses was hid for three months by his parents, because they saw his rare beauty; and the king's edict had no terror for them.

Through faith Moses, when he grew to manhood, refused to be known as Pharaoh's daughter's son,

Through faith he left Egypt, not being frightened by the king's anger; for he held on his course as seeing the unseen One.

Through faith he instituted the Passover, and the sprinkling with blood so that the destroyer of the firstborn might not touch the Israelites.

Through faith they passed through the Red Sea as though they were passing over dry land, but the Egyptians, when they tried to do the same, were swallowed up.

Through faith the walls of Jericho fell to the ground after being surrounded for seven days.

Through faith the notorious sinner Rahab did not perish along with the disobedient, for she had welcomed the spies and had sheltered them.