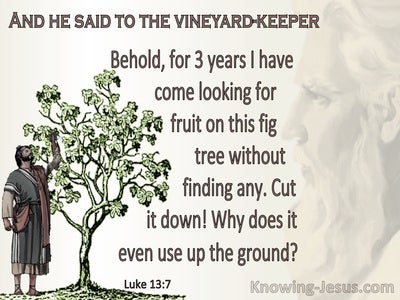 For instance, he may have accompanied his friend to go to a forest to cut trees. Then he swung his axe to cut some wood, but the ax head flew off the handle and hit his friend, so that he died. The killer may flee to one of these cities to live.

Now therefore please order that cedars of Lebanon be cut for me. My servants will work with your servants, and I will pay your servants whatever wages you set, because you know there is no one among us who knows how to cut timber like the Sidonians do."

"I'm willing," he replied. So he accompanied them, and when they came to the Jordan River, they cut down some trees.

"When you attack a city and have to fight against it for many days, don't destroy its trees by cutting them down with an ax. You may eat from them, but you must not cut them down. Are the trees of the field human beings, that you would come and attack them?

However, you may cut down the trees whose fruit you know isn't edible, in order to build siege works against the city that waged war with you, until it falls."

They destroyed their cities, and all of them threw stones onto every piece of farm land, ruining the fields. Then they filled in all the water wells and chopped down all of the useful trees. Stone walls remained surrounding Kir-hareseth only, until the archers surrounded and attacked that city.

I'll appoint people to destroy you men with their weapons. They'll cut down some of your choice cedars and incinerate them.

For this is what the LORD of the Heavenly Armies says: "Cut down trees and set up siege works against Jerusalem. It is the city to be judged, and there is oppression throughout the entire city.

The ax already lies against the roots of the trees. So every tree that isn't producing good fruit will be cut down and thrown into the fire.

Every tree that doesn't produce good fruit will be cut down and thrown into a fire.

The ax already lies against the roots of the trees. So every tree not producing good fruit will be cut down and thrown into a fire."

Her cry will be like that of a fleeing serpent when they come in strength. They're coming to her with axes like woodcutters.

As one blazes a trail through a forest with an ax,

Even the cypresses rejoice over you, as do the cedars of Lebanon, saying, "Now that you've been laid low, no woodcutter comes up against us.'

He called out aloud:

"Your majesty saw a holy observer descending from heaven and saying, "Cut down the tree and destroy it, but leave the stump in the ground, along with its roots, bound with iron and bronze in the field grass. Let him be soaked with the dew of the sky and live with the wild animals of the field until seven seasons pass over him.'

So he told the gardener, "Look here! For three years I've been coming to look for fruit on this tree but I haven't found any. Cut it down! Why should it waste the soil?'

Maybe next year it will bear fruit. If not, then cut it down.'"

He cuts down cedars, or chooses a cypress tree or an oak, and lets it grow strong among the trees of the forest. Or he plants a cedar, and the rain makes it grow.

By your messengers you have insulted the LORD. You have claimed, "With my many chariots I ascended the heights of the mountains, including the remotest regions of Lebanon; I cut down its tall cedars and the best of its cypress trees. I entered its most remote lodging place and its most fruitful forest.

They'll cut down her forest, though it's impenetrable," declares the LORD, "for they're more numerous than locusts, and there are too many of them to count.

By your messengers you have insulted the LORD, and you have said, "With my many chariots I have climbed the heights of mountains, the utmost heights of Lebanon. I cut down its tallest cedars, the choicest of its pines; I reached its remotest heights, the most verdant of its forests.

was burned with fire, cut off, and destroyed on account of your rebuke.

Wail, cypress tree, for the cedar has fallen while the stately trees are destroyed. Wail, oak trees of Bashan, for the old growth forest has been cut down.