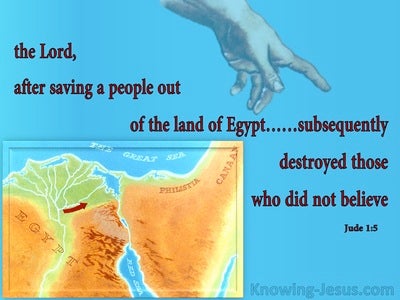 And fire came out from the LORD and consumed the two hundred and fifty men that offered incense.

Your eyes have seen what the LORD did because of Baalpeor; for all the men that followed Baalpeor, the LORD thy God has destroyed them from among you.

And the LORD smote Benjamin before Israel, and the sons of Israel destroyed of the Benjamites that day twenty-five thousand one hundred men; all these drew the sword.

Then God smote those of Bethshemesh because they had looked at the ark of the LORD; he smote fifty thousand of the people and seventy principal men. And the people lamented because the LORD had smitten the people with such a great slaughter.

the wrath of God came upon them and slew the fattest of them and smote down the chosen of Israel.

Daleth He has bent his bow like an enemy; he strengthened his right hand as an adversary and slew everything of beauty that could be seen in the tent of the daughter of Zion; he poured out his fury like fire.

Samech Thou hast unfurled anger and persecuted us; thou hast slain, thou hast not forgiven.

Has he been smitten as he who smote him? or has he been slain as those who slew him?

When he slew them, then they sought him, and they returned and enquired early after God.

I will, therefore, remind you, though ye once knew this, how that the Lord, having saved the people out of the land of Egypt, afterward destroyed those that did not believe.

I have sent among you the pestilence in the way to Egypt; your young men have I slain with the sword, and have taken away your horses; and I have made the stink of your camps to come up unto your nostrils; and ye never returned unto me, said the LORD.

Because the LORD was not able to bring this people into the land which he swore unto them; therefore, he has slain them in the wilderness.

And he said unto them, Defile the house and fill the courts with the slain; go forth. And they went forth and slew in the city.

Schin The young and the old lay on the ground in the streets; my virgins and my young men fell by the sword; thou hast slain them in the day of thine anger; thou hast killed and hast not forgiven.