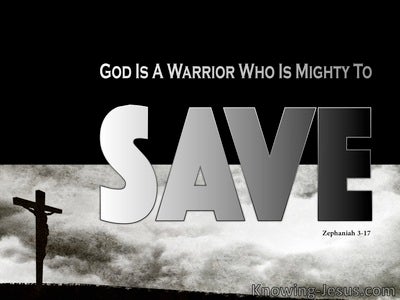 Sing to the LORD a new song, for he has done awesome deeds! His right hand and powerful arm have brought him victory.

and the LORD threw Sisera, all the chariots, and his entire army into a panic right in front of Barak. Then Sisera abandoned his chariot and escaped on foot

While Samuel was sacrificing the burnt offering, the Philistines approached to attack Israel. But that day the LORD thundered against the Philistines and threw them into panic, and they were defeated before Israel.

Whenever the ark was ready to travel, Moses would say: "Arise, LORD, to scatter your enemies, so that whoever hates you will flee from your presence."

The LORD marches out like a warrior; he stirs up his rage like a man of war; he makes his anger heard; he shouts aloud; he declares his mastery over his enemies:

You marched out to deliver your people, to deliver with your anointed. You struck the head of the house of the wicked; you stripped him naked from head to foot. Interlude

The LORD your God among you is powerful he will save and he will take joyful delight in you. In his love he will renew you with his love; he will celebrate with singing because of you.