23 Bible Verses about Ready For War 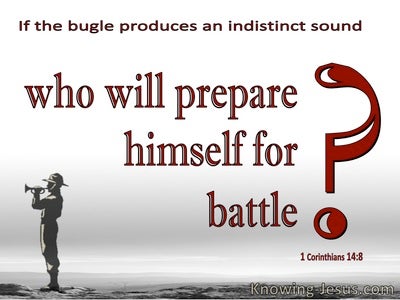 "Or suppose a king is going to war against another king. He will first sit down and consider whether with 10,000 men he can fight the one coming against him with 20,000 men, won't he?

Who is the King of Glory? The LORD strong and mighty, the LORD, mighty in battle.

One spring day, during the time of year when kings go off to war, David sent out Joab, along with his personal staff and all of Israel's army. They utterly destroyed the Ammonites and then attacked Rabbah while David remained in Jerusalem.

"Declare this among the nations: "Prepare for war! Wake up your elite forces! Let all the soldiers draw near! Call them up!

only so that successive Israeli generations, who had not known war previously, might come to know it by experience.

Blessed be the LORD, my rock, who trains my hands for battle and my fingers for warfare,

He has trained my hands for battle readiness I can bend a bow made out of bronze.

who teaches my hands to make war, and my arms to bend a bronze bow.

"Take them alive, whether they've come in peace or not," he ordered.

"You know how strong your father and his men are. They're as mad as a bear robbed of her cubs! Furthermore, your father is a skilled warrior. He won't stay with his army at night.

"You know that my father David was unable to build a temple dedicated to the LORD his God because he was busy fighting wars all around him until the LORD defeated his enemies.

1Obadiah's vision: This is what the Lord God has to say about Edom. We have heard a report from the Lord, and a messenger has been dispatched among the nations to say "Get up! Let us rise up against her to fight!"

"When a strong man, fully armed, guards his own mansion, his property is safe.

Timothy, my child, I am instructing you in keeping with the prophecies made earlier about you, so that by following them you may continue to fight the good fight

Revelation 2:16
Verse Concepts
Weapons Of ChristThe Timing Of His ComingOther References To MouthsMouths
Opposition, To Sin And EvilThe Sword Of The SpiritGod Not Delaying

So repent. If you don't, I will come to you quickly and wage war against them with the sword of my mouth.

For example, if a bugle doesn't sound a clear call, who will get ready for battle?

Jeremiah 4:19
Verse Concepts
Other References To The HeartheartbeatWarTragedyAgony, In Heart
Agony, God's JudgmentRenewed HeartBowelsTrumpets For Battle

"My anguish, my anguish! I writhe in pain. Oh, the aching of my heart! My heart pounds within me; I cannot keep silent. For I hear the sound of the trumpet, the alarm for war.

which I've reserved for the tribulation to come, for the day of battle and war?