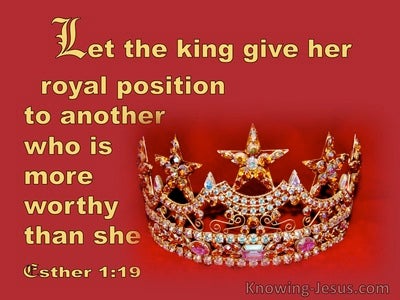 Woe to those [judges] who issue unrighteous decrees, and to the magistrates who keep causing unjust and oppressive decisions to be recorded,

And Joseph made it a law over the land of Egypt -- "to this day -- "that Pharaoh should have the fifth part [of the crops]; it was the priests' land only which did not become Pharaoh's.

If it pleases the king, let a royal command go forth from him and let it be written among the laws of the Persians and Medes, so that it may not be changed, that Vashti is to [be divorced and] come no more before King Ahasuerus; and let the king give her royal position to another who is better than she.

Now, O king, establish the decree and sign the writing that it may not be changed, according to the law of the Medes and Persians, which cannot be altered.

Then they came near and said before the king concerning his prohibitory decree, Have you not signed an edict that any man who shall make a petition to any god or man within thirty days, except of you, O king, shall be cast into the den of lions? The king answered and said, The thing is true, according to the law of the Medes and Persians, which cannot be changed or repealed.

Then these same men came thronging [by agreement] to the king and said, Know, O king, that it is a law of the Medes and Persians that no decree or statute which the king establishes may be changed or repealed.

If then you have died with Christ to material ways of looking at things and have escaped from the world's crude and elemental notions and teachings of externalism, why do you live as if you still belong to the world? [Why do you submit to rules and regulations? -- "such as]