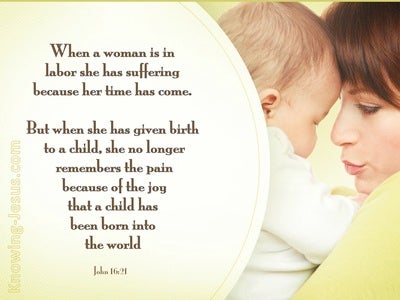 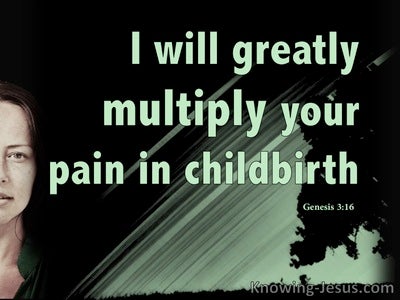 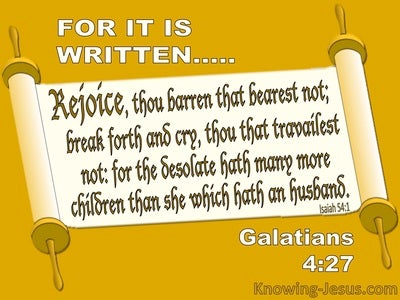 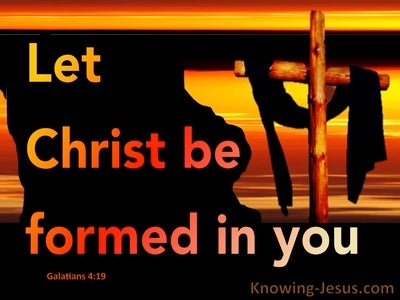 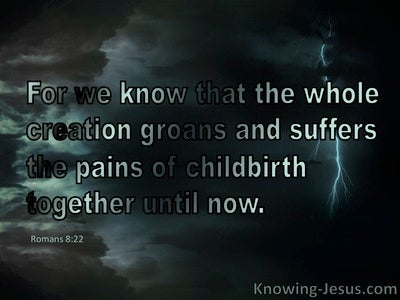 To the woman he said, "I will greatly increase {your pain in childbearing}; in pain you shall bear children. And to your husband [shall be] your desire. And he shall rule over you."

A woman, when she gives birth, experiences pain because her hour has come. But when [her] child is born, she no longer remembers the affliction, on account of the joy that a human being has been born into the world.

and {who was pregnant} and was crying out [because she] was having birth pains, and was in torment to give birth.

The labor pains of childbirth come for him; he [is] an unwise son because [at the] proper time, he does not present himself {at the mouth of the womb}.

Therefore he will give them up until the time of she who is with child has given birth. And the rest of his brothers will return to the children of Israel.

For it is written, "Rejoice, O barren woman, who does not give birth to [children]; burst out and shout, [you] who do not have birth pains, because many [are] the children of the desolate [woman], even more than [those of] the one who has a husband."

and they will be dismayed. Pangs and labor pains will seize [them]; they will tremble like a woman giving birth. {They will stare at one another}, {their faces flushing}.

Trembling seized them there-- pain as of a woman in labor.

What will you say when he sets over you-- and you have taught them--allies as head over you? Will not labor pains take hold of you, like a woman giving birth?

Inhabitants of Lebanon, nestled among the cedars, how you will groan when labor pains come to you, fear and pain as the [woman who] gives birth.

Jeremiah 30:6
Verse Concepts
babyHaving A Baby
Birth Not Being Possible

Ask please and see whether a male can bear a child. Why [do] I see every strong man [with] his hands on his loins like a woman giving birth? And [why] are all [their] faces changed to paleness?

Jeremiah 49:24
Verse Concepts
Unable To Do Other Things
damascus

Damascus has grown slack. She has turned away to flee and panic. Anxiety has seized [her], and labor pains have grasped her, like a woman in labor.

The king of Babylon heard their report and his hands grew slack. Anxiety has seized him, fear and pain like the [woman who] gives birth.

Therefore my loins are filled [with] anguish; pangs have seized me, like [the] pangs of a woman giving birth. I am {too bent to hear}, I am {too dismayed to see}.

I have been silent for a long time; I have kept silent; I have restrained myself like one giving birth; I will moan, pant, and gasp together.

We have heard news of it, our hands grow slack, anxiety has grasped us, pain as a [woman who] gives birth.

Like pregnant woman on the point of giving birth, she writhes; she cries in her labor pains. So we were because of your presence, Yahweh. We became pregnant, we writhed; we gave birth [to] wind. We cannot bring about deliverance [on the] earth, and no inhabitants of [the] world are born.

For I heard a voice like an ill woman, anxiety like [a woman who] bears her first child, the voice of the daughter of Zion. She is gasping for breath, she is spreading out her hands: "Woe is me, for I am becoming tired before killers."

Kerioth will be taken, and the strongholds will be conquered, and the hearts of the warriors of Moab will be on that day like [the] heart of a woman [who] is in labor.

Look, like an eagle he will go up and he will swoop down, and he will spread out his wings against Bozrah. And the heart of the warriors of Edom will be in that day like [the] heart of a woman [who] is in labor.

Micah 4:9
Verse Concepts
No KingWhy Do You Do This?
ChildbirthGroups Shouting

So then, why do you shout a loud shout? Is there no king in you? Has your counselor perished that pangs like a woman in labor have seized you?

Writhe and groan, O daughter of Zion, like a woman in labor. For now you will go forth from the city, and you will camp in the field; you will go to Babylon. There you will be rescued; there Yahweh will redeem you from the hand of your enemies.

My children, for whom I am having birth pains again, until Christ is formed in you!

But all these [things] [are] the beginning of birth pains.

For nation will rise up against nation and kingdom against kingdom. There will be earthquakes in [various] places. There will be famines. These [things] [are] the beginning of birth pains.

Whenever they say "Peace and security," then sudden destruction will overtake them like the birth pains of {a pregnant woman}, and they will not possibly escape.

For we know that the whole creation groans together and suffers agony together until now.