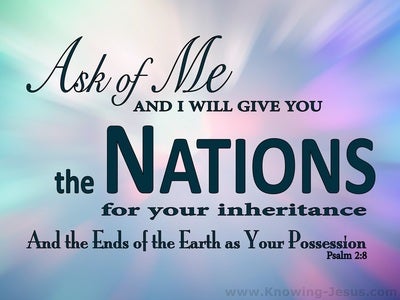 'Thou, O king, art a king of kings, for the God of the heavens a kingdom, strength, and might, and glory, hath given to thee; and whithersoever sons of men are dwelling, the beast of the field, and the fowl of the heavens, He hath given into thy hand, and hath caused thee to rule over them all; thou art this head of gold. And after thee doth rise up another kingdom lower than those, and another third kingdom of brass, that doth rule overall the earth.read more.
And the fourth kingdom is strong as iron, because that iron is breaking small, and making feeble, all things, even as iron that is breaking all these, it beateth small and breaketh. As to that which thou hast seen: the feet and toes, part of them potter's clay, and part of them iron, the kingdom is divided: and some of the standing of the iron is to be in it, because that thou hast seen the iron mixed with miry clay. As to the toes of the feet, part of them iron, and part of them clay: some part of the kingdom is strong, and some part of it is brittle. Because thou hast seen iron mixed with miry clay, they are mixing themselves with the seed of men: and they are not adhering one with another, even as iron is not mixed with clay. And in the days of these kings raise up doth the God of the heavens a kingdom that is not destroyed -- to the age, and its kingdom to another people is not left: it beateth small and endeth all these kingdoms, and it standeth to the age.

And Jehovah hath become king over all the land, In that day there is one Jehovah, and His name one.

Gird Thy sword upon the thigh, O mighty, Thy glory and Thy majesty! As to Thy majesty -- prosper! -- ride! Because of truth, and meekness -- righteousness, And Thy right hand showeth Thee fearful things. Thine arrows are sharp, -- Peoples fall under Thee -- In the heart of the enemies of the king.read more.
Thy throne, O God, is age-during, and for ever, A sceptre of uprightness Is the sceptre of Thy kingdom.

The Lord on thy right hand smote kings In the day of His anger. He doth judge among the nations, He hath completed the carcases, Hath smitten the head over the mighty earth.

Thou hast multiplied the nation, Thou hast made great its joy, They have joyed before Thee as the joy in harvest, As men rejoice in their apportioning spoil. Because the yoke of its burden, And the staff of its shoulder, the rod of its exactor, Thou hast broken as in the day of Midian. For every battle of a warrior is with rushing, and raiment rolled in blood, And it hath been for burning -- fuel of fire.

Jehovah as a mighty one goeth forth. As a man of war He stirreth up zeal, He crieth, yea, He shrieketh, Against His enemies He showeth Himself mighty.

And He putteth on righteousness as a breastplate, And an helmet of salvation on His head, And He putteth on garments of vengeance for clothing, And is covered, as with an upper-robe, with zeal. According to deeds -- so He repayeth. Fury to His adversaries, their deed to His enemies, To the isles their deed He repayeth. And they fear from the west the name of Jehovah, And from the rising of the sun -- His honour, When come in as a flood doth an adversary, The Spirit of Jehovah hath raised an ensign against him.

I was seeing in the visions of the night, and lo, with the clouds of the heavens as a son of man was one coming, and unto the Ancient of Days he hath come, and before Him they have brought him near. And to him is given dominion, and glory, and a kingdom, and all peoples, nations, and languages do serve him, his dominion is a dominion age-during, that passeth not away, and his kingdom that which is not destroyed.

Ask of Me and I give nations -- thy inheritance, And thy possession -- the ends of earth. Thou dost rule them with a sceptre of iron, As a vessel of a potter Thou dost crush them.'

And he ruleth from sea unto sea, And from the river unto the ends of earth. Before him bow do the inhabitants of the dry places, And his enemies lick the dust. Kings of Tarshish and of the isles send back a present. Kings of Sheba and Seba a reward bring near.read more.
And all kings do bow themselves to him, All nations do serve him,

And a wolf hath sojourned with a lamb, And a leopard with a kid doth lie down, And calf, and young lion, and fatling are together, And a little youth is leader over them. And cow and bear do feed, Together lie down their young ones, And a lion as an ox eateth straw. And played hath a suckling by the hole of an asp, And on the den of a cockatrice Hath the weaned one put his hand.read more.
Evil they do not, nor destroy in all My holy mountain, For full hath been the earth with the knowledge of Jehovah, As the waters are covering the sea.

Wolf and lamb do feed as one, And a lion as an ox eateth straw, As to the serpent -- dust is its food, They do no evil, nor destroy, In all My holy mountain, said Jehovah!

Lo, days are coming -- an affirmation of Jehovah, And come nigh hath the ploughman to the reaper, And the treader of grapes to the scatterer of seed, And the mountains have dropped juice, And all the hills do melt. And I have turned back to the captivity of My people Israel, And they have built desolate cities, and inhabited, And have planted vineyards, and drunk their wine, And made gardens, and eaten their fruit. And I have planted them on their own ground, And they are not plucked up any more from off their own ground, That I have given to them, said Jehovah thy God!

Psalm 72:3
Verse Concepts
Blessings From The MountainsHills
Peace, Promised To

The mountains bear peace to the people, And the heights by righteousness.

In that day is the Shoot of Jehovah for desire and for honour, And the fruit of the earth For excellence and for beauty to the escaped of Israel.

And it hath come to pass, in that day, Drop down do the mountains juice, And the hills do flow with milk, And all streams of Judah do go with water, And a fountain from the house of Jehovah goeth forth, And hath watered the valley of Shittim.

Jeremiah 3:18
Verse Concepts
reunitingReturn From The North
Fellowship, In The GospelNorth

In that day -- an affirmation of Jehovah, I do gather the halting one, And the driven away one I bring together, And she whom I have afflicted. And I have set the halting for a remnant, And the far-off for a mighty nation, And reigned hath Jehovah over them in mount Zion, From henceforth, and unto the age. And thou, O tower of Eder, Fort of the daughter of Zion, unto thee it cometh, Yea, come in hath the former rule, The kingdom to the daughter of Jerusalem.

Arise, be bright, for come hath thy light, And the honour of Jehovah hath risen on thee. For, lo, the darkness doth cover the earth, And thick darkness the peoples, And on thee rise doth Jehovah, And His honour on thee is seen. And come have nations to thy light, And kings to the brightness of thy rising.

And Jehovah from Zion doth roar, And from Jerusalem giveth forth His voice, And shaken have the heavens and earth, And Jehovah is a refuge to his people, And a stronghold to sons of Israel. And ye have known that I am Jehovah your God, Dwelling in Zion, My holy mountain, And Jerusalem hath been holy, And strangers do not pass over into it again.

In that day I raise the tabernacle of David, that is fallen, And I have repaired their breaches, And its ruins I do raise up, And I have built it up as in days of old.

They, therefore, indeed, having come together, were questioning him, saying, 'Lord, dost thou at this time restore the reign to Israel?'