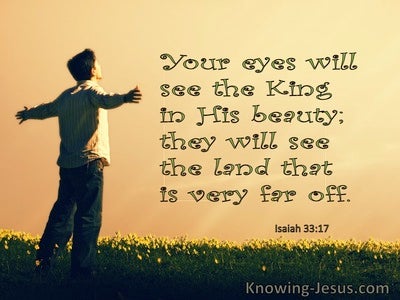 The grace is false, and the beauty is vain, A woman fearing Jehovah, she may boast herself.

and a woman, if she have long hair, a glory it is to her, because the hair instead of a covering hath been given to her;

and the eyes of Leah are tender, and Rachel hath been fair of form and fair of appearance.

Strength and honour are her clothing, And she rejoiceth at a latter day.

Dark am I, and comely, daughters of Jerusalem, As tents of Kedar, as curtains of Solomon.

and it cometh to pass as he hath drawn near to enter Egypt, that he saith unto Sarai his wife, 'Lo, I pray thee, I have known that thou art a woman of beautiful appearance;

A woman of worth who doth find? Yea, far above rubies is her price.

and hast seen in the captivity a woman of fair form, and hast delighted in her, and hast taken to thee for a wife,

And the king doth desire thy beauty, Because he is thy lord -- bow thyself to him,

In that day faint do the fair virgins, And the young men, with thirst.

for as the woman is of the man, so also the man is through the woman, and the all things are of God.

because of this the woman ought to have a token of authority upon the head, because of the messengers;

And there have not been found women fair as the daughters of Job in all the land, and their father doth give to them an inheritance in the midst of their brethren.

for thus once also the holy women who did hope on God, were adorning themselves, being subject to their own husbands,

And go forth doth thy name among nations, Because of thy beauty -- for it is complete, In My honour that I have set upon thee, An affirmation of the Lord Jehovah.

and it cometh to pass, at evening-time, that David riseth from off his couch, and walketh up and down on the roof of the king's house, and seeth from the roof a woman bathing, and the woman is of very good appearance,

whose adorning -- let it not be that which is outward, of plaiting of hair, and of putting around of things of gold, or of putting on of garments,

To preserve thee from an evil woman, From the flattery of the tongue of a strange woman.

A ring of gold in the nose of a sow -- A fair woman and stubborn of behaviour.

The Lord also hath scabbed The crown of the head of daughters of Zion, And Jehovah their simplicity exposeth.

The comely and the delicate one I have cut off, The daughter of Zion.

Many are the daughters who have done worthily, Thou hast gone up above them all.'

And like Absalom there was no man so fair in all Israel, to praise greatly; from the sole of his foot even unto his crown there was no blemish in him;

but -- the hidden man of the heart, in the incorruptible thing of the meek and quiet spirit, which is, before God, of great price,

For what His goodness! and what His beauty! Corn the young men, And new wine the virgins -- make fruitful!

In that day is the Shoot of Jehovah for desire and for honour, And the fruit of the earth For excellence and for beauty to the escaped of Israel.

and the young person is of very good appearance, a virgin, and a man hath not known her; and she goeth down to the fountain, and filleth her pitcher, and cometh up.

And there are born to Absalom three sons, and one daughter, and her name is Tamar; she was a woman of a fair appearance.

and they had hair as hair of women, and their teeth were as those of lions,

A king in his beauty, see do thine eyes, They see a land afar off.

Daughters of kings are among thy precious ones, A queen hath stood at thy right hand, In pure gold of Ophir.

and the woman conceiveth, and beareth a son, and she seeth him that he is fair, and she hideth him three months,

Matthew 26:10
Verse Concepts
Do Not HinderCommendation
Christ Knowing About People

And Jesus having known, said to them, 'Why do ye give trouble to the woman? for a good work she wrought for me;

Man, born of woman! Of few days, and full of trouble!