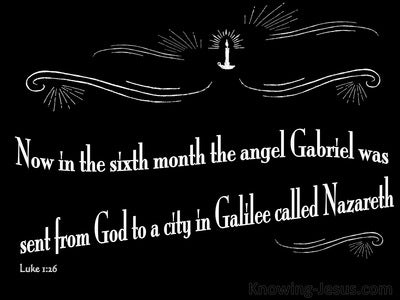 Now in the sixth month the angel Gabriel was sent from God to a city in Galilee called Nazareth,

and came and lived in a city called Nazareth. This was to fulfill what was spoken through the prophets: “He shall be called a Nazarene.”

Mark 1:24
Verse Concepts
Said To Be The ChristNames And Titles For ChristJesus Christ, Holiness OfDestruction Of Satan's Works
ExorcismsWhat Have We In Common?God, Unity OfNazareth

saying, “What business do we have with each other, Jesus of Nazareth? Have You come to destroy us? I know who You are—the Holy One of God!”

But when he heard that Archelaus was reigning over Judea in place of his father Herod, he was afraid to go there. Then after being warned by God in a dream, he left for the regions of Galilee, and came and lived in a city called Nazareth This was to fulfill what was spoken through the prophets: "He shall be called a Nazarene."

Matthew 21:11
Verse Concepts
Prophecy, In NtMessianic Titles, The ProphetCrowds Around Jesus
Jesus The ProphetWho He Might Be

And the crowds were saying, “This is

And He said to them, And they said to Him, “The things about

Mark 1:24
Verse Concepts
Said To Be The ChristNames And Titles For ChristJesus Christ, Holiness OfDestruction Of Satan's Works
ExorcismsWhat Have We In Common?God, Unity OfNazareth

They told him that Jesus of Nazareth was passing by.

When he heard that it was Jesus the

Nazareth » Joseph and mary live at

Joseph also went up from Galilee, from the city of Nazareth, to Judea, to the city of David which is called Bethlehem, because

Now in the sixth month the angel Gabriel was sent from God to a city in Galilee called Nazareth, to a virgin engaged to a man whose name was Joseph, of the descendants of David; and the virgin's name was Mary.

And He went down with them and came to

and came and lived in a city called

Luke 2:39
Verse Concepts
According To Things
Fulfilling The Law

When they had performed everything according to the Law of the Lord, they returned to Galilee, to

And He came to Nazareth, where He had been brought up; and as was His custom, He entered the synagogue on the Sabbath, and stood up to read. And the book of the prophet Isaiah was handed to Him. And He opened the book and found the place where it was written, "THE SPIRIT OF THE LORD IS UPON ME, BECAUSE HE ANOINTED ME TO PREACH THE GOSPEL TO THE POOR. HE HAS SENT ME TO PROCLAIM RELEASE TO THE CAPTIVES, AND RECOVERY OF SIGHT TO THE BLIND, TO SET FREE THOSE WHO ARE OPPRESSED, read more.
TO PROCLAIM THE FAVORABLE YEAR OF THE LORD." And He closed the book, gave it back to the attendant and sat down; and the eyes of all in the synagogue were fixed on Him. And He began to say to them, "Today this Scripture has been fulfilled in your hearing." And all were speaking well of Him, and wondering at the gracious words which were falling from His lips; and they were saying, "Is this not Joseph's son?" And He said to them, "No doubt you will quote this proverb to Me, 'Physician, heal yourself! Whatever we heard was done at Capernaum, do here in your hometown as well.'" And He said, "Truly I say to you, no prophet is welcome in his hometown. "But I say to you in truth, there were many widows in Israel in the days of Elijah, when the sky was shut up for three years and six months, when a great famine came over all the land; and yet Elijah was sent to none of them, but only to Zarephath, in the land of Sidon, to a woman who was a widow. "And there were many lepers in Israel in the time of Elisha the prophet; and none of them was cleansed, but only Naaman the Syrian." And all the people in the synagogue were filled with rage as they heard these things; and they got up and drove Him out of the city, and led Him to the brow of the hill on which their city had been built, in order to throw Him down the cliff. But passing through their midst, He went His way.

Nathanael said to him, “