17 Bible Verses about Not Understanding Sayings 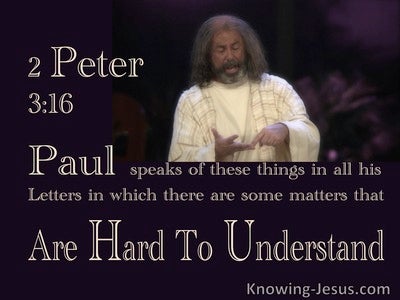 Jesus, perceiving it, said, "Why do you reason among yourselves, you of little faith, 'because you have brought no bread?' Don't you yet perceive, neither remember the five loaves for the five thousand, and how many baskets you took up? Nor the seven loaves for the four thousand, and how many baskets you took up?read more.
How is it that you don't perceive that I didn't speak to you concerning bread? But beware of the yeast of the Pharisees and Sadducees."

Mark 9:32
Verse Concepts
Fools, In Teaching Of Jesus ChristFear, Of Unknown
Not Asking Others

But they didn't understand the saying, and were afraid to ask him.

But they didn't understand this saying. It was concealed from them, that they should not perceive it, and they were afraid to ask him about this saying.

They understood none of these things. This saying was hidden from them, and they didn't understand the things that were said.

His disciples didn't understand these things at first, but when Jesus was glorified, then they remembered that these things were written about him, and that they had done these things to him.

John 20:9
Verse Concepts
Use Of The ScripturesChrist Would Rise
lungsNecessity

For as yet they didn't know the Scripture, that he must rise from the dead.

When anyone hears the word of the Kingdom, and doesn't understand it, the evil one comes, and snatches away that which has been sown in his heart. This is what was sown by the roadside.

as also in all of his letters, speaking in them of these things. In those, there are some things that are hard to understand, which the ignorant and unsettled twist, as they also do to the other Scriptures, to their own destruction.

I heard, but I didn't understand: then I said, my lord, what shall be the issue of these things?

How is it that you don't perceive that I didn't speak to you concerning bread? But beware of the yeast of the Pharisees and Sadducees."

They didn't understand that he spoke to them about the Father.

Now Jesus had spoken of his death, but they thought that he spoke of taking rest in sleep.

"Those who were with me indeed saw the light and were afraid, but they didn't understand the voice of him who spoke to me.

Otherwise if you bless with the spirit, how will he who fills the place of the unlearned say the "Amen" at your giving of thanks, seeing he doesn't know what you say?

Jesus spoke this parable to them, but they didn't understand what he was telling them.

They didn't understand the saying which he spoke to them.

Why don't you understand my speech? Because you can't hear my word.