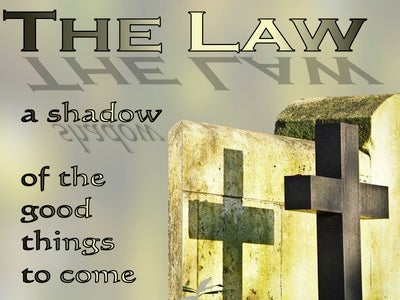 For every high priest selected from among men is appointed to officiate on their behalf in matters relating to God, that is, to offer gifts and sacrifices for sins.

For that reason he is obligated to offer sacrifices for his own sins as well as for those of the people.

For the Law, being only a reflection of the blessings to come and not their substance, can never make perfect those who come near by the same sacrifices repeatedly offered year after year.

Look at the Israelis from a human point of view. Those who eat the sacrifices share in what is on the altar, don't they?

Again you say, "Whoever swears an oath by the altar is excused, but whoever swears by the gift that is on it must keep his oath.'

You blind men! Which is more important, the gift or the altar that makes the gift holy?

But you say, "If anyone tells his father or mother, "Whatever support you might have received from me is Corban,"' (that is, an offering to God)

Because there weren't enough priests, they were unable to prepare all the burnt offerings until other priests came forward after having consecrated themselves, so their descendant of Levi relatives assisted them until the services were complete. (The descendants of Levi had been more conscientious in consecrating themselves than had been the priests.)

They slaughtered the Passover lamb, and the priests poured out the blood that they had received from the lambs while the descendants of Levi flayed the sacrifices.

Vows » Were made in reference to » Offering sacrifices

You are not to bring to the LORD an offering that is blind, fractured, mutilated, or infected with ulcers, scurvy, or scales. You are not to present any of them as an offering made by fire on the altar for the LORD.

"If his sacrifice accompanies a fulfilled vow or is a voluntary offering, it is to be eaten on the day the offeror brings the sacrifice. Anything left over is to be eaten the next day,

"Tell Aaron, his sons, and all the Israelis that when a person from the house of Israel or from the resident aliens living in Israel brings his offering to the LORD as a whole burnt offering (whether in fulfillment of a promise or a free will offerings),