24 Bible Verses about Parables Of The Kingdom 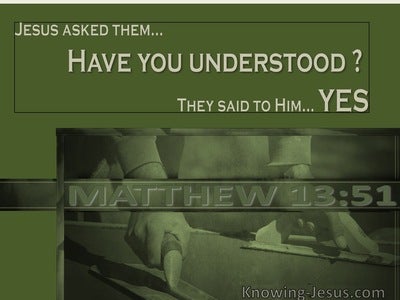 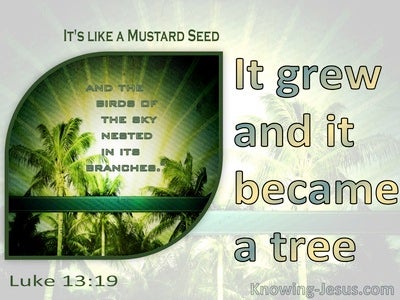 And He said, “How shall we picture the kingdom of God, or by what parable shall we present it?

So He was saying, “What is the kingdom of God like, and to what shall I compare it?

And again He said, “To what shall I compare the kingdom of God?

When anyone hears the word of the kingdom and does not understand it, the evil one comes and snatches away what has been sown in his heart. This is the one on whom seed was sown beside the road.

And He was saying, “The kingdom of God is like a man who casts seed upon the soil;

He presented another parable to them, saying, “The kingdom of heaven is like a mustard seed, which a man took and sowed in his field;

So He was saying, “What is the kingdom of God like, and to what shall I compare it? It is like a mustard seed, which a man took and threw into his own garden; and it grew and became a tree, and the birds of the air nested in its branches.”

“For this reason the kingdom of heaven may be compared to a king who wished to settle accounts with his slaves.

“For the kingdom of heaven is like a landowner who went out early in the morning to hire laborers for his vineyard.

“The kingdom of heaven may be compared to a king who gave a wedding feast for his son.

“Then the kingdom of heaven will be comparable to ten virgins, who took their lamps and went out to meet the bridegroom.

“Again, the kingdom of heaven is like a merchant seeking fine pearls,

“Again, the kingdom of heaven is like a dragnet cast into the sea, and gathering fish of every kind;

And He was saying, “The kingdom of God is like a man who casts seed upon the soil; and he goes to bed at night and gets up by day, and the seed sprouts and grows—how, he himself does not know. The soil produces crops by itself; first the blade, then the head, then the mature grain in the head.read more.
But when the crop permits, he immediately puts in the sickle, because the harvest has come.”

And He said, “How shall we picture the kingdom of God, or by what parable shall we present it? It is like a mustard seed, which, when sown upon the soil, though it is smaller than all the seeds that are upon the soil, yet when it is sown, it grows up and becomes larger than all the garden plants and forms large branches; so that the birds of the air can nest under its shade.”read more.
With many such parables He was speaking the word to them, so far as they were able to hear it; and He did not speak to them without a parable; but He was explaining everything privately to His own disciples.

“Again, the kingdom of heaven is like a dragnet cast into the sea, and gathering fish of every kind; and when it was filled, they drew it up on the beach; and they sat down and gathered the good fish into containers, but the bad they threw away. So it will be at the end of the age; the angels will come forth and take out the wicked from among the righteous,read more.
and will throw them into the furnace of fire; in that place there will be weeping and gnashing of teeth. “Have you understood all these things?” They *said to Him, “Yes.” And Jesus said to them, “Therefore every scribe who has become a disciple of the kingdom of heaven is like a head of a household, who brings out of his treasure things new and old.”

“Then the kingdom of heaven will be comparable to ten virgins, who took their lamps and went out to meet the bridegroom. Five of them were foolish, and five were prudent. For when the foolish took their lamps, they took no oil with them,read more.
but the prudent took oil in flasks along with their lamps. Now while the bridegroom was delaying, they all got drowsy and began to sleep. But at midnight there was a shout, ‘Behold, the bridegroom! Come out to meet him.’ Then all those virgins rose and trimmed their lamps. The foolish said to the prudent, ‘Give us some of your oil, for our lamps are going out.’ But the prudent answered, ‘No, there will not be enough for us and you too; go instead to the dealers and buy some for yourselves.’ And while they were going away to make the purchase, the bridegroom came, and those who were ready went in with him to the wedding feast; and the door was shut. Later the other virgins also came, saying, ‘Lord, lord, open up for us.’ But he answered, ‘Truly I say to you, I do not know you.’ Be on the alert then, for you do not know the day nor the hour.

Jesus presented another parable to them, saying, “The kingdom of heaven may be compared to a man who sowed good seed in his field. But while his men were sleeping, his enemy came and sowed tares among the wheat, and went away. But when the wheat sprouted and bore grain, then the tares became evident also.read more.
The slaves of the landowner came and said to him, ‘Sir, did you not sow good seed in your field? How then does it have tares?’ And he said to them, ‘An enemy has done this!’ The slaves *said to him, ‘Do you want us, then, to go and gather them up?’ But he *said, ‘No; for while you are gathering up the tares, you may uproot the wheat with them. Allow both to grow together until the harvest; and in the time of the harvest I will say to the reapers, “First gather up the tares and bind them in bundles to burn them up; but gather the wheat into my barn.”’”

“For the kingdom of heaven is like a landowner who went out early in the morning to hire laborers for his vineyard. When he had agreed with the laborers for a denarius for the day, he sent them into his vineyard. And he went out about the third hour and saw others standing idle in the market place;read more.
and to those he said, ‘You also go into the vineyard, and whatever is right I will give you.’ And so they went. Again he went out about the sixth and the ninth hour, and did the same thing. And about the eleventh hour he went out and found others standing around; and he *said to them, ‘Why have you been standing here idle all day long?’ They *said to him, ‘Because no one hired us.’ He *said to them, ‘You go into the vineyard too.’ “When evening came, the owner of the vineyard *said to his foreman, ‘Call the laborers and pay them their wages, beginning with the last group to the first.’ When those hired about the eleventh hour came, each one received a denarius. When those hired first came, they thought that they would receive more; but each of them also received a denarius. When they received it, they grumbled at the landowner, saying, ‘These last men have worked only one hour, and you have made them equal to us who have borne the burden and the scorching heat of the day.’ But he answered and said to one of them, ‘Friend, I am doing you no wrong; did you not agree with me for a denarius? Take what is yours and go, but I wish to give to this last man the same as to you. Is it not lawful for me to do what I wish with what is my own? Or is your eye envious because I am generous?’ So the last shall be first, and the first last.”

Topics on Parables Of The Kingdom

Parables Of The Kingdom Of Heaven

And He was saying,