18 Bible Verses about Rebellion Against God, Shown In 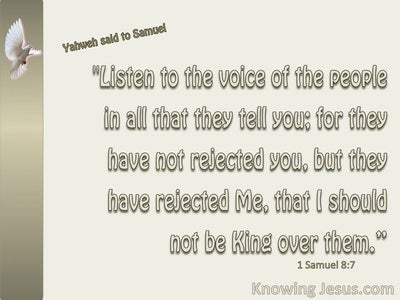 Likewise when the LORD sent you from Kadeshbarnea, saying, Go up and possess the land which I have given you; then you rebelled against the commandment of the LORD your God, and you believed him not, nor hearkened to his voice.

Yea, they despised the pleasant land, they believed not his word: But murmured in their tents, and hearkened not unto the voice of the LORD.

And the LORD said unto Samuel, Hearken unto the voice of the people in all that they say unto you: for they have not rejected you, but they have rejected me, that I should not reign over them.

Isaiah 1:5
Verse Concepts
Other References To The HeartPersistence
Sinful HeartsHeart, Fallen And Redeemed

Why should you be stricken any more? you will revolt more and more: the whole head is sick, and the whole heart faint.

Turn unto him from whom the children of Israel have deeply revolted.

Nevertheless they were disobedient, and rebelled against you, and cast your law behind their backs, and slew your prophets who testified against them to turn them to you, and they worked great provocations.

Because they rebelled against the words of God, and the counsel of the most High:

But he rebelled against him in sending his ambassadors into Egypt, that they might give him horses and many people. Shall he prosper? shall he escape that does such things? or shall he break the covenant, and be delivered?

And the people contended with Moses, and spoke, saying, Would God that we had died when our brethren died before the LORD!

But they rebelled against me, and would not hearken unto me: they did not every man cast away the abominations of their eyes, neither did they forsake the idols of Egypt: then I said, I will pour out my fury upon them, to accomplish my anger against them in the midst of the land of Egypt.

But they refused to hearken, and shrugged the shoulder, and stopped their ears, that they should not hear.

In transgressing and lying against the LORD, and departing away from our God, speaking oppression and revolt, conceiving and uttering from the heart words of falsehood.

Whosoever he be that does rebel against your commandment, and will not hearken unto your words in all that you command him, he shall be put to death: only be strong and of a good courage.

We have sinned, and have committed iniquity, and have done wickedly, and have rebelled, even by departing from your precepts and from your judgments:

They have turned aside quickly out of the way which I commanded them: they have made them a molten calf, and have worshiped it, and have sacrificed to it, and said, These are your gods, O Israel, who have brought you up out of the land of Egypt. And the LORD said unto Moses, I have seen this people, and, behold, it is a stiff-necked people:

Job 24:13
Verse Concepts
Paths Of The WickedBeing A Light
Character Of WickedPurgatory

They are of those that rebel against the light; they know not its ways, nor abide in its paths.

I have spread out my hands all the day unto a rebellious people, who walk in a way that was not good, after their own thoughts;