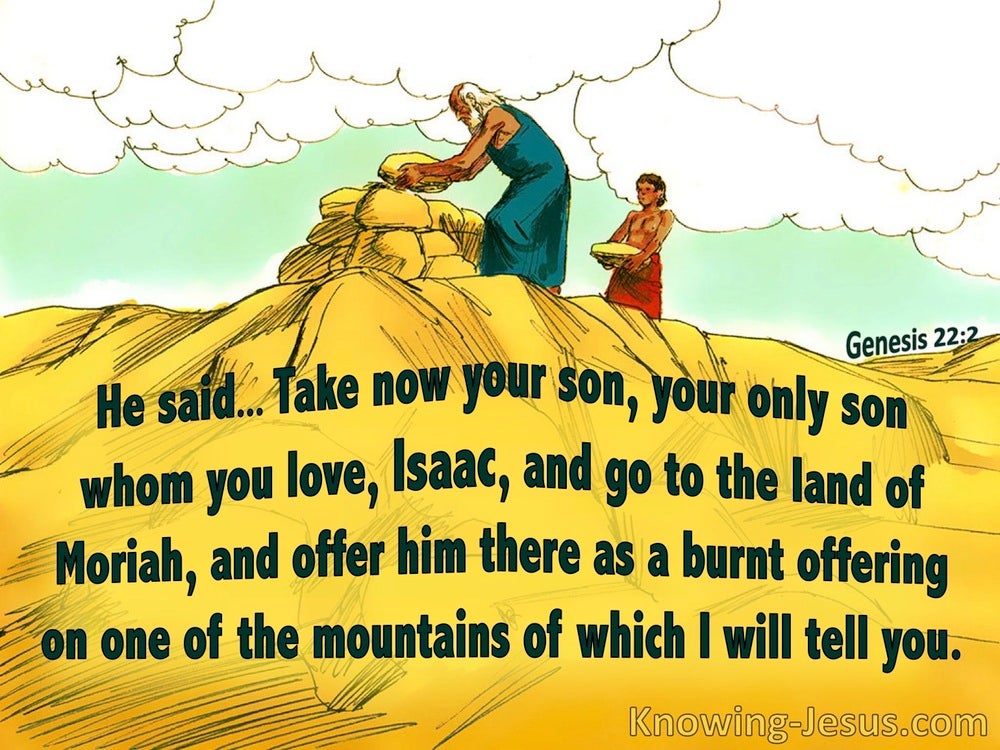 Now Abraham arose early in the morning and went to the place where he had stood before the Lord;

He said, “Take now your son, your only son, whom you love, Isaac, and go to the land of Moriah, and offer him there as a burnt offering on one of the mountains of which I will tell you.” So Abraham rose early in the morning and saddled his donkey, and took two of his young men with him and Isaac his son; and he split wood for the burnt offering, and arose and went to the place of which God had told him.

So Jacob rose early in the morning, and took the stone that he had put under his head and set it up as a pillar and poured oil on its top. He called the name of that place Bethel; however, previously the name of the city had been Luz. Then Jacob made a vow, saying, “If God will be with me and will keep me on this journey that I take, and will give me food to eat and garments to wear,read more.
and I return to my father’s house in safety, then the Lord will be my God. This stone, which I have set up as a pillar, will be God’s house, and of all that You give me I will surely give a tenth to You.”

So he cut out two stone tablets like the former ones, and Moses rose up early in the morning and went up to Mount Sinai, as the Lord had commanded him, and he took two stone tablets in his hand. The Lord descended in the cloud and stood there with him as he called upon the name of the Lord.

Then they arose early in the morning and worshiped before the Lord, and returned again to their house in Ramah. And Elkanah had relations with Hannah his wife, and the Lord remembered her. It came about in due time, after Hannah had conceived, that she gave birth to a son; and she named him Samuel, saying, “Because I have asked him of the Lord.” Then the man Elkanah went up with all his household to offer to the Lord the yearly sacrifice and pay his vow.read more.
But Hannah did not go up, for she said to her husband, “I will not go up until the child is weaned; then I will bring him, that he may appear before the Lord and stay there forever.” Elkanah her husband said to her, “Do what seems best to you. Remain until you have weaned him; only may the Lord confirm His word.” So the woman remained and nursed her son until she weaned him. Now when she had weaned him, she took him up with her, with a three-year-old bull and one ephah of flour and a jug of wine, and brought him to the house of the Lord in Shiloh, although the child was young. Then they slaughtered the bull, and brought the boy to Eli. She said, “Oh, my lord! As your soul lives, my lord, I am the woman who stood here beside you, praying to the Lord. For this boy I prayed, and the Lord has given me my petition which I asked of Him. So I have also dedicated him to the Lord; as long as he lives he is dedicated to the Lord.” And he worshiped the Lord there.

When the days of feasting had completed their cycle, Job would send and consecrate them, rising up early in the morning and offering burnt offerings according to the number of them all; for Job said, “Perhaps my sons have sinned and cursed God in their hearts.” Thus Job did continually.

In the early morning, while it was still dark, Jesus got up, left the house, and went away to a secluded place, and was praying there.

Early in the morning He came again into the temple, and all the people were coming to Him; and He sat down and began to teach them.

And all the people would get up early in the morning to come to Him in the temple to listen to Him.

Now Joshua rose early in the morning and mustered the people, and he went up with the elders of Israel before the people to Ai.

Samuel rose early in the morning to meet Saul; and it was told Samuel, saying, “Saul came to Carmel, and behold, he set up a monument for himself, then turned and proceeded on down to Gilgal.”

So David arose early in the morning and left the flock with a keeper and took the supplies and went as Jesse had commanded him. And he came to the circle of the camp while the army was going out in battle array shouting the war cry.

Woe to those who rise early in the morning that they may pursue strong drink,
Who stay up late in the evening that wine may inflame them!

When the Sabbath was over, Mary Magdalene, and Mary the mother of James, and Salome, bought spices, so that they might come and anoint Him. Very early on the first day of the week, they *came to the tomb when the sun had risen.