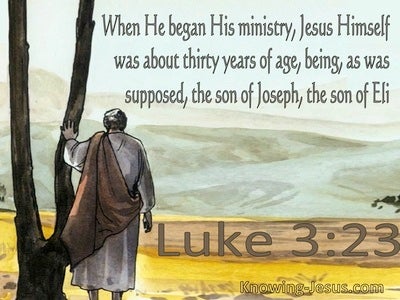 And, Jesus himself, was, when he began, about thirty years of age, being the son, as was supposed - of Joseph, of Heli:

Now, Joseph, was thirty years old, when he took his station, before Pharaoh king of Egypt. So Joseph went forth from before Pharaoh, and passed along through all the land of Egypt.

Saul was thirty years old when he began to reign; and, when he had reigned two years over Israel,

Thirty years old, was David when he began to reign, - forty years, he reigned:

And it came to pass in the thirtieth year, in the fourth mouth on the fifth day of the month I being in the midst of them of the captivity, by the river Chebar, that the heavens were opened, and I saw visions of God.

Now the Levites were numbered, from thirty years old and upwards, - and their number by their polls, of mature men, was thirty-eight thousand.

He was the most honourable, of thirty, although, unto the three, he attained no, - so David added him to his council.

Among the thirty, lo! honourable, was he, but, unto the first three, did he not attain, - howbeit David set him over his council.

Asahel, brother of Joab, was among the thirty, - Elhanan, son of Dodo, of Bethlehem;

The same Benaiah, was a hero of thirty, and over the thirty, - and, over his course, was Ammizabad his son.

and said - What are ye willing to give unto me? and, I, unto you, will deliver him up. And they appointed him thirty pieces of silver.

Then said I unto them, If it be good in your eyes, give me my wage, and, if not, forbear. So they weighed out my wage, thirty pieces of silver. Then said Yahweh unto me, Cast it into the treasury, the magnificent price at which I had been valued by them! So I took the thirty pieces of silver, and cast them, in the house of Yahweh, into the treasury.

And he said Let it not, I pray thee, be vexing to My Lord, but let me speak, Peradventure there may be found there - thirty And be said, I will not to it, if I find there - thirty.

And Samuel took Saul and his young man, and brought them into the guest-chamber, - and gave them a place at the head of them who were bidden, they being about thirty persons.

Then the king commanded Ebed-melech the Ethiopian saying, - Take with thee from hence thirty men, and lift Jeremiah the prophet out of the dungeon before he die.

Judges 10:4
Verse Concepts
Given Names To This DayMultitudes Of Donkeys
Back

Now he had thirty sons, that rode on thirty ass colts, and they had, thirty cities, - they are called Havvoth-jair, until this day, which are in the land of Gilead.

And so it was, he had forty sons and thirty grandsons, who rode on seventy ass colts, - and he judged Israel eight years.

And it came to pass, because they feared him, that they took thirty companions, who remained with him.

And the Spirit of Yahweh, came suddenly over him, and he went down to Ashkelon, and smote of them thirty men, and took their garments, and gave the changes of raiment to them who had told the riddle, - and his anger was kindled, and he went up to his father's house.

Judges 20:31
Verse Concepts
Killing Within Israel
Bringing People Out Of Other Places

And the sons of Benjamin came forth against the people, they were drawn away from the city, - and began to smite of the people, slaying as time after time, in the highways, whereof, one, goeth up to Bethel, and, the other, to Gibeah in the field, about thirty men in Israel.

So, when the men of Israel turned in the battle, - and, the Benjamites, began to smite and slay of the sons of Israel, about thirty men, for they said, Yea! they are, smitten, before us, as in the first battle,

And, this, is the number of the heroes who pertained to David, - Jashobeam son of a Hachmonite, chief of the thirty, the same, brandished his spear over three hundred - slain at one time.

And three of the thirty chiefs went down upon the rock, unto David, into the cave of Adullam, - a host of Philistines, being encamped in the vale of Rephaim.

And, Abishai brother of Joab - he, was the chief of three, he, having brandished his spear against three hundred - who were slain, - and so, he, had a name among three.

And Samson said unto them, I pray you let me put you forth a riddle, - if ye, tell, it me, within the seven days of the banquet, and find it out, then will I give you thirty linen wraps and thirty changes of raiment;

but, if ye cannot tell me, then shall, ye, give me thirty linen wraps, and thirty changes of raiment. And they said unto him, Put forth thy riddle, that we may hear it.

And, these, were the numbers of them, - basins of gold, thirty, basins of silver, a thousand, knives, twenty-nine;

bowls of gold, thirty, bowls of silver, of a secondary sort, four hundred and ten, - other utensils, a thousand.

Have I not written for thee noble things, with counsels and knowledge:

Then he brought me into the outer court, and lo! chambers and a tesselated pavement, made to the court round about on every side, - thirty chambers against the pavement,

But, some, fell upon the good ground, and did yield fruit, - this, indeed a hundred fold, and, that, sixty, and, the other, thirty.

But, he on the good ground sown, the same, is he who doth hear and understand the word, who, indeed, beareth fruit and produceth, - this, a hundred, and, that, sixty, and, the other, thirty.

And, other, fell into the good ground, and was yielding fruit, coming up and growing, - and was bearing, thirtyfold and sixtyfold and a hundredfold,

And those yonder are they who on the good ground are sown, - who, indeed, hear the word, and accept it, and bear fruit - thirtyfold and sixtyfold and a hundredfold.

And three of the thirty chiefs descended, and came in, towards harvest, unto David, unto the cave of Adullam, - although, a troop of Philistines, were encamped in the vale of Rephaim;

And he strengthened the fortified places, - and put therein captains, and stores of food, and oil and wine;

and appointed for himself priests for the high places, and for the demons - and for the calves which he had made.

And, after her, he took Maacah, daughter of Absolom, - and she bare him Abijah, and Attai, and Ziza, and Shelomith.

So Jotham strengthened himself, - for he fixed his ways before Yahweh his God.

The king of Tirzah, one, - All the kings, thirty and one.

Thirty Thousand And Up

And, the Philistines, gathered themselves together to fight with Israel, thirty thousand chariots, and six thousand horsemen, a people also like the sand that is on the sea-shore for multitude, - and they came up, and encamped in Michmash, east of Beth-aven.