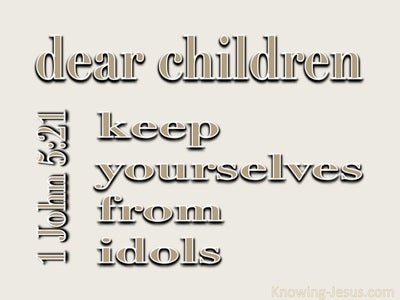 And him who is weak in the faith receive ye -- not to determinations of reasonings;

But victuals do not commend us to God, for neither if we may eat are we in advance; nor if we may not eat, are we behind; but see, lest this privilege of yours may become a stumbling-block to the infirm, for if any one may see thee that hast knowledge in an idol's temple reclining at meat -- shall not his conscience -- he being infirm -- be emboldened to eat the things sacrificed to idols,read more.
and the brother who is infirm shall perish by thy knowledge, because of whom Christ died? and thus sinning in regard to the brethren, and smiting their weak conscience -- in regard to Christ ye sin; wherefore, if victuals cause my brother to stumble, I may eat no flesh -- to the age -- that my brother I may not cause to stumble.

Then were brought near to him children that he might put hands on them and pray, and the disciples rebuked them. But Jesus said, 'Suffer the children, and forbid them not, to come unto me, for of such is the reign of the heavens;'

And they were bringing to him children, that he might touch them, and the disciples were rebuking those bringing them, and Jesus having seen, was much displeased, and he said to them, 'Suffer the children to come unto me, and forbid them not, for of such is the reign of God;

And they were bringing near also the babes, that he may touch them, and the disciples having seen did rebuke them, and Jesus having called them near, said, 'Suffer the little children to come unto me, and forbid them not, for of such is the reign of God;

And he came to Capernaum, and being in the house, he was questioning them, 'What were ye reasoning in the way among yourselves?' and they were silent, for with one another they did reason in the way who is greater; and having sat down he called the twelve, and he saith to them, 'If any doth will to be first, he shall be last of all, and minister of all.'read more.
And having taken a child, he set him in the midst of them, and having taken him in his arms, said to them,

And there entered a reasoning among them, this, Who may be greater of them? and Jesus having seen the reasoning of their heart, having taken hold of a child, set him beside himself,

And John did answer him, saying, 'Teacher, we saw a certain one in thy name casting out demons, who doth not follow us, and we forbade him, because he doth not follow us.' And Jesus said, 'Forbid him not, for there is no one who shall do a mighty work in my name, and shall be able readily to speak evil of me: for he who is not against us is for us;

And John answering said, 'Master, we saw a certain one in thy name casting forth the demons, and we forbade him, because he doth not follow with us;' and Jesus said unto him, 'Forbid not, for he who is not against us, is for us.'

and the other out of love, having known that for defence of the good news I am set: what then? in every way, whether in pretence or in truth, Christ is proclaimed -- and in this I rejoice, yea, and shall rejoice.

Purer of eyes than to behold evil, To look on perverseness Thou art not able, Why dost Thou behold the treacherous? Thou keepest silent when the wicked Doth swallow the more righteous than he,

I have known thy works, and thy labour, and thy endurance, and that thou art not able to bear evil ones, and that thou hast tried those saying themselves to be apostles and are not, and hast found them liars,

and that because of the false brethren brought in unawares, who did come in privily to spy out our liberty that we have in Christ Jesus, that us they might bring under bondage,

And we ask you, brethren, in regard to the presence of our Lord Jesus Christ, and of our gathering together unto him, that ye be not quickly shaken in mind, nor be troubled, neither through spirit, neither through word, neither through letters as through us, as that the day of Christ hath arrived; let not any one deceive you in any manner, because -- if the falling away may not come first, and the man of sin be revealed -- the son of the destruction,

if any one be teaching otherwise, and do not consent to sound words -- those of our Lord Jesus Christ -- and to the teaching according to piety, he is proud, knowing nothing, but doting about questions and word-striving, out of which doth come envy, strife, evil-speakings, evil-surmisings, wranglings of men wholly corrupted in mind, and destitute of the truth, supposing the piety to be gain; depart from such;

for there shall be a season when the sound teaching they will not suffer, but according to their own desires to themselves they shall heap up teachers -- itching in the hearing, and indeed, from the truth the hearing they shall turn away, and to the fables they shall be turned aside.

And there did come also false prophets among the people, as also among you there shall be false teachers, who shall bring in besides destructive sects, and the Master who bought them denying, bringing to themselves quick destruction,

Whoredom is actually heard of among you, and such whoredom as is not even named among the nations -- as that one hath the wife of the father! -- and ye are having been puffed up, and did not rather mourn, that he may be removed out of the midst of you who did this work, for I indeed, as being absent as to the body, and present as to the spirit, have already judged, as being present, him who so wrought this thing:read more.
in the name of our Lord Jesus Christ -- ye being gathered together, also my spirit -- with the power of our Lord Jesus Christ, to deliver up such a one to the Adversary for the destruction of the flesh, that the spirit may be saved in the day of the Lord Jesus.

flee the whoredom; every sin -- whatever a man may commit -- is without the body, and he who is committing whoredom, against his own body doth sin. Have ye not known that your body is a sanctuary of the Holy Spirit in you, which ye have from God? and ye are not your own, for ye were bought with a price; glorify, then, God in your body and in your spirit, which are God's.

'But I have against thee a few things: That thou hast there those holding the teaching of Balaam, who did teach Balak to cast a stumbling-block before the sons of Israel, to eat idol-sacrifices, and to commit whoredom;

Neither become ye idolaters, as certain of them, as it hath been written, 'The people sat down to eat and to drink, and stood up to play;'

Little children, guard yourselves from the idols! Amen.