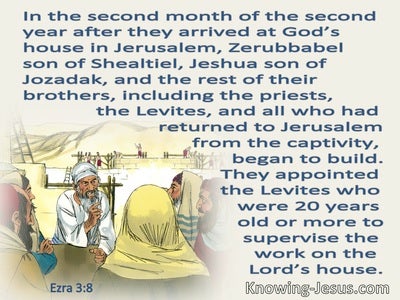 Everyone who is numbered, from twenty years old and over, shall give the contribution to the Lord.

a beka a head (that is, half a shekel according to the shekel of the sanctuary), for each one who passed over to those who were numbered, from twenty years old and upward, for 603,550 men.

from twenty years old and upward, whoever is able to go out to war in Israel, you and Aaron shall number them by their armies. With you, moreover, there shall be a man of each tribe, each one head of his father’s household. These then are the names of the men who shall stand with you: of Reuben, Elizur the son of Shedeur;read more.
of Simeon, Shelumiel the son of Zurishaddai; of Judah, Nahshon the son of Amminadab; of Issachar, Nethanel the son of Zuar; of Zebulun, Eliab the son of Helon; of the sons of Joseph: of Ephraim, Elishama the son of Ammihud; of Manasseh, Gamaliel the son of Pedahzur; of Benjamin, Abidan the son of Gideoni; of Dan, Ahiezer the son of Ammishaddai; of Asher, Pagiel the son of Ochran; of Gad, Eliasaph the son of Deuel; of Naphtali, Ahira the son of Enan. These are they who were called of the congregation, the leaders of their fathers’ tribes; they were the heads of divisions of Israel.” So Moses and Aaron took these men who had been designated by name, and they assembled all the congregation together on the first of the second month. Then they registered by ancestry in their families, by their fathers’ households, according to the number of names, from twenty years old and upward, head by head,

your corpses will fall in this wilderness, even all your numbered men, according to your complete number from twenty years old and upward, who have grumbled against Me.

“Take a census of all the congregation of the sons of Israel from twenty years old and upward, by their fathers’ households, whoever is able to go out to war in Israel.”

But David did not count those twenty years of age and under, because the Lord had said He would multiply Israel as the stars of heaven.

These were the sons of Levi according to their fathers’ households, even the heads of the fathers’ households of those of them who were counted, in the number of names by their census, doing the work for the service of the house of the Lord, from twenty years old and upward. For David said, “The Lord God of Israel has given rest to His people, and He dwells in Jerusalem forever. Also, the Levites will no longer need to carry the tabernacle and all its utensils for its service.”read more.
For by the last words of David the sons of Levi were numbered from twenty years old and upward.

as well as the priests who were enrolled genealogically according to their fathers’ households, and the Levites from twenty years old and upwards, by their duties and their divisions.

Now in the second year of their coming to the house of God at Jerusalem in the second month, Zerubbabel the son of Shealtiel and Jeshua the son of Jozadak and the rest of their brothers the priests and the Levites, and all who came from the captivity to Jerusalem, began the work and appointed the Levites from twenty years and older to oversee the work of the house of the Lord.

And he said, “Now behold, I have ventured to speak to the Lord; suppose twenty are found there?” And He said, “I will not destroy it on account of the twenty.”

That first slaughter which Jonathan and his armor bearer made was about twenty men within about half a furrow in an acre of land.

There were a thousand men of Benjamin with him, with Ziba the servant of the house of Saul, and his fifteen sons and his twenty servants with him; and they rushed to the Jordan before the king.

Then Abner and twenty men with him came to David at Hebron. And David made a feast for Abner and the men who were with him.

and Hashabiah and Jeshaiah of the sons of Merari, with his brothers and their sons, 20 men;

and for the second side of the tabernacle, on the north side, twenty boards,

Then for the second side of the tabernacle, on the north side, he made twenty boards,

and its pillars shall be twenty, with their twenty sockets of bronze; the hooks of the pillars and their bands shall be of silver.

Likewise for the north side in length there shall be hangings one hundred cubits long, and its twenty pillars with their twenty sockets of bronze; the hooks of the pillars and their bands shall be of silver.

He struck them with a very great slaughter from Aroer to the entrance of Minnith, twenty cities, and as far as Abel-keramim. So the sons of Ammon were subdued before the sons of Israel.

(Hiram king of Tyre had supplied Solomon with cedar and cypress timber and gold according to all his desire), then King Solomon gave Hiram twenty cities in the land of Galilee.

Now a man came from Baal-shalishah, and brought the man of God bread of the first fruits, twenty loaves of barley and fresh ears of grain in his sack. And he said, “Give them to the people that they may eat.”

But Abijah became powerful; and took fourteen wives to himself, and became the father of twenty-two sons and sixteen daughters.