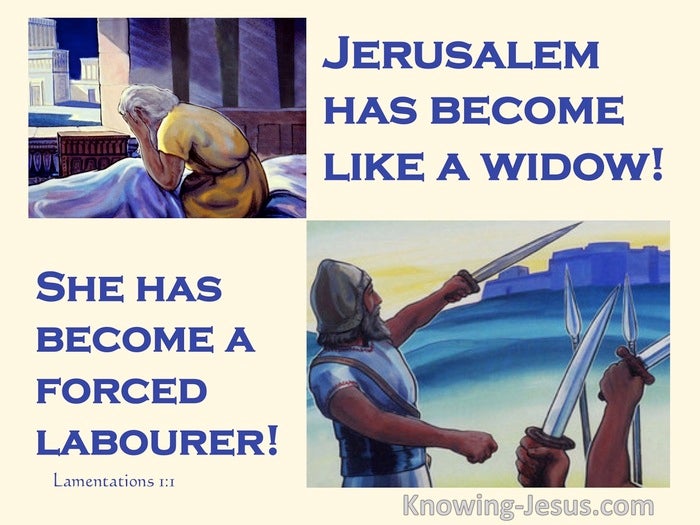 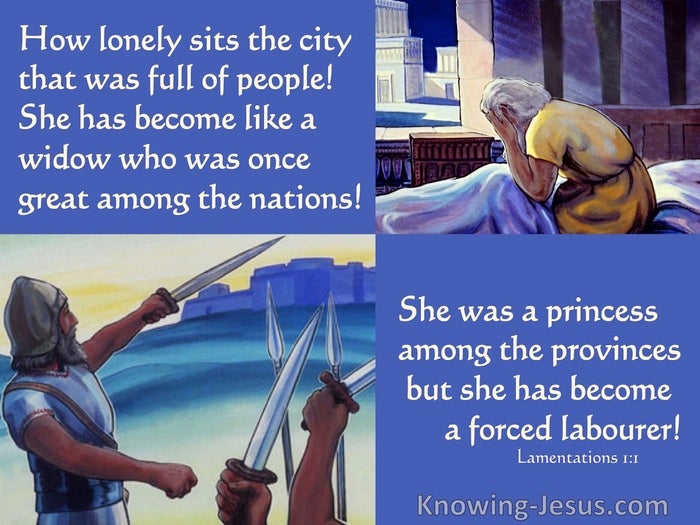 How sat the city alone being many in people she was as a widow: being many among the nations, being a leader in the provinces, she became for tribute.

How lonely she lies, the city that thronged with people! Like a widow she has become, this great one among nations! The princess among provinces has become a vassal.

How doth the city sit solitary, that was full of people! She is become as a widow, that was great among the nations! She that was a princess among the provinces is become tributary!

See her seated by herself, the town which was full of people! She who was great among the nations has become like a widow! She who was a princess among the countries has come under the yoke of forced work!

How doth the city sit solitary that was full of people! She that was great among the nations is become as a widow; the princess among the provinces is become tributary!

How desolate the city sits [that] was full of people! She has become like a widow, [once] great among the nations! Like a woman of nobility in the provinces, she has become a forced laborer.

{Aleph} Alas, how sitteth the city so desolate, that some time was full of people? How is she become like a widow, which was the lady of all nations? How is she brought under tribute, that ruled all lands?

(Alef)Alas! The city once full of people now sits all alone! The prominent lady among the nations has become a widow! The princess who once ruled the provinces has become a forced laborer!

How the city sits solitary, that was full of people. She has become as a widow, who was great among the nations. She who was a princess among the provinces has become a forced laborer.

How is seated alone, the city that abounded with people, hath become as a widow, - She who abounded among the nations was a princess among provinces, hath come under tribute.

How the city sits solitary, that was full of people! She has become as a widow, who was great among the nations! She who was a princess among the provinces is become tributary!

How hath she sat alone, The city abounding with people! She hath been as a widow, The mighty among nations! Princes among provinces, She hath become tributary!

Israel » A type of the apostate church when disobedient » Calamities of

Jerusalem » Described as » Princess among the provinces

Jews, the » Captivity of » Calamities of

Widow's » Illustrative of » Zion in captivity

how is she become as a widow
H490
אלמנה
'almanah
widow, desolate house, desolate palace
Usage: 54

Word Count of 19 Translations in Lamentations 1:1 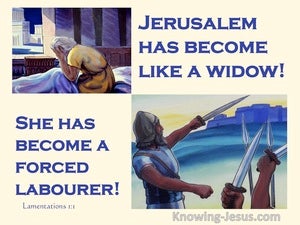 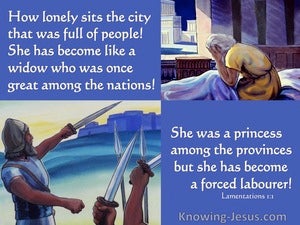 A prayer for Lamentations 1:1

1 How sat the city alone being many in people she was as a widow: being many among the nations, being a leader in the provinces, she became for tribute. 2 Weeping, she will weep in the night, and her tears upon her cheeks: no comfort to her from all loving her: all her friends dealt faithlessly with her, they were to her for enemies.

And Solomon was ruling over all kingdoms from the river to the land of the rovers, and even to the bound of Egypt: they were bringing a gift and serving Solomon all the days of his life.

And strong kings were over Jerusalem, and ruling over all beyond the river: and tribute, excise, and, toll, being given to them.

And her entrances sighed and mourned; and being clean, she shall sit upon the earth.

The city put in commotion was filled with noise, the exulting city: thy wounded not wounded of the sword, and not the dead of war.

The crown of our head fell: wo! now to us, for we sinned.

And saying, Woe, woe, the great city, surrounded with fine linen, and purple, and scarlet, and adorned with gold, and precious stones, and pearls! for in one hour was so great riches laid waste.

And Pharaoh-Necho will bind him in Riblah in the land of Hamath, in reigning in Jerusalem; and he will give a fine upon the land, a hundred talents of silver and a talent of gold.

And there are those saying, We borrowed silver for the king's tribute, our fields and our vineyards.

And its produce being much for the kings whom thou gavest over us in our sins: and ruling over our bodies and upon our cattle according to their will, and we in great straits.

There the tribes went up, the tribes of Jah, the testimonies to Israel, to confess to the name of Jehovah.

How thou fallest from the heavens, brilliant star, son of the morning! thou wert cut off to the earth, overthrowing upon the nations!

Come down and sit upon the dust, thou virgin daughter of Babel, sit upon the earth: no throne, thou daughter of the Chaldeans: for thou shalt not be added for them to call thee tender and delicate.

The Lord Jehovah opened to me the ear and I opposed not, and I drew not back.

And I gave Jerusalem for heaps and a dwelling of jackals; and the cities of Judah I will give a desolation from none inhabiting.

And Gedaliah son of Ahikam, son of Shaphan, will swear to them and to their men, saying, Ye shall not fear serving the Chaldeans: dwell in the land and serve the king of Babel, and it shall be well to you.

How was the hammer of all the earth cut off, and it will be broken! How was Babel for a desolation among the nations!

How will Jehovah in his anger cover the daughter of Zion! he cast down from the heavens to the earth the beauty of Israel, and he remembered not the footstool of his feet in the day of his anger.

They sat upon the earth; the old men of the daughter of Zion were silent; they brought up the dust upon their head: they girded on sackcloth: the virgins of Jerusalem brought down their head to the earth.

How will the gold become dim the good gold will be changed the stones of the holy place shall be poured out in the head of all the streets.

And all the princes of the sea shall come down from their thrones, and they removed their robes, and they shall put off the garments of their vanegations: they shall put on tremblings; they sat upon the earth and trembled at the moments, and were astonished at thee.

This the exulting city dwelling confidently, saying in her heart, I, and none besides me. How was she for a desolation, a piece of lying down for the beast! all passing by her shall hiss and wave his hand.

Thus said Jehovah of armies: Yet shall old men and old women sit in the broad places of Jerusalem, and a man his support in his hand from the multitude of days.

As much as she glorified herself, and led an insolent life, give her so much torture and grief: for in her heart she says, I sit a queen, and am no widow, and I should see no grief.