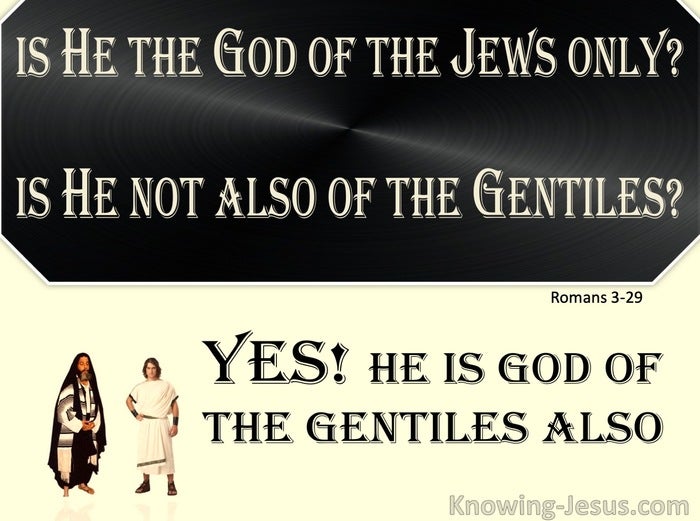 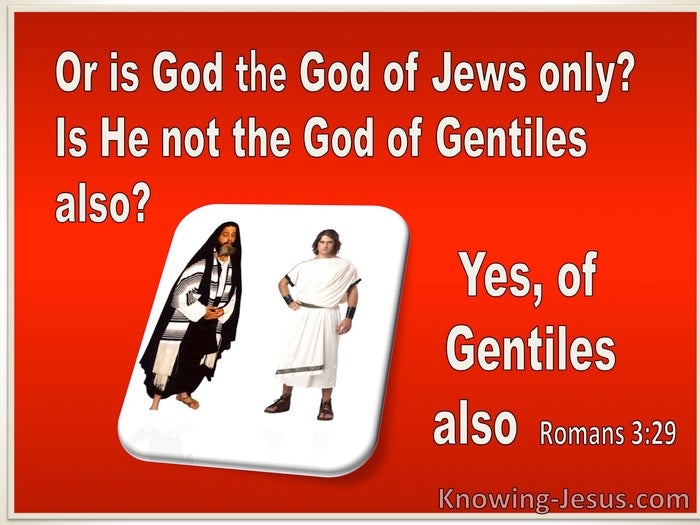 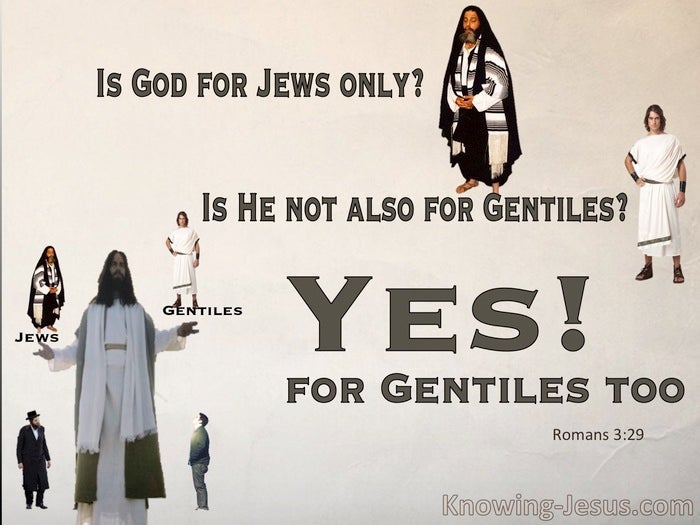 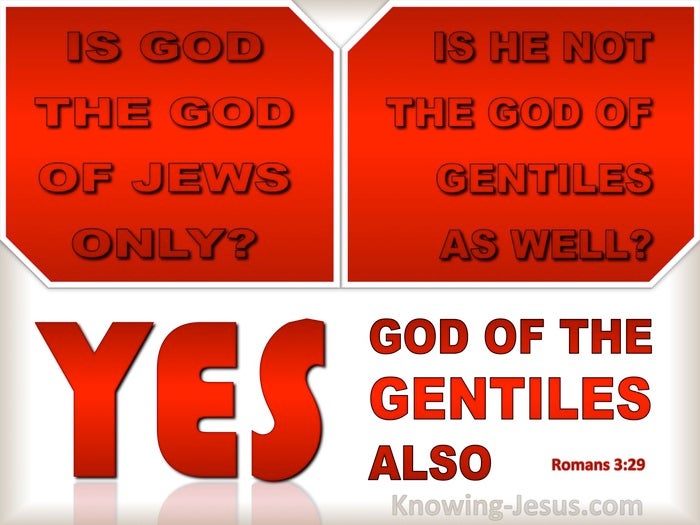 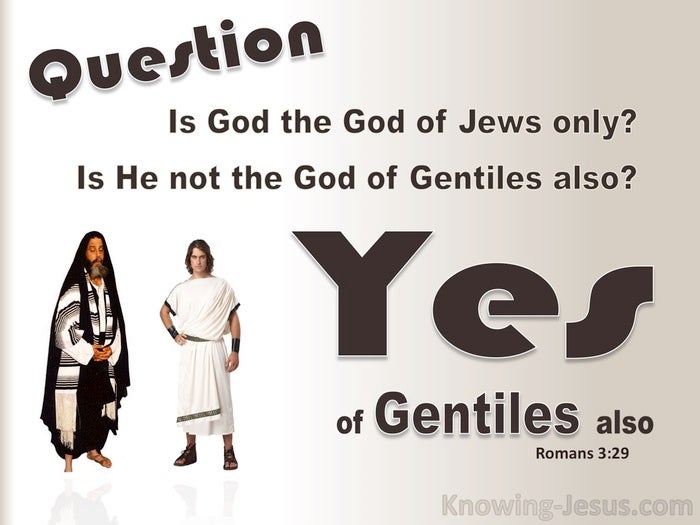 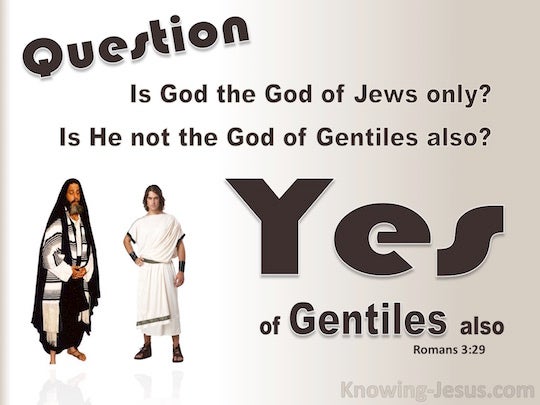 Or is God for Jews only?

Or is God of Jews only and not also of Gentiles? Yes, of Gentiles also,

Is God the God of the Jews only, and not also of the Gentiles? Surely of the Gentiles also: Seeing it is one God who will justify the circumcision by faith,

Or is God only the God of Jews? Is he not the God of the Gentiles as well? Surely he is.

Or is God [the God] of Jews alone? Is he not also the God of gentiles? Yea, of gentiles also.

Or can it be that God is the God only of the Jews? Is not he also the God of the Gentiles?

or is He the God of the Jews only, and not also of the Gentiles?

The God of Jews only is He, and not also of nations?

Faith/faithfulness » What is achieved through and by faith

Heavenly » Father » God spoken of as the father of all men

Justification » What you are justified by

Law » Who establishes the law

Universal » Blessing, possible » God spoken of as the father of all men

Blessings For Jew And Gentile

Romans, The Epistle to the

Romans, Epistle to The

Word Count of 37 Translations in Romans 3:29 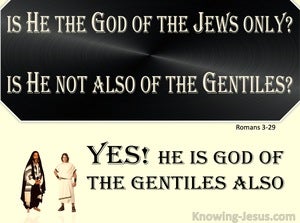 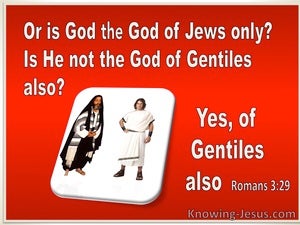 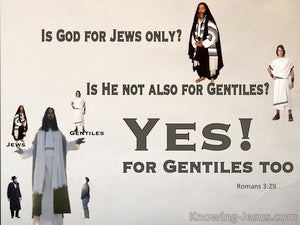 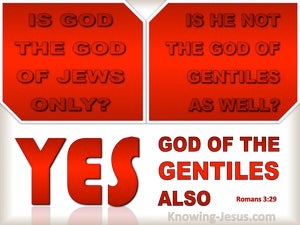 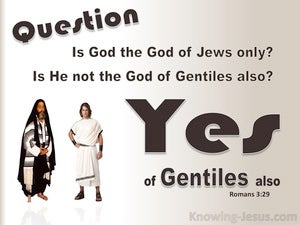 Other Readings
Righteousness Through Faith Revealed

Abraham said to God, "O that Ishmael might live before you!"

All who see me taunt me; they mock me and shake their heads.

Then those living on earth will know what you are like; all nations will know how you deliver your people.

May his fame endure! May his dynasty last as long as the sun remains in the sky! May they use his name when they formulate their blessings! May all nations consider him to be favored by God!

For your husband is the one who made you -- the Lord who commands armies is his name. He is your protector, the Holy One of Israel. He is called "God of the entire earth."

Then I said, "Lord, you give me strength and protect me. You are the one I can run to for safety when I am in trouble. Nations from all over the earth will come to you and say, 'Our ancestors had nothing but false gods -- worthless idols that could not help them at all.

"But I will make a new covenant with the whole nation of Israel after I plant them back in the land," says the Lord. "I will put my law within them and write it on their hearts and minds. I will be their God and they will be my people.

"Many nations will join themselves to the Lord on the day of salvation, and they will also be my people. Indeed, I will settle in the midst of you all." Then you will know that the Lord who rules over all has sent me to you.

The Lord who rules over all says, 'It will someday come to pass that people -- residents of many cities -- will come.

Therefore go and make disciples of all nations, baptizing them in the name of the Father and the Son and the Holy Spirit,

He said to them, "Go into all the world and preach the gospel to every creature.

and said to them, "Thus it stands written that the Christ would suffer and would rise from the dead on the third day,

But the Lord said to him, "Go, because this man is my chosen instrument to carry my name before Gentiles and kings and the people of Israel.

Then he said to me, 'Go, because I will send you far away to the Gentiles.'"

I will rescue you from your own people and from the Gentiles, to whom I am sending you

For I am not ashamed of the gospel, for it is God's power for salvation to everyone who believes, to the Jew first and also to the Greek.

even us, whom he has called, not only from the Jews but also from the Gentiles?

For there is no distinction between the Jew and the Greek, for the same Lord is Lord of all, who richly blesses all who call on him.

and thus the Gentiles glorify God for his mercy. As it is written, "Because of this I will confess you among the Gentiles, and I will sing praises to your name."

to be a minister of Christ Jesus to the Gentiles. I serve the gospel of God like a priest, so that the Gentiles may become an acceptable offering, sanctified by the Holy Spirit.

in order that in Christ Jesus the blessing of Abraham would come to the Gentiles, so that we could receive the promise of the Spirit by faith.

But now that faith has come, we are no longer under a guardian.

namely, that through the gospel the Gentiles are fellow heirs, fellow members of the body, and fellow partakers of the promise in Christ Jesus.

Here there is neither Greek nor Jew, circumcised or uncircumcised, barbarian, Scythian, slave or free, but Christ is all and in all.