11 Bible Verses about Angels Helping Us 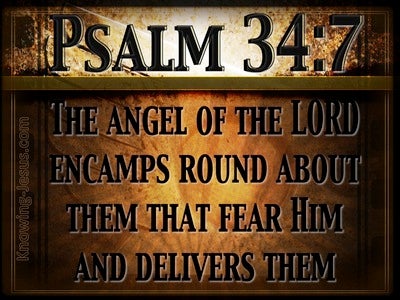 Zain The angel of the LORD encamps round about those that fear him and delivers them.

And when the morning arose, then the angels hastened Lot, saying, Arise, take thy wife and thy two daughters who are here; lest thou be consumed in the iniquity of the city. And while he lingered, the men laid hold upon his hand and upon the hand of his wife and upon the hand of his two daughters, the LORD being merciful unto him; and they brought him forth and set him outside the city. And it came to pass as they brought them forth outside, that he said, Escape; for thy soul, do not look behind thee, neither stop thou in all the plain; escape to the mountain, lest thou be consumed.

Do not forget to show hospitality; for thereby some, having entertained angels, were kept.

And he showed me a pure river of water of life, clear as crystal, proceeding out of the throne of God and of the Lamb.

Then the devil left him, and, behold, angels came and ministered unto him.

He answered and said, Behold, I see four men loose, walking in the midst of the fire, and they have no hurt; and the form of the fourth is like the Son of God.

Then the angel of the LORD went forth and smote in the camp of the Assyrians a hundred and eighty-five thousand; and when they arose early in the morning, behold, they were all dead corpses.