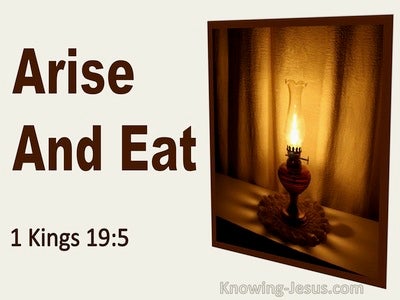 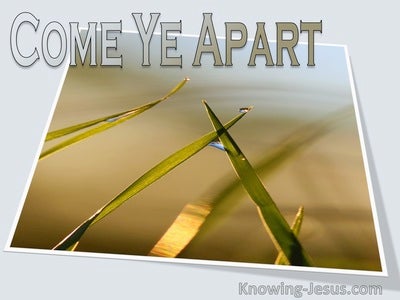 In the meanwhile his disciples entreated him, saying, Rabbi, eat.

And as he lay and slept under a juniper tree, behold, then an angel touched him and said unto him, Arise and eat.

And in the same house remain, eating and drinking such things as they give, for the labourer is worthy of his hire. Go not from house to house.

And into whatever city ye enter and they receive you, eat such things as are set before you

If any of those that do not believe bid you to a feast, and ye are disposed to go, eat whatever is set before you asking no questions for conscience sake.

As soon as you are come into the city, ye shall straightway find him before he goes up to the high place to eat, for the people will not eat until he comes because he must bless the sacrifice, and afterwards those that are invited eat. Now therefore go up, for about this time ye shall find him.

And he took butter and milk and the calf which he had dressed and set it before them; and he stood by them under the tree, and they ate.

And they sat down to eat bread; and they lifted up their eyes and looked, and, behold, a company of Ishmeelites came from Gilead with their camels bearing aromas and balm and myrrh, going to carry it down to Egypt.

And she said, Let thy handmaid find grace in thy sight. So the woman went her way, and ate, and her countenance was no longer sad.

And she brought it before Saul and before his slaves, and after they ate, they rose up and went away that night.

Then David arose from the earth and washed and anointed himself and changed his clothes and came into the house of the LORD and worshipped. Then he came to his own house; and when he asked, they set bread before him, and he ate.

Then his slaves said unto him, What is this that thou hast done? Thou didst fast and weep for the child while it was alive; but when the child was dead, thou didst rise and eat bread.

When he is about to fill his belly, God shall cast the fury of his wrath upon him and shall rain it upon him and upon his food.

And they all ate and were filled, and they took up of the fragments that remained, twelve baskets full.

And they all ate and were filled, and they took up of the broken food that was left seven baskets full.

And they all ate and were filled.

So they ate and were filled; and they took up of the broken food that was left seven baskets.

And they ate and were all filled, and there was taken up of fragments that remained to them twelve baskets.

And those that had eaten were about five thousand men besides women and children.

And those that ate were five thousand men.

And those that ate were four thousand men besides women and children.

And as they ate, he said, Verily I say unto you that one of you shall betray me.

And the multitude came together again, so that they could not so much as eat bread.

and bring here the fatted calf and kill it, and let us eat and be merry;

And he took it and ate before them.

(but other boats came from Tiberias near unto the place where they ate bread after the Lord had given thanks);

Jesus answered them and said, Verily, verily, I say unto you, Ye seek me, not because ye have seen the signs, but because ye ate of the loaves and were filled.

Jesus said unto them, Come and dine. And none of the disciples dared to ask him, Who art thou? knowing that it was the Lord.

And when he had received food, he was comforted. Then Saul was certain days with the disciples who were at Damascus.

Then they were all of good cheer, and they also took some food.

And he said unto them, Come ye yourselves apart into a desert place and rest a while; for there were many coming and going, and they had no leisure so much as to eat.

For even when we were with you, this we declared unto you, that if anyone desires not to work neither should he eat.