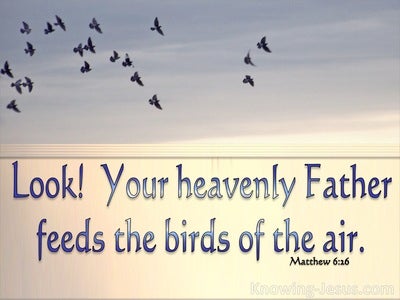 The Lord God formed out of the ground every living animal of the field and every bird of the air. He brought them to the man to see what he would name them, and whatever the man called each living creature, that was its name.

Everything looks to you in anticipation, and you provide them with food on a regular basis. You open your hand, and fill every living thing with the food they desire.

Look at the birds in the sky: They do not sow, or reap, or gather into barns, yet your heavenly Father feeds them. Aren't you more valuable than they are?

Consider the ravens: They do not sow or reap, they have no storeroom or barn, yet God feeds them. How much more valuable are you than the birds!

You must be sure to let the mother go, but you may take the young for yourself. Do this so that it may go well with you and you may have a long life.

He turns springs into streams; they flow between the mountains. They provide water for all the animals in the field; the wild donkeys quench their thirst. The birds of the sky live beside them; they chirp among the bushes.

to the one who gives food to all living things, for his loyal love endures.

He gives food to the animals, and to the young ravens when they chirp.

Should I not be even more concerned about Nineveh, this enormous city? There are more than one hundred twenty thousand people in it who do not know right from wrong, as well as many animals!"

Aren't two sparrows sold for a penny? Yet not one of them falls to the ground apart from your Father's will.

My God sent his angel and closed the lions' mouths so that they have not harmed me, because I was found to be innocent before him. Nor have I done any harm to you, O king."

Then the Lord opened the mouth of the donkey, and she said to Balaam, "What have I done to you that you have beaten me these three times?"

The Lord sent a huge fish to swallow Jonah, and Jonah was in the stomach of the fish three days and three nights.

Through faith they conquered kingdoms, administered justice, gained what was promised, shut the mouths of lions,

God blessed them and said to them, "Be fruitful and multiply! Fill the earth and subdue it! Rule over the fish of the sea and the birds of the air and every creature that moves on the ground."

Every living creature of the earth and every bird of the sky will be terrified of you. Everything that creeps on the ground and all the fish of the sea are under your authority.

you appoint them to rule over your creation; you have placed everything under their authority, including all the sheep and cattle, as well as the wild animals, the birds in the sky, the fish in the sea and everything that moves through the currents of the seas.

Wherever human beings, wild animals, and birds of the sky live -- he has given them into your power. He has given you authority over them all. You are the head of gold.

For every kind of animal, bird, reptile, and sea creature is subdued and has been subdued by humankind.

The Lord God made garments from skin for Adam and his wife, and clothed them.

Now when they approached Jerusalem and came to Bethphage, at the Mount of Olives, Jesus sent two disciples, telling them, "Go to the village ahead of you. Right away you will find a donkey tied there, and a colt with her. Untie them and bring them to me. If anyone says anything to you, you are to say, 'The Lord needs them,' and he will send them at once."

Now as they approached Jerusalem, near Bethphage and Bethany, at the Mount of Olives, Jesus sent two of his disciples and said to them, "Go to the village ahead of you. As soon as you enter it, you will find a colt tied there that has never been ridden. Untie it and bring it here. If anyone says to you, 'Why are you doing this?' say, 'The Lord needs it and will send it back here soon.'"

Now when he approached Bethphage and Bethany, at the place called the Mount of Olives, he sent two of the disciples, telling them, "Go to the village ahead of you. When you enter it, you will find a colt tied there that has never been ridden. Untie it and bring it here. If anyone asks you, 'Why are you untying it?' just say, 'The Lord needs it.'"

You must bring into the ark two of every kind of living creature from all flesh, male and female, to keep them alive with you. Of the birds after their kinds, and of the cattle after their kinds, and of every creeping thing of the ground after its kind, two of every kind will come to you so you can keep them alive. And you must take for yourself every kind of food that is eaten, and gather it together. It will be food for you and for them.read more.
And Noah did all that God commanded him -- he did indeed.

You may eat any moving thing that lives. As I gave you the green plants, I now give you everything. But you must not eat meat with its life (that is, its blood) in it.

When the Lord your God extends your borders as he said he would do and you say, "I want to eat meat just as I please," you may do so as you wish. If the place he chooses to locate his name is too far for you, you may slaughter any of your herd and flock he has given you just as I have stipulated; you may eat them in your villages just as you wish. Like you eat the gazelle or ibex, so you may eat these; the ritually impure and pure alike may eat them.read more.
However, by no means eat the blood, for the blood is life itself -- you must not eat the life with the meat! You must not eat it! You must pour it out on the ground like water. You must not eat it so that it may go well with you and your children after you; you will be doing what is right in the Lord's sight.

But Abel brought some of the firstborn of his flock -- even the fattest of them. And the Lord was pleased with Abel and his offering,

Noah built an altar to the Lord. He then took some of every kind of clean animal and clean bird and offered burnt offerings on the altar.

for the life of every living thing is in the blood. So I myself have assigned it to you on the altar to make atonement for your lives, for the blood makes atonement by means of the life.

Indeed according to the law almost everything was purified with blood, and without the shedding of blood there is no forgiveness.

Praise the Lord from the earth, you sea creatures and all you ocean depths,