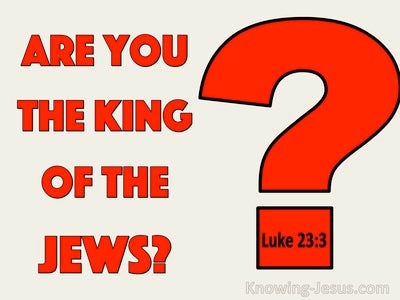 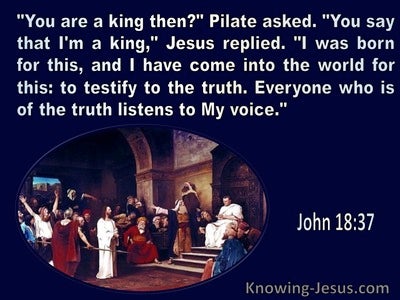 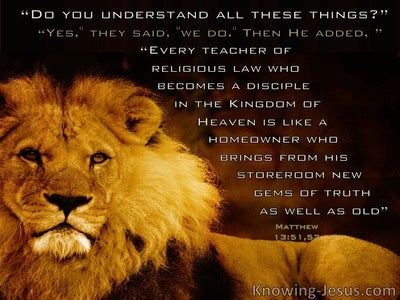 Matthew 26:25
Verse Concepts
traitorsRabbi
Who Is The One?

Jesus said to him, "You have said [it]. But I tell you, from now [on] you will see the Son of Man sitting at the right hand of the Power and coming on the clouds of heaven."

So Jesus stood before the governor, and the governor asked him, saying, "Are you the king of the Jews?" And Jesus said, "You say [so]."

Then Pilate said to him, "So then you are a king!" Jesus replied, "You say that I am a king. For this [reason] I was born, and for this reason I have come into the world: in order that I can testify to the truth. Everyone who is of the truth hears my voice."

Matthew 13:51
Verse Concepts
Do You Understand?

"Have you understood all these [things]?" They said to him, "Yes."

And [when he] came into the house, the blind men approached him, and Jesus said to them, "Do you believe that I am able to do this?" They said to him, "Yes, Lord."

He said, "Yes." And [when he] came into the house, Jesus spoke to him first, saying, "What do you think, Simon? From whom do the kings of the earth collect tolls or taxes--from their own sons, or from foreigners?"

And they said to him, "Do you hear what these [children] are saying?" So Jesus said to them, "Yes, have you never read, 'Out of the mouths of children and nursing babies you have prepared for yourself praise'?"

And Jesus said, "I am, and you will see the Son of Man sitting at the right hand of the Power and coming with the clouds of heaven."

And Peter said to her, "Tell me whether you [both] were paid this much [for] the piece of land." And she said, "Yes, this much."

Therefore, [when I] was wanting [to do] this, perhaps then was I making use of vacillation? Or was I deciding what I was deciding according to the flesh, in order that with me my "yes" may be "yes" and my "no" [may be] "no" [at the same time]?

For the Son of God, Jesus Christ, the one who was proclaimed among you by us, by me and Silvanus and Timothy, did not become "yes" and "no," but has become "yes" in him.

Now above all, my brothers, do not swear either by heaven or by earth or by any other oath, but let your yes be yes and your no, no, in order that you may not fall under judgment.

And I heard a voice from heaven saying, "Write: 'Blessed [are] the dead who die in the Lord from now on!'" "Yes," says the Spirit, "in order that they may rest from their labors, for their deeds follow after them."

Shimei said to the king, "The word is good that my lord the king has spoken to me; thus will your servant do." So Shimei lived in Jerusalem many days.

the king sent and summoned Shimei, and he said to him, "Did I not make you swear by Yahweh? I warned you, saying, 'On the day you go out and you go {anywhere whatsoever}, know for certain that {you will surely die}.' And you said to me, 'The word is good; I accept.'

And Saul was agreeing with his murder. Now there happened on that day a great persecution against the church in Jerusalem, and they were all scattered throughout the regions of Judea and Samaria, except the apostles.

And when the blood of your witness Stephen was being shed, I myself also was standing near and was approving, and was guarding the cloaks of those who were killing him.'