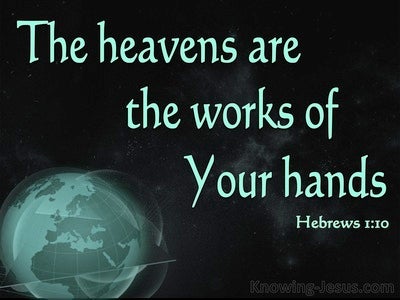 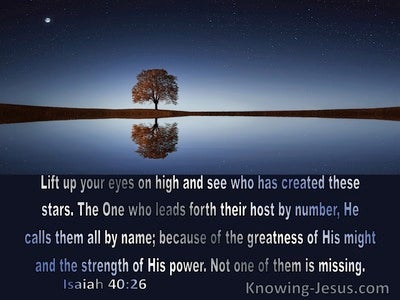 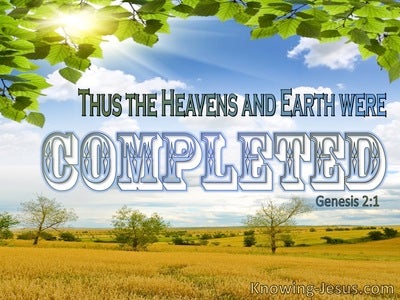 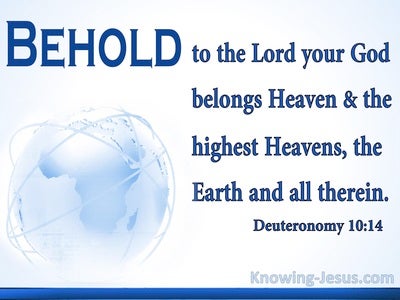 Who commands the sun not to shine,
And sets a seal upon the stars;
Who alone stretches out the heavens
And tramples down the waves of the sea;
Who makes the Bear, Orion and the Pleiades,
And the chambers of the south;

Thus the heavens and the earth were completed, and all their hosts.

Behold, to the Lord your God belong heaven and the highest heavens, the earth and all that is in it.

For all the gods of the peoples are idols,
But the Lord made the heavens.

“You alone are the Lord.
You have made the heavens,
The heaven of heavens with all their host,
The earth and all that is on it,
The seas and all that is in them.
You give life to all of them
And the heavenly host bows down before You.

“Is not God in the height of heaven?
Look also at the distant stars, how high they are!

“If even the moon has no brightness
And the stars are not pure in His sight,

“He obscures the face of the full moon
And spreads His cloud over it.

Yours is the day, Yours also is the night;
You have prepared the light and the sun.

The heavens will praise Your wonders, O Lord;
Your faithfulness also in the assembly of the holy ones.

For all the gods of the peoples are idols,
But the Lord made the heavens.

Covering Yourself with light as with a cloak,
Stretching out heaven like a tent curtain.

To Him who made the heavens with skill,
For His lovingkindness is everlasting;

The Lord by wisdom founded the earth,
By understanding He established the heavens.

“It is I who made the earth, and created man upon it.
I stretched out the heavens with My hands
And I ordained all their host.

Thus says the Lord,
Who gives the sun for light by day
And the fixed order of the moon and the stars for light by night,
Who stirs up the sea so that its waves roar;
The Lord of hosts is His name:

And,
“You, Lord, in the beginning laid the foundation of the earth,
And the heavens are the works of Your hands;

When I consider Your heavens, the work of Your fingers,
The moon and the stars, which You have ordained;
What is man that You take thought of him,
And the son of man that You care for him?

Blow the trumpet at the new moon,
At the full moon, on our feast day.

He made the moon for the seasons;
The sun knows the place of its setting.

“Can you bind the chains of the Pleiades,
Or loose the cords of Orion?
“Can you lead forth a constellation in its season,
And guide the Bear with her satellites?
“Do you know the ordinances of the heavens,
Or fix their rule over the earth?

“The sun will be turned into darkness
And the moon into blood
Before the great and awesome day of the Lord comes.

“But immediately after the tribulation of those days the sun will be darkened, and the moon will not give its light, and the stars will fall from the sky, and the powers of the heavens will be shaken.

Mark 13:25
Verse Concepts
Affecting Sun Moon And StarsSigns In The UniverseThe End Of The WorldBody
SkyFalling From HeavenThe Rapture

and the stars will be falling from heaven, and the powers that are in the heavens will be shaken.

“There will be signs in sun and moon and stars, and on the earth dismay among nations, in perplexity at the roaring of the sea and the waves,

For the stars of heaven and their constellations
Will not flash forth their light;
The sun will be dark when it rises
And the moon will not shed its light.

Then the moon will be abashed and the sun ashamed,
For the Lord of hosts will reign on Mount Zion and in Jerusalem,
And His glory will be before His elders.

And all the host of heaven will wear away,
And the sky will be rolled up like a scroll;
All their hosts will also wither away
As a leaf withers from the vine,
Or as one withers from the fig tree.

“Lift up your eyes to the sky,
Then look to the earth beneath;
For the sky will vanish like smoke,
And the earth will wear out like a garment
And its inhabitants will die in like manner;
But My salvation will be forever,
And My righteousness will not wane.

“Surely the coastlands will wait for Me;
And the ships of Tarshish will come first,
To bring your sons from afar,
Their silver and their gold with them,
For the name of the Lord your God,
And for the Holy One of Israel because He has glorified you.
“Foreigners will build up your walls,
And their kings will minister to you;
For in My wrath I struck you,
And in My favor I have had compassion on you.
“Your gates will be open continually;
They will not be closed day or night,
So that men may bring to you the wealth of the nations,
With their kings led in procession.
read more.
“For the nation and the kingdom which will not serve you will perish,
And the nations will be utterly ruined.
“The glory of Lebanon will come to you,
The juniper, the box tree and the cypress together,
To beautify the place of My sanctuary;
And I shall make the place of My feet glorious.
“The sons of those who afflicted you will come bowing to you,
And all those who despised you will bow themselves at the soles of your feet;
And they will call you the city of the Lord,
The Zion of the Holy One of Israel.
“Whereas you have been forsaken and hated
With no one passing through,
I will make you an everlasting pride,
A joy from generation to generation.
“You will also suck the milk of nations
And suck the breast of kings;
Then you will know that I, the Lord, am your Savior
And your Redeemer, the Mighty One of Jacob.
“Instead of bronze I will bring gold,
And instead of iron I will bring silver,
And instead of wood, bronze,
And instead of stones, iron.
And I will make peace your administrators
And righteousness your overseers.
“Violence will not be heard again in your land,
Nor devastation or destruction within your borders;
But you will call your walls salvation, and your gates praise.
“No longer will you have the sun for light by day,
Nor for brightness will the moon give you light;
But you will have the Lord for an everlasting light,
And your God for your glory.
“Your sun will no longer set,
Nor will your moon wane;
For you will have the Lord for an everlasting light,
And the days of your mourning will be over.

“And when I extinguish you,
I will cover the heavens and darken their stars;
I will cover the sun with a cloud
And the moon will not give its light.
“All the shining lights in the heavens
I will darken over you
And will set darkness on your land,”
Declares the Lord God.

Before them the earth quakes,
The heavens tremble,
The sun and the moon grow dark
And the stars lose their brightness.

The sun and moon grow dark
And the stars lose their brightness.

“It will come about in that day,” declares the Lord God,
“That I will make the sun go down at noon
And make the earth dark in broad daylight.

‘The sun will be turned into darkness
And the moon into blood,
Before the great and glorious day of the Lord shall come.

But the day of the Lord will come like a thief, in which the heavens will pass away with a roar and the elements will be destroyed with intense heat, and the earth and its works will be burned up.

And He took him outside and said, “Now look toward the heavens, and count the stars, if you are able to count them.” And He said to him, “So shall your descendants be.”

wild waves of the sea, casting up their own shame like foam; wandering stars, for whom the black darkness has been reserved forever.

"Can you bind the chains of the Pleiades, Or loose the cords of Orion? "Can you lead forth a constellation in its season, And guide the Bear with her satellites?