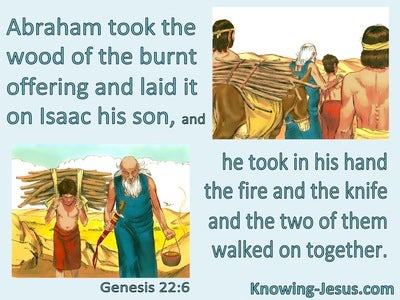 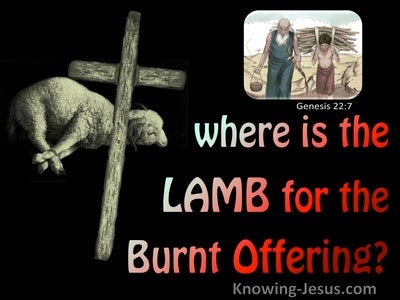 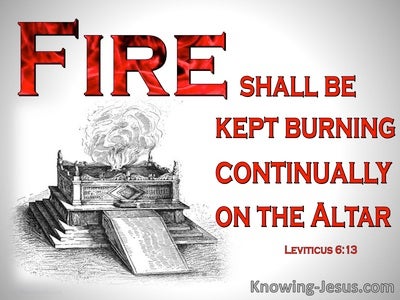 Then fire went out from the presence of the Lord and consumed the burnt offering and the fat parts on the altar, and all the people saw it, so they shouted loudly and fell down with their faces to the ground.

Then fire from the Lord fell from the sky. It consumed the offering, the wood, the stones, and the dirt, and licked up the water in the trench.

Abraham took the wood for the burnt offering and put it on his son Isaac. Then he took the fire and the knife in his hand, and the two of them walked on together.

Isaac said to his father Abraham, "My father?" "What is it, my son?" he replied. "Here is the fire and the wood," Isaac said, "but where is the lamb for the burnt offering?"

But the meat of the bull, its skin, and its dung you are to burn up outside the camp. It is the purification offering.

and the sons of Aaron, the priest, must put fire on the altar and arrange wood on the fire.

but the fire which is on the altar must be kept burning on it. It must not be extinguished. So the priest must kindle wood on it morning by morning, and he must arrange the burnt offering on it and offer the fat of the peace offering up in smoke on it.

A continual fire must be kept burning on the altar. It must not be extinguished.

Every grain offering of a priest must be a whole offering; it must not be eaten."

But any sin offering from which some of its blood is brought into the Meeting Tent to make atonement in the sanctuary must not be eaten. It must be burned up in the fire.

Leviticus 4:21
Verse Concepts
Regulations For The Sin Offering
Outside The Camp

He must bring the rest of the bull outside the camp and burn it just as he burned the first bull -- it is the sin offering of the assembly.

but the rest of the bull -- its hide, its flesh, and its dung -- he completely burned up outside the camp just as the Lord had commanded Moses.

but the flesh and the hide he completely burned up outside the camp.

Then the heifer must be burned in his sight -- its skin, its flesh, its blood, and its offal is to be burned.

and take a censer full of coals of fire from the altar before the Lord and a full double handful of finely ground fragrant incense, and bring them inside the veil-canopy.

Then Aaron's sons, Nadab and Abihu, each took his fire pan and put fire in it, set incense on it, and presented strange fire before the Lord, which he had not commanded them to do.

Numbers 3:4
Verse Concepts
Death As Punishment
Dying In The Desert

Nadab and Abihu died before the Lord when they offered strange fire before the Lord in the wilderness of Sinai, and they had no children. So Eleazar and Ithamar ministered as priests in the presence of Aaron their father.

But Nadab and Abihu died when they offered strange fire before the Lord.

You will also take the bull for the sin offering, and it will be burned in the appointed place in the temple, outside the sanctuary.

"I wish that one of you would close the temple doors, so that you no longer would light useless fires on my altar. I am not pleased with you," says the Lord who rules over all, "and I will no longer accept an offering from you.

For the bodies of those animals whose blood the high priest brings into the sanctuary as an offering for sin are burned outside the camp.

Later Moses sought diligently for the sin offering male goat, but it had actually been burnt. So he became angry at Eleazar and Ithamar, Aaron's remaining sons, saying,

Even before they burned the fat, the priest's attendant would come and say to the person who was making the sacrifice, "Hand over some meat for the priest to roast! He won't take boiled meat from you, but only raw."

These people continually and blatantly offend me as they sacrifice in their sacred orchards and burn incense on brick altars.

for your sins and your ancestors' sins," says the Lord. "Because they burned incense on the mountains and offended me on the hills, I will punish them in full measure."

If any of the meat from the consecration offerings or any of the bread is left over until morning, then you are to burn up what is left over. It must not be eaten, because it is holy.

but the remainder of the meat and the bread you must burn with fire.

but the leftovers from the meat of the sacrifice must be burned up in the fire on the third day.

It must be eaten on the day of your sacrifice and on the following day, but what is left over until the third day must be burned up. If, however, it is eaten on the third day, it is spoiled, it will not be accepted,