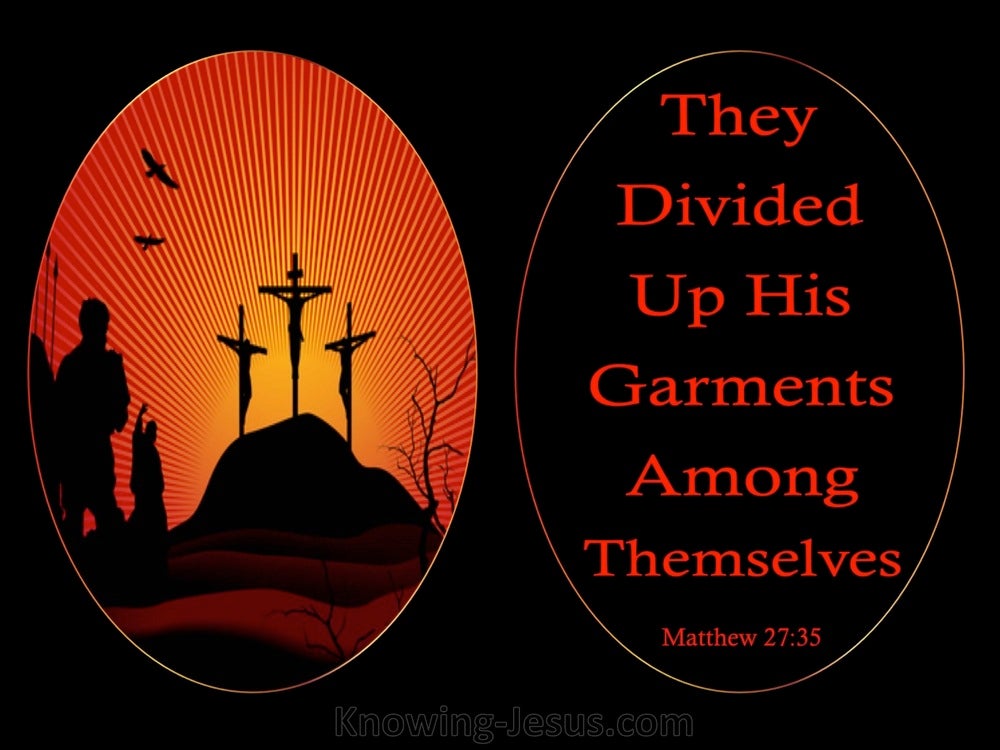 Aaron shall cast lots for the two goats, one lot for the Lord and the other lot for the scapegoat.

But the land shall be divided by lot. They shall receive their inheritance according to the names of the tribes of their fathers.

And Joshua cast lots for them in Shiloh before the Lord, and there Joshua divided the land to the sons of Israel according to their divisions.

Therefore, Saul said to the Lord, the God of Israel, “Give a perfect lot.” And Jonathan and Saul were taken, but the people escaped.

The lot is cast into the lap,
But its every decision is from the Lord.

The cast lot puts an end to strife
And decides between the mighty ones.

Jonah 1:7
Verse Concepts
Why Does This Happen?Guidance, Receiving God's
Who Is The One?Casting Lots

Each man said to his mate, “Come, let us cast lots so we may learn on whose account this calamity has struck us.” So they cast lots and the lot fell on Jonah.

And when they had crucified Him, they divided up His garments among themselves by casting lots.

And they drew lots for them, and the lot fell to Matthias; and he was added to the eleven apostles.

Numbers 33:54
Verse Concepts
Many In IsraelReal Estate
According To PeopleFew People

Therefore, Saul said to the Lord, the God of Israel, “Give a perfect lot.” And Jonathan and Saul were taken, but the people escaped. Saul said, “Cast lots between me and Jonathan my son.” And Jonathan was taken.

Then the men arose and went, and Joshua commanded those who went to describe the land, saying, “Go and walk through the land and describe it, and return to me; then I will cast lots for you here before the Lord in Shiloh.” So the men went and passed through the land, and described it by cities in seven divisions in a book; and they came to Joshua to the camp at Shiloh. And Joshua cast lots for them in Shiloh before the Lord, and there Joshua divided the land to the sons of Israel according to their divisions.

Likewise we cast lots for the supply of wood among the priests, the Levites and the people so that they might bring it to the house of our God, according to our fathers’ households, at fixed times annually, to burn on the altar of the Lord our God, as it is written in the law;

I will gather all the nations
And bring them down to the valley of Jehoshaphat.
Then I will enter into judgment with them there
On behalf of My people and My inheritance, Israel,
Whom they have scattered among the nations;
And they have divided up My land.
“They have also cast lots for My people,
Traded a boy for a harlot
And sold a girl for wine that they may drink.

Casting Lots » The land of canaan divided among tribes by

You shall divide it by

But the land shall be

Casting Lots » The garments of jesus divided by

And when they had crucified Him,

And they *crucified Him, and *

Then the soldiers, when they had crucified Jesus, took His outer garments and made four parts, a part to every soldier and also the tunic; now the tunic was seamless, woven in one piece. So they said to one another, "Let us not tear it, but cast lots for it, to decide whose it shall be"; this was to fulfill the Scripture: "THEY DIVIDED MY OUTER GARMENTS AMONG THEM, AND FOR MY CLOTHING THEY CAST LOTS."

Casting Lots » Priests and levites designated by, for sanctuary service

according to the custom of the priestly office, he was chosen by lot

Thus they were divided by lot, the one as the other; for they were officers of the sanctuary and officers of God, both from the descendants of Eleazar and the descendants of Ithamar. Shemaiah, the son of Nethanel the scribe, from the Levites, recorded them in the presence of the king, the princes, Zadok the priest, Ahimelech the son of Abiathar, and the heads of the fathers' households of the priests and of the Levites; one father's household taken for Eleazar and one taken for Ithamar. Now the first lot came out for Jehoiarib, the second for Jedaiah, read more.
the third for Harim, the fourth for Seorim, the fifth for Malchijah, the sixth for Mijamin, the seventh for Hakkoz, the eighth for Abijah, the ninth for Jeshua, the tenth for Shecaniah, the eleventh for Eliashib, the twelfth for Jakim, the thirteenth for Huppah, the fourteenth for Jeshebeab, the fifteenth for Bilgah, the sixteenth for Immer, the seventeenth for Hezir, the eighteenth for Happizzez, the nineteenth for Pethahiah, the twentieth for Jehezkel, the twenty-first for Jachin, the twenty-second for Gamul, the twenty-third for Delaiah, the twenty-fourth for Maaziah. These were their offices for their ministry when they came in to the house of the LORD according to the ordinance given to them through Aaron their father, just as the LORD God of Israel had commanded him. Now for the rest of the sons of Levi: of the sons of Amram, Shubael; of the sons of Shubael, Jehdeiah. Of Rehabiah: of the sons of Rehabiah, Isshiah the first. Of the Izharites, Shelomoth; of the sons of Shelomoth, Jahath. The sons of Hebron: Jeriah the first, Amariah the second, Jahaziel the third, Jekameam the fourth. Of the sons of Uzziel, Micah; of the sons of Micah, Shamir. The brother of Micah, Isshiah; of the sons of Isshiah, Zechariah. The sons of Merari, Mahli and Mushi; the sons of Jaaziah, Beno. The sons of Merari: by Jaaziah were Beno, Shoham, Zaccur and Ibri. By Mahli: Eleazar, who had no sons. By Kish: the sons of Kish, Jerahmeel. The sons of Mushi: Mahli, Eder and Jerimoth. These were the sons of the Levites according to their fathers' households. These also cast lots just as their relatives the sons of Aaron in the presence of David the king, Zadok, Ahimelech, and the heads of the fathers' households of the priests and of the Levites--the head of fathers' households as well as those of his younger brother.

In the first month, which is the month Nisan, in the twelfth year of King Ahasuerus,

For Haman the son of Hammedatha, the Agagite, the adversary of all the Jews, had schemed against the Jews to destroy them and

Therefore, Saul said to the LORD, the God of Israel, "Give a perfect lot." And Jonathan and Saul were taken, but the people escaped. Saul said, "Cast lots between me and Jonathan my son." And Jonathan was taken.

Casting Lots » The scapegoat chosen by

Casting Lots » Used after the captivity

Casting Lots » An apostle chosen by

Jonah 1:7
Verse Concepts
Why Does This Happen?Guidance, Receiving God's
Who Is The One?Casting Lots

Each man said to his mate, “Come, let us