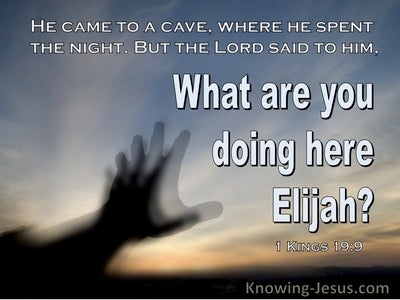 1 Kings 19:9
Verse Concepts
People In CavesWhat Do You Do?
Caves As Places Of RefugeCaves

Then he came there to a cave and lodged there; and behold, the word of the Lord came to him, and He said to him, “What are you doing here, Elijah?”

The power of Midian prevailed against Israel. Because of Midian the sons of Israel made for themselves the dens which were in the mountains and the caves and the strongholds.

He struck them ruthlessly with a great slaughter; and he went down and lived in the cleft of the rock of Etam.

When the men of Israel saw that they were in a strait (for the people were hard-pressed), then the people hid themselves in caves, in thickets, in cliffs, in cellars, and in pits.

Then Saul took three thousand chosen men from all Israel and went to seek David and his men in front of the Rocks of the Wild Goats. He came to the sheepfolds on the way, where there was a cave; and Saul went in to relieve himself. Now David and his men were sitting in the inner recesses of the cave. The men of David said to him, “Behold, this is the day of which the Lord said to you, ‘Behold; I am about to give your enemy into your hand, and you shall do to him as it seems good to you.’” Then David arose and cut off the edge of Saul’s robe secretly.read more.
It came about afterward that David’s conscience bothered him because he had cut off the edge of Saul’s robe. So he said to his men, “Far be it from me because of the Lord that I should do this thing to my lord, the Lord’s anointed, to stretch out my hand against him, since he is the Lord’s anointed.” David persuaded his men with these words and did not allow them to rise up against Saul. And Saul arose, left the cave, and went on his way. Now afterward David arose and went out of the cave and called after Saul, saying, “My lord the king!” And when Saul looked behind him, David bowed with his face to the ground and prostrated himself. David said to Saul, “Why do you listen to the words of men, saying, ‘Behold, David seeks to harm you’? Behold, this day your eyes have seen that the Lord had given you today into my hand in the cave, and some said to kill you, but my eye had pity on you; and I said, ‘I will not stretch out my hand against my lord, for he is the Lord’s anointed.’ Now, my father, see! Indeed, see the edge of your robe in my hand! For in that I cut off the edge of your robe and did not kill you, know and perceive that there is no evil or rebellion in my hands, and I have not sinned against you, though you are lying in wait for my life to take it. May the Lord judge between you and me, and may the Lord avenge me on you; but my hand shall not be against you. As the proverb of the ancients says, ‘Out of the wicked comes forth wickedness’; but my hand shall not be against you. After whom has the king of Israel come out? Whom are you pursuing? A dead dog, a single flea? The Lord therefore be judge and decide between you and me; and may He see and plead my cause and deliver me from your hand.” When David had finished speaking these words to Saul, Saul said, “Is this your voice, my son David?” Then Saul lifted up his voice and wept. He said to David, “You are more righteous than I; for you have dealt well with me, while I have dealt wickedly with you. You have declared today that you have done good to me, that the Lord delivered me into your hand and yet you did not kill me. For if a man finds his enemy, will he let him go away safely? May the Lord therefore reward you with good in return for what you have done to me this day. Now, behold, I know that you will surely be king, and that the kingdom of Israel will be established in your hand. So now swear to me by the Lord that you will not cut off my descendants after me and that you will not destroy my name from my father’s household.” David swore to Saul. And Saul went to his home, but David and his men went up to the stronghold.

2 Samuel 17:9
Verse Concepts
Killing Will HappenHiding From People
Caves As Places Of RefugePeople In Caves

Behold, he has now hidden himself in one of the caves or in another place; and it will be when he falls on them at the first attack, that whoever hears it will say, ‘There has been a slaughter among the people who follow Absalom.’

Then three of the thirty chief men went down and came to David in the harvest time to the cave of Adullam, while the troop of the Philistines was camping in the valley of Rephaim.

Now three of the thirty chief men went down to the rock to David, into the cave of Adullam, while the army of the Philistines was camping in the valley of Rephaim.

for when Jezebel destroyed the prophets of the Lord, Obadiah took a hundred prophets and hid them by fifties in a cave, and provided them with bread and water.)

“Leave the cities and dwell among the crags,
O inhabitants of Moab,
And be like a dove that nests
Beyond the mouth of the chasm.

“Flee away, turn back, dwell in the depths,
O inhabitants of Dedan,
For I will bring the disaster of Esau upon him
At the time I punish him.

Thus you shall say to them, ‘Thus says the Lord God, “As I live, surely those who are in the waste places will fall by the sword, and whoever is in the open field I will give to the beasts to be devoured, and those who are in the strongholds and in the caves will die of pestilence.

(men of whom the world was not worthy), wandering in deserts and mountains and caves and holes in the ground.

Then the kings of the earth and the great men and the commanders and the rich and the strong and every slave and free man hid themselves in the caves and among the rocks of the mountains;

So Jesus, again being deeply moved within, *came to the tomb. Now it was a cave, and a stone was lying against it.

Then his sons Isaac and Ishmael buried him in the cave of Machpelah, in the field of Ephron the son of Zohar the Hittite, facing Mamre,

Genesis 50:13
Verse Concepts
The Cave Of MachpelahempiresTombs
Caves For BuryingCaves Used As Graves

for his sons carried him to the land of Canaan and buried him in the cave of the field of Machpelah before Mamre, which Abraham had bought along with the field for a burial site from Ephron the Hittite.

So David departed from there and escaped to the cave of Adullam; and when his brothers and all his father’s household heard of it, they went down there to him.

Men will go into caves of the rocks
And into holes of the ground
Before the terror of the Lord
And the splendor of His majesty,
When He arises to make the earth tremble.

that he may give me the cave of Machpelah which he owns, which is at the end of his field; for the full price let him give it to me in your presence for a burial site.”

Now these five kings had fled and hidden themselves in the cave at Makkedah.

Caves » Were used as » Places of concealment

When the men of Israel saw that they were in a strait (for the people were hard-pressed), then

(men of whom the world was not worthy),

Caves » Afford no protection from the judgments of God

Thus you shall say to them, ‘Thus says the Lord God, “As I live, surely those who are in the waste places will

David went up from there and stayed in the strongholds of Engedi. Now when Saul returned from pursuing the Philistines, he was told, saying, "Behold, David is in the wilderness of Engedi."

Caves » Were used as » Haunts of robbers

So David departed from there and

Caves » Were used as » Resting places

1 Kings 19:9
Verse Concepts
People In CavesWhat Do You Do?
Caves As Places Of RefugeCaves

Then he came there to a cave and lodged there; and behold,

Caves » Were used as » Burial places

So Jesus, again being deeply moved within, *came to the tomb. Now it was a

After this, Abraham buried Sarah his wife in the cave of the field at Machpelah facing Mamre (that is, Hebron) in the land of Canaan.

"I have other sheep, which are not of this fold; I must bring them also, and they will hear My voice; and they will become one flock with one shepherd. "For this reason the Father loves Me, because I lay down My life so that I may take it again.

So David departed from there and

Caves » Were used as » Dwelling-places

Lot went up from Zoar, and

Caves » Found in the » Open fields

Genesis 23:20
Verse Concepts
ContractsCaves For BuryingPeople Possessing Other Things
The Cave Of MachpelahCaves Used As Graves

So the field and the cave that is in it,

(men of whom the world was not worthy),

that he may give me the cave of Machpelah which he owns, which is at the end of his field; for the full price let him give it to me in

Caves » Found in the » Rocks

Caves » Were used as » Hiding places of wild beasts

Caves As Places Of Refuge

that he may give me the cave of Machpelah which he owns, which is at the end of his field; for the full price let him give it to me in