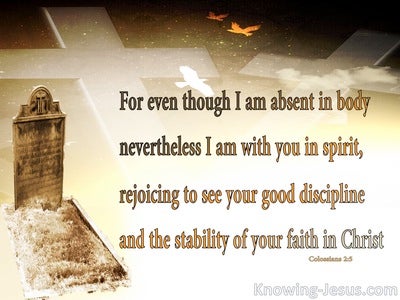 Joshua 3:4
Verse Concepts
spaceUnused
Ark Of The Covenant, FunctionNot Coming Near To God

only, a distance is between you and it, about two thousand cubits by measure; ye do not come near unto it, so that ye know the way in which ye go, for ye have not passed over in the way heretofore.'

but over-against thou seest the land, and thither thou dost not go in, unto the land which I am giving to the sons of Israel.'

And there were also women afar off beholding, among whom was also Mary the Magdalene, and Mary of James the less, and of Joses, and Salome,

And Bethany was nigh to Jerusalem, about fifteen furlongs off,

And having taken him, they led and brought him to the house of the chief priest. And Peter was following afar off,

And, having seen Jesus from afar, he ran and bowed before him,

Genesis 22:4
Verse Concepts
Seeing At A DistanceThe Third Day Of The Week
distance

On the third day -- Abraham lifteth up his eyes, and seeth the place from afar;

And the people stand afar off, and Moses hath drawn nigh unto the thick darkness where God is.

then thou hast given it in money, and hast bound up the money in thy hand, and gone unto the place on which Jehovah thy God doth fix;

and trodden was the wine-press outside of the city, and blood did come forth out of the wine-press -- unto the bridles of the horses, a thousand, six hundred furlongs.

And the tax-gatherer, having stood afar off, would not even the eyes lift up to the heaven, but was smiting on his breast, saying, God be propitious to me -- the sinner!

As the distance of east from west He hath put far from us our transgressions.

'And having risen, he went unto his own father, and he being yet far distant, his father saw him, and was moved with compassion, and having ran he fell upon his neck and kissed him;

For, as the height of the heavens is above the earth, His kindness hath been mighty over those fearing Him.

And there were there many women beholding from afar, who did follow Jesus from Galilee, ministering to him,

And there was far off from them a herd of many swine feeding,

My lovers and my friends over-against my plague stand. And my neighbours afar off have stood.

and having seen a fig-tree afar off having leaves, he came, if perhaps he shall find anything in it, and having come to it, he found nothing except leaves, for it was not a time of figs,

A king in his beauty, see do thine eyes, They see a land afar off.

And they see him from afar, even before he draweth near unto them, and they conspire against him to put him to death.

For the man is not in his house, He hath gone on a long journey.

A God near am I -- an affirmation of Jehovah, And not a God afar off?

for if even in the flesh I am absent -- yet in the spirit I am with you, joying and beholding your order, and the stedfastness of your faith in regard to Christ;

All men have looked on it, Man looketh attentively from afar.

And David passeth over to the other side, and standeth on the top of the hill afar off -- great is the place between them;

And unto Moses He said, 'Come up unto Jehovah, thou, and Aaron, Nadab, and Abihu, and seventy of the elders of Israel, and ye have bowed yourselves afar off;'

-- and fifty men of the sons of the prophets have gone on, and stand over-against afar off -- and both of them have stood by the Jordan.

'And every shipmaster, and all the company upon the ships, and sailors, and as many as work the sea, far off stood,

With trembling and rage he swalloweth the ground, And remaineth not stedfast Because of the sound of a trumpet.

and in the hades having lifted up his eyes, being in torments, he doth see Abraham afar off, and Lazarus in his bosom,

Round about is eighteen thousand, and the renown of the city is from the day Jehovah is there.'

Incline not to the right or to the left, Turn aside thy foot from evil!

And all the people are seeing the voices, and the flames, and the sound of the trumpet, and the mount smoking; and the people see, and move, and stand afar off,

And she goeth and sitteth by herself over-against, afar off, about a bow-shot, for she said, 'Let me not look on the death of the lad;' and she sitteth over-against, and lifteth up her voice, and weepeth.

The merchants of these things, who were made rich by her, far off shall stand because of the fear of her torment, weeping, and sorrowing,

Genesis 22:4
Verse Concepts
Seeing At A DistanceThe Third Day Of The Week
distance

On the third day -- Abraham lifteth up his eyes, and seeth the place from afar;

and his sister stationeth herself afar off, to know what is done to him.

and the water is consumed from the bottle, and she placeth the lad under one of the shrubs.