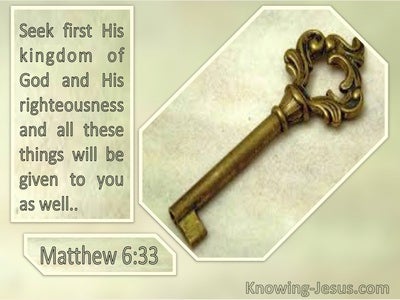 But seek first the kingdom of God and his righteousness, and all these shall be superadded unto you.

And the first angel sounded his trumpet, and there was hail and fire mingled with blood, and it was cast down upon the earth: and a third part of the trees and every green herb was burnt up.

And the first angel went forth and poured out his vial upon the earth, and there was a sore and grievous ulcer inflicted upon the men that had the mark of the beast, and upon them that worshipped his image.

And the foundations of the wall of the city were set off each with precious stones: the first foundation a jasper, the second sapphire, the third chalcedony,

And He said to another, Follow me: but he said, Lord, permit me to go first and bury my father: but Jesus said unto him, Leave the dead to bury their dead; but go thou and preach the kingdom of God.