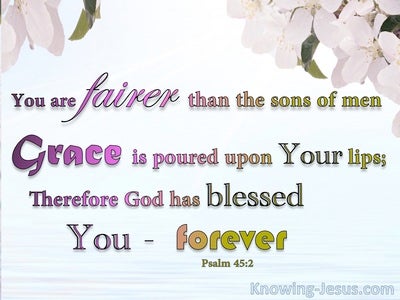 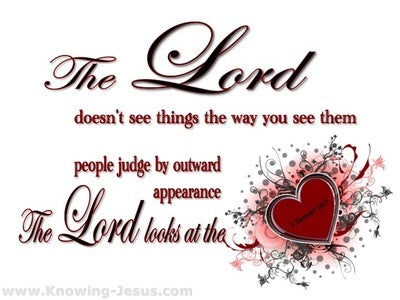 You are the most handsome of Adam's descendants; grace has anointed your lips; therefore God has blessed you forever.

They were to be young men without physical defect, handsome in appearance, skilled in all wisdom, quick to learn, prudent in how they used knowledge, and capable of serving in the king's palace. They were to learn the literature and language of the Chaldeans.

Now throughout all of Israel no one was as handsome as Absalom or so highly praised, from the sole of his foot to the crown of his head there wasn't a single thing wrong about him.

he had a son named Saul, who was a choice and handsome young man. There was no one among the Israelis as handsome as he, and he was a head taller than any of the other people.

One of the young men answered: "Look, I've seen a son of Jesse the Bethlehemite who is skilled in playing. The man is a valiant soldier, gifted in speech, and handsome. And the LORD is with him."

Everything that he owned, he entrusted into Joseph's care. He never concerned himself about anything, except for the food he ate.

So he sent and brought him. He had a dark, healthy complexion, with beautiful eyes, and he was handsome. The LORD said, "Get up and anoint him, for this is the one."

When the Philistine looked and saw David, he had contempt for him, because he was only a young man. David had a dark, healthy complexion and was handsome.

His father had never challenged him at any time during his life by asking him, "Why are you acting like this?" Adonijah was very handsome and had been born after Absalom.

Look at you! You are handsome, my beloved, truly lovely. How lush is our couch.

My beloved is dazzling, with a dark and healthy complexion, outstanding among ten thousand.

who were clothed in blue including governors and commanders. All of them were desirable young men horsemen mounted on horses. She bestowed her sexual favors on them all of them, the best of the Assyrians and with whomever she lusted for. "She defiled herself with all their idols. She never abandoned the immorality that she practiced in Egypt during her youth, where they laid down with her and fondled her virgin breasts, lavishing her with all kinds of favors. read more.
Therefore, I turned her over to the control of her lovers, that is, into the control of the Assyrians for whom she lusted. They stripped her naked, took away her sons and daughters, and executed her with a sword. She became an object of ridicule among other nations when they punished her." "Her sister Oholibah saw this, but she was more corrupt in her lust and sexual immorality than her sister had been in her own sexual immorality. She lusted after the Assyrians governors, commanders, warriors clothed in gorgeous attire, cavalry mounted on their horses all of them desirable young men. I saw that she was defiled, because the two of them both were on the same path. "She became even more sexually immoral when she saw the images of the Chaldean men who had been carved in red on their walls. Girded with waistbands around their loins, with flowing turbans on their heads, all of them looked like chariot officers, similar to the Babylonians from Chaldea, where they had been born. "She lusted after them when she saw them, so she sent messengers to summon them from Chaldea. The Babylonians came to her love nest and defiled her with their sexual immorality. As a result, she was defiled by them. Even so, she turned away from them in disgust. She displayed her immorality publicly and stripped herself naked, so I turned away in disgust from her, just as I had turned away in disgust from her sister. "Nevertheless, she became even more sexually immoral, even reminiscing about when she was young, when she kept on practicing sexual immorality in the land of Egypt. She lusted after her paramours, whose genitals are like those of donkeys, and whose emissions are like those of horses. Think about the wickedness that you practiced when you were young, when the Egyptians fondled your breasts, the breasts of your youth." "Therefore, Oholibah, this is what the Lord GOD says: "Look! I'm about to stir up your lovers against you, the ones from whom you've turned away in disgust. I'm going to bring them against you from every direction the Babylonians, all the Chaldeans, Pekod, Shoa, Koa, and all of the Assyrians with them. They're all desirable young men, governors, commanders, chariot officers, and famous men, all of them mounted on horses.

The LORD told Samuel, "Don't look at his appearance or his height, for I've rejected him. Truly, God does not see what man sees, for man looks at the outward appearance, but the LORD sees the heart."