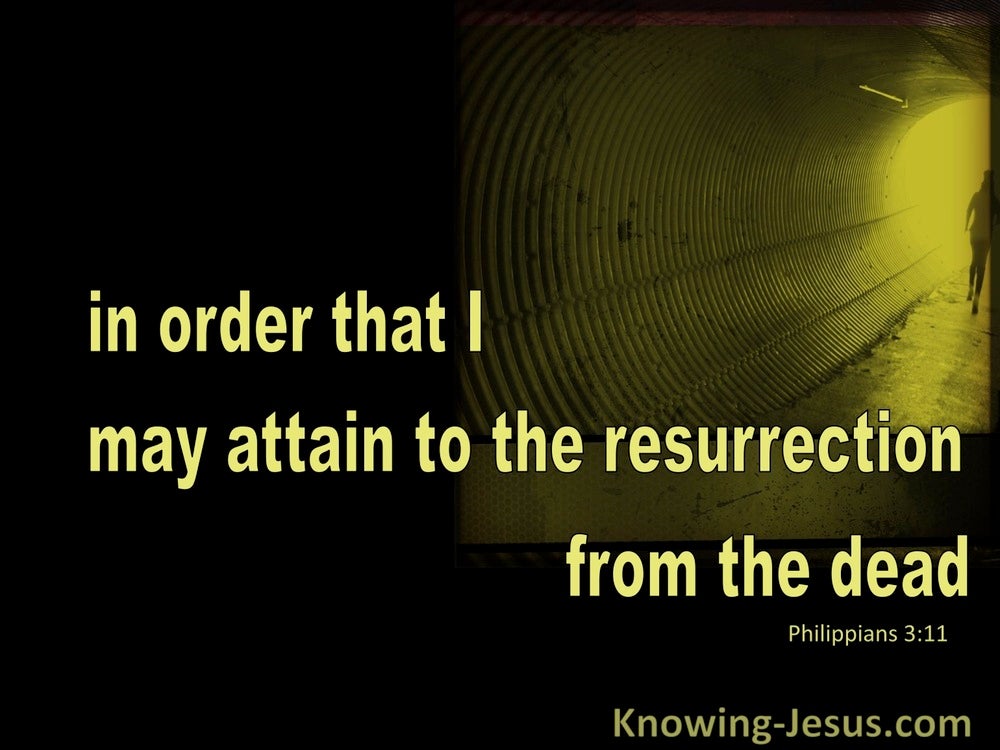 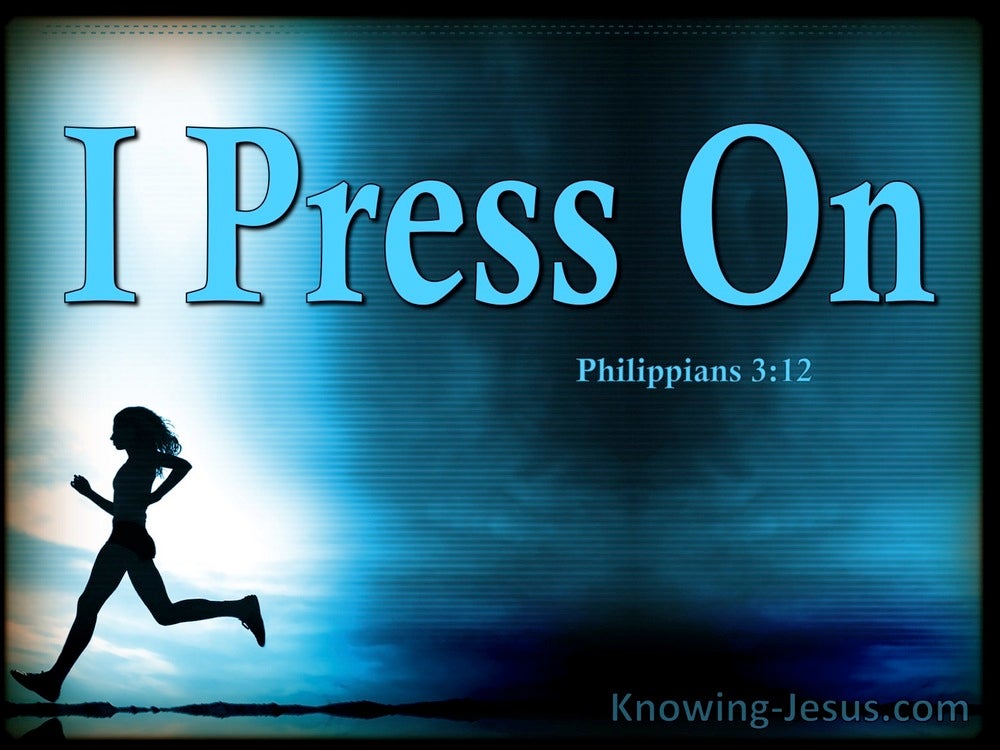 Do you not know that those who run in a race all run, but only one receives the prize? Run in such a way that you may win. Everyone who competes in the games exercises self-control in all things. They then do it to receive a perishable wreath, but we an imperishable. Therefore I run in such a way, as not without aim; I box in such a way, as not beating the air;read more.
but I discipline my body and make it my slave, so that, after I have preached to others, I myself will not be disqualified.

You have not yet resisted to the point of shedding blood in your striving against sin;

in order that I may attain to the resurrection from the dead. Not that I have already obtained it or have already become perfect, but I press on so that I may lay hold of that for which also I was laid hold of by Christ Jesus. Brethren, I do not regard myself as having laid hold of it yet; but one thing I do: forgetting what lies behind and reaching forward to what lies ahead,read more.
I press on toward the goal for the prize of the upward call of God in Christ Jesus.

Thus I was: by day the heat consumed me and the frost by night, and my sleep fled from my eyes. These twenty years I have been in your house; I served you fourteen years for your two daughters and six years for your flock, and you changed my wages ten times. If the God of my father, the God of Abraham, and the fear of Isaac, had not been for me, surely now you would have sent me away empty-handed. God has seen my affliction and the toil of my hands, so He rendered judgment last night.”

So they appointed taskmasters over them to afflict them with hard labor. And they built for Pharaoh storage cities, Pithom and Raamses. But the more they afflicted them, the more they multiplied and the more they spread out, so that they were in dread of the sons of Israel. The Egyptians compelled the sons of Israel to labor rigorously;read more.
and they made their lives bitter with hard labor in mortar and bricks and at all kinds of labor in the field, all their labors which they rigorously imposed on them.

When the inhabitants of Gibeon heard what Joshua had done to Jericho and to Ai, they also acted craftily and set out as envoys, and took worn-out sacks on their donkeys, and wineskins worn-out and torn and mended, and worn-out and patched sandals on their feet, and worn-out clothes on themselves; and all the bread of their provision was dry and had become crumbled.read more.
They went to Joshua to the camp at Gilgal and said to him and to the men of Israel, “We have come from a far country; now therefore, make a covenant with us.” The men of Israel said to the Hivites, “Perhaps you are living within our land; how then shall we make a covenant with you?” But they said to Joshua, “We are your servants.” Then Joshua said to them, “Who are you and where do you come from?” They said to him, “Your servants have come from a very far country because of the fame of the Lord your God; for we have heard the report of Him and all that He did in Egypt, and all that He did to the two kings of the Amorites who were beyond the Jordan, to Sihon king of Heshbon and to Og king of Bashan who was at Ashtaroth. So our elders and all the inhabitants of our country spoke to us, saying, ‘Take provisions in your hand for the journey, and go to meet them and say to them, “We are your servants; now then, make a covenant with us.”’ This our bread was warm when we took it for our provisions out of our houses on the day that we left to come to you; but now behold, it is dry and has become crumbled. These wineskins which we filled were new, and behold, they are torn; and these our clothes and our sandals are worn out because of the very long journey.” So the men of Israel took some of their provisions, and did not ask for the counsel of the Lord. Joshua made peace with them and made a covenant with them, to let them live; and the leaders of the congregation swore an oath to them. It came about at the end of three days after they had made a covenant with them, that they heard that they were neighbors and that they were living within their land. Then the sons of Israel set out and came to their cities on the third day. Now their cities were Gibeon and Chephirah and Beeroth and Kiriath-jearim. The sons of Israel did not strike them because the leaders of the congregation had sworn to them by the Lord the God of Israel. And the whole congregation grumbled against the leaders. But all the leaders said to the whole congregation, “We have sworn to them by the Lord, the God of Israel, and now we cannot touch them. This we will do to them, even let them live, so that wrath will not be upon us for the oath which we swore to them.” The leaders said to them, “Let them live.” So they became hewers of wood and drawers of water for the whole congregation, just as the leaders had spoken to them. Then Joshua called for them and spoke to them, saying, “Why have you deceived us, saying, ‘We are very far from you,’ when you are living within our land? Now therefore, you are cursed, and you shall never cease being slaves, both hewers of wood and drawers of water for the house of my God.” So they answered Joshua and said, “Because it was certainly told your servants that the Lord your God had commanded His servant Moses to give you all the land, and to destroy all the inhabitants of the land before you; therefore we feared greatly for our lives because of you, and have done this thing. Now behold, we are in your hands; do as it seems good and right in your sight to do to us.” Thus he did to them, and delivered them from the hands of the sons of Israel, and they did not kill them. But Joshua made them that day hewers of wood and drawers of water for the congregation and for the altar of the Lord, to this day, in the place which He would choose.

She said, “The Philistines are upon you, Samson!” And he awoke from his sleep and said, “I will go out as at other times and shake myself free.” But he did not know that the Lord had departed from him. Then the Philistines seized him and gouged out his eyes; and they brought him down to Gaza and bound him with bronze chains, and he was a grinder in the prison.

The sleep of the working man is pleasant, whether he eats little or much; but the full stomach of the rich man does not allow him to sleep.

Whatever your hand finds to do, do it with all your might; for there is no activity or planning or knowledge or wisdom in Sheol where you are going.

Furthermore I have heard the groaning of the sons of Israel, because the Egyptians are holding them in bondage, and I have remembered My covenant.

Now this is the account of the forced labor which King Solomon levied to build the house of the Lord, his own house, the Millo, the wall of Jerusalem, Hazor, Megiddo, and Gezer.

Then to Adam He said, “Because you have listened to the voice of your wife, and have eaten from the tree about which I commanded you, saying, ‘You shall not eat from it’;
Cursed is the ground because of you;
In toil you will eat of it
All the days of your life.

Then the Philistines seized him and gouged out his eyes; and they brought him down to Gaza and bound him with bronze chains, and he was a grinder in the prison.

Young men worked at the grinding mill,
And youths stumbled under loads of wood.