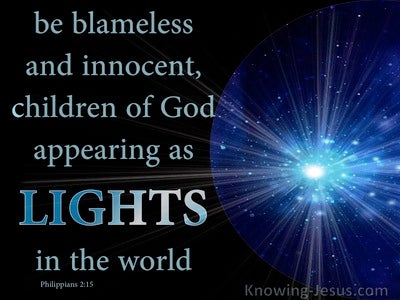 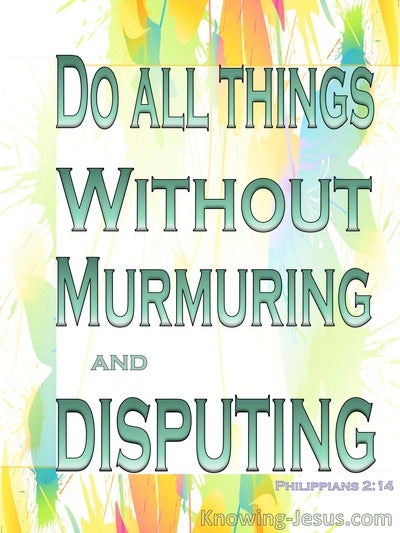 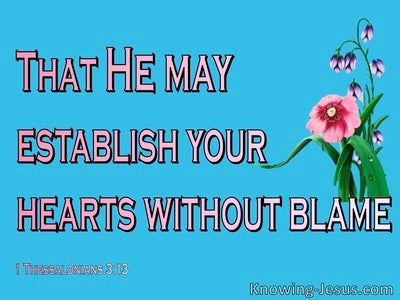 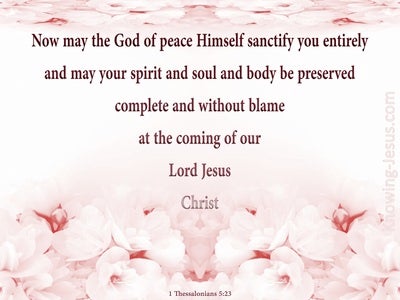 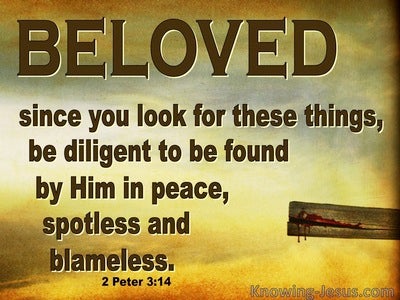 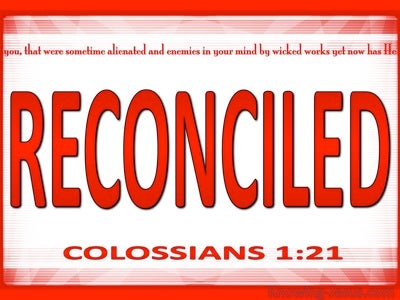 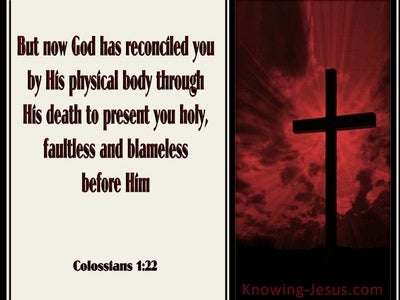 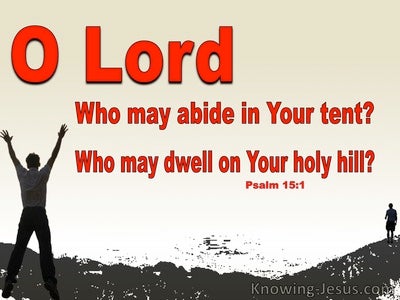 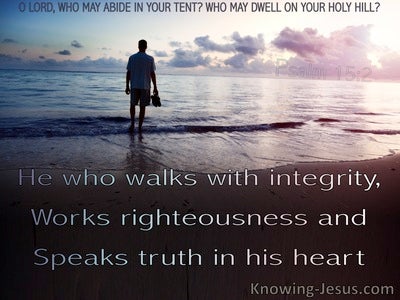 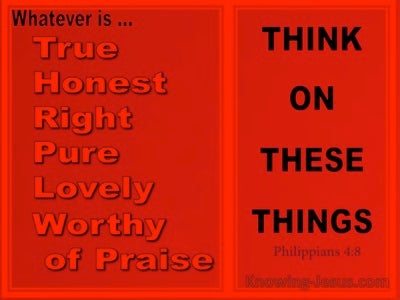 Behold, I send you forth as sheep in the midst of wolves; be ye therefore prudent as serpents and innocent as doves.

Blessed is the man unto whom the LORD does not impute iniquity and in whose spirit there is no guile.

For your obedience is come abroad unto all places. I am glad therefore on your behalf, but yet I would have you wise unto that which is good and innocent concerning evil.

Do all things without murmurings and doubts, that ye may be blameless and innocent, children of God without rebuke in the midst of a crooked and perverse generation, among whom ye shine as lights in the world,

that your hearts may be confirmed in holiness, irreprehensible before God, even our Father, for the coming of our Lord Jesus Christ with all his saints.

And the very God of peace sanctify you completely, that your spirit, soul, and body be preserved whole without reprehension for the coming of our Lord Jesus Christ.

Therefore, beloved, seeing that ye hope for such things, be diligent that ye may be found of him in peace, without spot and blameless.

For although I have nothing on my conscience, yet am I not hereby justified, but he that judges me is the Lord.

And you, that were in another time alienated and enemies in your mind by wicked works, yet now he has reconciled you in the body of his flesh through death, to present you holy and unblameable and unreproveable in his sight

thou shalt hear from heaven and do and judge thy slaves, condemning the wicked, to bring his way upon his head, and justifying the righteous, to give him according to his righteousness.

Keep thee far from a false matter; and slay thou not the innocent and righteous; for I will not justify the wicked.

This is the law of jealousies when a woman goes astray, being under the power of her husband, and is defiled; or of the husband upon whom a spirit of jealousy comes, and he is jealous over his wife; he shall then present the woman before the LORD, and the priest shall execute in her all this law. And that man shall be free from iniquity, and the woman shall bear her iniquity.

If there is a controversy between persons and they come unto judgment and they are judged, then they shall justify the righteous and condemn the wicked.

He that justifies the wicked and he that condemns the just, even they both are abomination to the LORD.

To respect the person of the wicked so that the righteous loses that which is rightfully his is not good.

These things also belong to the wise. It is not good to have respect of persons in judgment. He that saith unto the wicked, Thou art righteous; him shall the peoples curse, nations shall abhor him:

LORD, who shall abide in thy tabernacle? who shall dwell in the mountain of thy holiness? He that walks in integrity and works righteousness, and speaks the truth in his heart. He that does not backbite with his tongue nor do evil to his neighbour nor take up a reproach against his neighbour.read more.
In whose eyes the vile person is not esteemed; but he honours those that fear the LORD. He that swears to his own hurt and does not change. He that does not put out his money to usury nor take a bribe against the innocent. He that does these things shall never be moved.

And I saw and, behold, the Lamb stood upon Mount Sion and with him a hundred and forty-four thousand, having the name of his Father written in their foreheads. And I heard a voice from heaven as the voice of many waters and as the voice of a great thunder; and I heard the voice of harpers harping with their harps; and they sang as it were a new song before the throne and before the four animals and the elders; and no one could learn that song but the hundred and forty-four thousand, who were redeemed from the earth.read more.
These are those who are not defiled with women, for they are virgins. These are those who follow the Lamb wherever he goes. These are redeemed from among men, being the firstfruits unto God and to the Lamb. And in their mouth was found no guile, for they are without blemish before the throne of God.

The way of the perverse man is crooked and strange, but as for the pure, his work is right.

Thus hath the LORD said: Execute judgment and righteousness and deliver the oppressed out of the hand of the oppressor and do not deceive, neither steal from the stranger nor from the fatherless nor from the widow, neither shed innocent blood in this place.

But know ye for certain, that if ye put me to death, ye shall surely bring innocent blood upon yourselves and upon this city and upon its inhabitants; for of a truth the LORD has sent me unto you to speak all these words in your ears.

But when any man hates his neighbour and lies in wait for him and rises up against him and smites him mortally that he dies and flees into one of these cities, then the elders of his city shall send and take him from there and deliver him into the hand of the avenger of blood, and he shall die. Thine eye shall not pity him, but thou shalt put away the guilt of innocent blood from Israel that it may go well with thee.

Moreover, Manasseh shed innocent blood very much until he had filled Jerusalem from one end to another besides his sin with which he made Judah sin so that they would do that which was evil in the sight of the LORD.

and shed innocent blood, even the blood of their sons and of their daughters, whom they sacrificed unto the idols of Canaan; and the land was polluted with blood.

These six things does the LORD hate: yea, seven are an abomination unto him: A proud look, a lying tongue, and hands that shed innocent blood,

Their feet run to evil, and they make haste to shed innocent blood; their thoughts are thoughts of iniquity; wasting and destruction are their paths.

And the king said unto him, Do as he has said and fall upon him and bury him that thou may take away from me and from the house of my father the blood which Joab shed without a cause. And the LORD shall return his blood upon his own head, who fell upon two men more righteous and better than he and slew them with the sword without my father David knowing of it: Abner, the son of Ner, captain of the host of Israel, and Amasa, the son of Jether, captain of the host of Judah. Their blood shall, therefore, return upon the head of Joab, and upon the head of his seed for ever; but upon David and upon his seed and upon his house and upon his throne shall there be peace for ever from the LORD.

When one is found dead in the land which the LORD thy God gives thee to inherit, lying in the field, and it is not known who has slain him, then thy elders and thy judges shall come forth, and they shall measure unto the cities which are round about him that is dead; and it shall be that the elders of the city which is next unto the dead man shall take a heifer, which has not served, and which has not drawn in the yoke;read more.
and the elders of that city shall bring down the heifer unto a rough valley, which has neither been plowed nor sown, and shall strike off the heifer's neck there in the valley. And the priests the sons of Levi shall come near; for the LORD thy God has chosen them to minister unto him and to bless in the name of the LORD; and by their word shall every controversy and every stroke be determined. And all the elders of that closest city next to the dead man shall wash their hands over the heifer that is beheaded in the valley. And they shall answer and say, Our hands have not shed this blood, neither have our eyes seen it. Reconcile thy people Israel, whom thou hast ransomed, O LORD, and impute not the innocent blood shed in the midst of thy people Israel. And the blood shall be forgiven them. So shalt thou put away the guilt of innocent blood from among you, when thou shalt do that which is right in the sight of the LORD.

And David answered Rechab and Baanah, his brother, the sons of Rimmon, the Beerothite, and said unto them, As the LORD lives, who has ransomed my soul out of all adversity, when one told me, saying, Behold, Saul is dead, thinking to have brought good tidings, I took hold of him and slew him in Ziklag as a reward for his tidings. How much more unto wicked men who have slain a righteous person in his own house upon his bed? Shall I not, therefore, now require his blood of your hand and remove you from the earth?

Then Judas, who had betrayed him, when he saw that he was condemned, repented and returned the thirty pieces of silver to the princes of the priests and the elders, saying, I have sinned in that I have betrayed the innocent blood. And they said, What is that to us? Thou shalt see to it.

In his time Nebuchadnezzar, king of Babylon, came up, and Jehoiakim became his slave three years; then he turned and rebelled against him. And the LORD sent against him armies of the Chaldees and armies of the Syrians and armies of the Moabites and armies of the sons of Ammon and sent them against Judah to destroy it, according to the word of the LORD, which he spoke by his slaves the prophets. Surely at the commandment of the LORD this came upon Judah, to remove them out of his sight, for the sins of Manasseh, according to all that he didread more.
and also for the innocent blood that he shed, for he filled Jerusalem with innocent blood, which the LORD would not pardon.

And they cried unto the LORD and said, We beseech thee, O LORD, we beseech thee, let us not perish for the soul of this man, and do not lay upon us innocent blood: for thou, O LORD, hast done as it pleased thee.