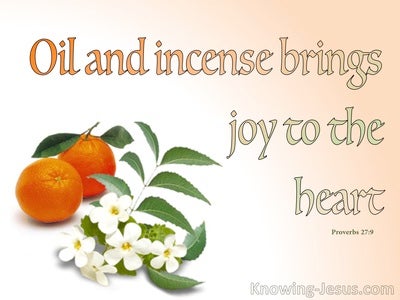 Ointment and perfume rejoice the heart, so does the sweetness of a man's friend by hearty counsel.

Now, therefore, come, let me, I pray thee, give thee counsel that thou may deliver thine own life and the life of thy son Solomon.

Behold, all ye sons of Israel; give here your advice and counsel.

Then she spoke, saying, They used to speak in old times, saying, If you have a question ask it at Abel; and so they concluded the matter.

Now when the turn of Esther, the daughter of Abihail, the uncle of Mordecai, who had taken her for his daughter, was come to go in unto the king, she required nothing but what Hegai, the king's eunuch, the keeper of the women, appointed. And Esther obtained grace in the sight of all those that looked upon her.

Therefore, O king, approve my counsel and redeem thy sins with righteousness and thine iniquities with mercies unto the poor: behold the medicine for thy sin.

O my people, remember now what Balak king of Moab consulted and what Balaam the son of Beor answered him from Shittim unto Gilgal: that ye may know the righteousness of the LORD.

And they took counsel and bought with them the potter's field to bury strangers in.

and gave them for the potter's field, as the Lord appointed me.

Behold, these caused the sons of Israel through the counsel of Balaam to commit trespass against the LORD in the matter of Peor for which there was a plague among the congregation of the LORD.

And when Hushai came to Absalom, Absalom spoke unto him, saying, Thus spoke Ahithophel; shall we follow his word or not? Speak thou.

Therefore I counsel that all Israel be generally gathered unto thee from Dan even to Beersheba, as the sand that is by the sea for multitude, and that thou go to battle in thine own person. Then we shall come upon him in some place where he shall be found, and we will light upon him as the dew falls on the ground; and of him and of all the men that are with him, there shall not be left so much as one. Moreover, if he goes into a city, then all Israel shall bring ropes to that city, and we will draw it into the river until not even one small stone is found there.read more.
Then Absalom and all the men of Israel said, The counsel of Hushai, the Archite, is better than the counsel of Ahithophel. For the LORD had given orders to defeat the good counsel of Ahithophel, to the intent that the LORD might bring evil upon Absalom.

Then King Rehoboam consulted with the old men that had stood before Solomon, his father, while he yet lived, and said, How do ye advise that I may answer this people? And they spoke unto him, saying, If thou wilt be a slave unto this people this day and wilt serve them and answer them by speaking good words unto them, then they will be thy slaves for ever. But he forsook the counsel of the old men, which they had given him, and consulted with the young men that were grown up with him and who stood before him.

But he forsook the counsel of the old men, which they had given him, and consulted with the young men that were grown up with him and who stood before him.

And he said unto them, What counsel give ye that we may answer this people who have spoken to me, saying, Make the yoke which thy father put upon us lighter?

And having taken counsel, the king made two calves of gold and said unto the people, It is too much for you to go up to Jerusalem; behold thy gods, O Israel, which brought thee up out of the land of Egypt.

Then the king of Syria warred against Israel and took counsel with his slaves, saying, In such and such a place shall be my camp.

And thou hast also appointed prophets to preach of thee at Jerusalem, saying, There is a king in Judah! And now these words shall be heard by the king. Come now, therefore, and let us take counsel together.

For my enemies speak against me, and those that lay in wait for my soul take counsel together,

The kings of the earth set themselves, and the rulers take counsel together, against the LORD and against his anointed, saying,

Then the Pharisees left and took counsel how they might entangle him in his word.

When the morning was come, all the princes of the priests and the elders of the people took counsel against Jesus to put him to death,

And when they were assembled with the elders and had taken counsel, they gave a large amount of money to the soldiers,

And as the Pharisees went forth, they took counsel with the Herodians against him, to kill him.

Behold that their good is not in their hands; the counsel of the wicked is far from me.

He had filled their houses with good things. Therefore, the counsel of the wicked is far from me.