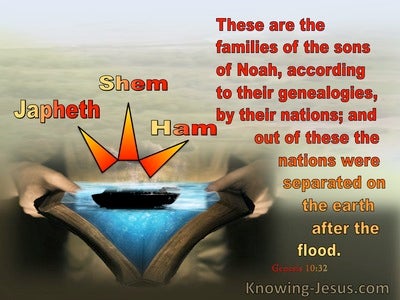 Behold, I, even I am bringing the flood of water upon the earth, to destroy all flesh in which is the breath of life, from under heaven; everything that is on the earth shall perish.

Now Noah was six hundred years old when the flood of water came upon the earth. Then Noah and his sons and his wife and his sons’ wives with him entered the ark because of the water of the flood. Of clean animals and animals that are not clean and birds and everything that creeps on the ground,read more.
there went into the ark to Noah by twos, male and female, as God had commanded Noah. It came about after the seven days, that the water of the flood came upon the earth. In the six hundredth year of Noah’s life, in the second month, on the seventeenth day of the month, on the same day all the fountains of the great deep burst open, and the floodgates of the sky were opened. The rain fell upon the earth for forty days and forty nights. On the very same day Noah and Shem and Ham and Japheth, the sons of Noah, and Noah’s wife and the three wives of his sons with them, entered the ark, they and every beast after its kind, and all the cattle after their kind, and every creeping thing that creeps on the earth after its kind, and every bird after its kind, all sorts of birds. So they went into the ark to Noah, by twos of all flesh in which was the breath of life. Those that entered, male and female of all flesh, entered as God had commanded him; and the Lord closed it behind him. Then the flood came upon the earth for forty days, and the water increased and lifted up the ark, so that it rose above the earth. The water prevailed and increased greatly upon the earth, and the ark floated on the surface of the water. The water prevailed more and more upon the earth, so that all the high mountains everywhere under the heavens were covered. The water prevailed fifteen cubits higher, and the mountains were covered. All flesh that moved on the earth perished, birds and cattle and beasts and every swarming thing that swarms upon the earth, and all mankind; of all that was on the dry land, all in whose nostrils was the breath of the spirit of life, died. Thus He blotted out every living thing that was upon the face of the land, from man to animals to creeping things and to birds of the sky, and they were blotted out from the earth; and only Noah was left, together with those that were with him in the ark. The water prevailed upon the earth one hundred and fifty days.

and did not spare the ancient world, but preserved Noah, a preacher of righteousness, with seven others, when He brought a flood upon the world of the ungodly;

but the dove found no resting place for the sole of her foot, so she returned to him into the ark, for the water was on the surface of all the earth. Then he put out his hand and took her, and brought her into the ark to himself.

through which the world at that time was destroyed, being flooded with water.

I establish My covenant with you; and all flesh shall never again be cut off by the water of the flood, neither shall there again be a flood to destroy the earth.”

and I will remember My covenant, which is between Me and you and every living creature of all flesh; and never again shall the water become a flood to destroy all flesh.

“For this is like the days of Noah to Me,
When I swore that the waters of Noah
Would not flood the earth again;
So I have sworn that I will not be angry with you
Nor will I rebuke you.

Now these are the records of the generations of Shem, Ham, and Japheth, the sons of Noah; and sons were born to them after the flood.

These are the families of the sons of Noah, according to their genealogies, by their nations; and out of these the nations were separated on the earth after the flood.

and they did not understand until the flood came and took them all away; so will the coming of the Son of Man be.

But God remembered Noah and all the beasts and all the cattle that were with him in the ark; and God caused a wind to pass over the earth, and the water subsided.