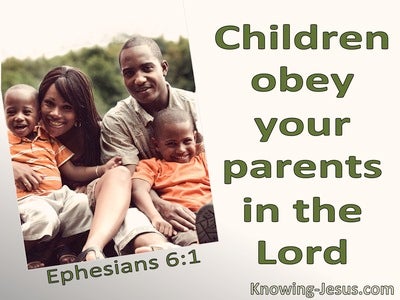 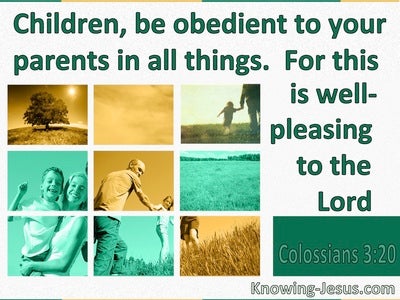 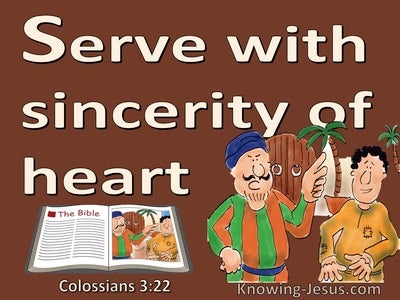 I pray thee, the commandment of a king keep, even for the sake of the oath of God.

The servants! obey the masters according to the flesh with fear and trembling, in the simplicity of your heart, as to the Christ;

The servants! obey in all things those who are masters according to the flesh, not in eye-service as men-pleasers, but in simplicity of heart, fearing God;

for I also am a man under authority, having under myself soldiers, and I say to this one, Go, and he goeth, and to another, Be coming, and he cometh, and to my servant, Do this, and he doth it.'

for I also am a man placed under authority, having under myself soldiers, and I say to this one, Go, and he goeth; and to another, Be coming, and he cometh; and to my servant, Do this, and he doth it.'

Hath he favour to that servant because he did the things directed? I think not.

And he answering said, 'I will not,' but at last, having repented, he went.

which of the two did the will of the father?' They say to him, 'The first.' Jesus saith to them, 'Verily I say to you, that the tax-gatherers and the harlots do go before you into the reign of God,

and he answering said to the father, Lo, so many years I do serve thee, and never thy command did I transgress, and to me thou didst never give a kid, that with my friends I might make merry;

and Sarai saith unto Abram, 'Lo, I pray thee, Jehovah hath restrained me from bearing, go in, I pray thee, unto my handmaid; perhaps I am built up from her;' and Abram hearkeneth to the voice of Sarai.

And his sons do to him so as he commanded them,

And Moses hearkeneth to the voice of his father-in-law, and doth all that he said,

and saith unto them, 'Ye -- ye have kept the whole of that which Moses, servant of Jehovah, commanded you, and ye hearken to my voice, to all that I have commanded you;

Joshua 1:17
Verse Concepts
God Be With You

according to all that we hearkened unto Moses in, so we hearken unto thee; surely Jehovah thy God is with thee as He hath been with Moses.

And they answer Joshua, saying, 'All that thou hast commanded us we do; and unto every place whither thou dost send us, we go;

And she goeth down to the threshing-floor, and doth according to all that her mother-in-law commanded her

Esther is not declaring her kindred and her people, as Mordecai hath laid a charge upon her, and the saying of Mordecai Esther is doing as when she was truly with him.

And Mordecai passeth on, and doth according to all that Esther hath charged upon him.

And the Jews have received that which they had begun to do, and that which Mordecai hath written unto them,

Performed have been the words of Jonadab son of Rechab, when he commanded his sons not to drink wine, and they have not drunk unto this day, for they have obeyed the command of their father; and I -- I have spoken unto you, rising early and speaking, and ye have not hearkened unto Me.

'Because the sons of Jonadab son of Rechab have performed the command of their father, that he commanded them, and this people have not hearkened unto Me,

And to the house of the Rechabites said Jeremiah: 'Thus said Jehovah of Hosts, God of Israel, Because that ye have hearkened unto the command of Jonadab your father, and ye observe all his commands, and do according to all that he commanded you;

Jeremiah 35:8
Verse Concepts
Drinking No Wine
Love, And The World

'And we hearken to the voice of Jonadab son of Rechab, our father, to all that he commanded us, not to drink wine all our days, we, our wives, our sons, and our daughters;

and we dwell in tents, and we hearken, and we do according to all that Jonadab our father commanded us;

Sons of a stranger feign obedience to me, At the hearing of the ear they hearken to me.

At the hearing of the ear they hearken to me, Sons of a stranger feign obedience to me,

all, then, as much as they may say to you to observe, observe and do, but according to their works do not, for they say, and do not;

and he went down with them, and came to Nazareth, and he was subject to them, and his mother was keeping all these sayings in her heart,

and his tender affection is more abundantly toward you, remembering the obedience of you all, how with fear and trembling ye did receive him;

And they, having received the money, did as they were taught, and this account was spread abroad among Jews till this day.

and the Lord said, 'If ye had faith as a grain of mustard, ye would have said to this sycamine, Be uprooted, and be planted in the sea, and it would have obeyed you.

as Sarah was obedient to Abraham, calling him 'sir,' of whom ye did become daughters, doing good, and not fearing any terror.