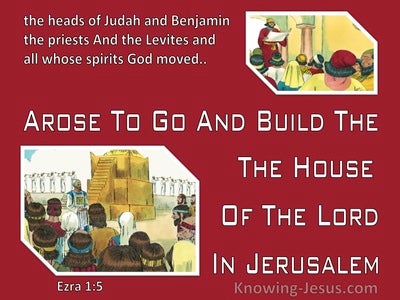 He eliminated the pagan priests whom the kings of Judah had appointed to offer sacrifices on the high places in the cities of Judah and in the area right around Jerusalem. (They offered sacrifices to Baal, the sun god, the moon god, the constellations, and all the stars in the sky.)

The inhabitants of Samaria will lament over the calf idol of Beth Aven. Its people will mourn over it; its idolatrous priests will wail over it, because its splendor will be taken from them into exile.

"I will attack Judah and all who live in Jerusalem. I will remove from this place every trace of Baal worship, as well as the very memory of the pagan priests.

Then the leaders of Judah and Benjamin, along with the priests and the Levites -- all those whose mind God had stirred -- got ready to go up in order to build the temple of the Lord in Jerusalem.

Hosea 4:9
Verse Concepts
Punishment of the The WickedGod Will Requite
Rewards Of RitualLike People In Character

I will deal with the people and priests together: I will punish them both for their ways, and I will repay them for their deeds.

Her leaders take bribes when they decide legal cases, her priests proclaim rulings for profit, and her prophets read omens for pay. Yet they claim to trust the Lord and say, "The Lord is among us. Disaster will not overtake us!"

But Aaron and his descendants offered sacrifices on the altar for burnt offerings and on the altar for incense as they had been assigned to do in the most holy sanctuary. They made atonement for Israel, just as God's servant Moses had ordered.

"And you, bring near to you your brother Aaron and his sons with him from among the Israelites, so that they may minister as my priests -- Aaron, Nadab and Abihu, Eleazar and Ithamar, Aaron's sons.

Exodus 29:44
Verse Concepts
SanctificationAtonement, in OT
Servanthood, And Worship Of GodSetting Up The Bronze Altar

"You are to anoint Aaron and his sons and sanctify them, so that they may minister as my priests.

It was a memorial for the Israelites, that no outsider who is not a descendant of Aaron should approach to burn incense before the Lord, that he might not become like Korah and his company -- just as the Lord had spoken by the authority of Moses.

The Levitical priests -- indeed, the entire tribe of Levi -- will have no allotment or inheritance with Israel; they may eat the burnt offerings of the Lord and of his inheritance.

Jeremiah 33:21
Verse Concepts
The Dynasty Of DavidSaul And David
Later Covenants With God

Micah said, "Now I know God will make me rich, because I have this Levite as my priest."

his son Eliab, his son Jeroham, and his son Elkanah.

The Danites worshiped the carved image. Jonathan, descendant of Gershom, son of Moses, and his descendants served as priests for the tribe of Dan until the time of the exile.

"'But the Levitical priests, the descendants of Zadok who kept the charge of my sanctuary when the people of Israel went astray from me, will approach me to minister to me; they will stand before me to offer me the fat and the blood, declares the sovereign Lord. They will enter my sanctuary, and approach my table to minister to me; they will keep my charge.

Zadok son of Ahitub and Ahimelech son of Abiathar were priests; Seraiah was scribe;

He built temples on the high places and appointed as priests people who were not Levites.

After this happened, Jeroboam still did not change his evil ways; he continued to appoint common people as priests at the high places. Anyone who wanted the job he consecrated as a priest.

The priests and Levites who lived throughout Israel supported him, no matter where they resided. The Levites even left their pasturelands and their property behind and came to Judah and Jerusalem, for Jeroboam and his sons prohibited them from serving as the Lord's priests.

But you banished the Lord's priests, Aaron's descendants, and the Levites, and appointed your own priests just as the surrounding nations do! Anyone who comes to consecrate himself with a young bull or seven rams becomes a priest of these fake gods!

"You are to present Aaron and his sons at the entrance of the tent of meeting. You are to wash them with water

and Aaron and his sons must wash their hands and their feet from it.

"You are to bring Aaron and his sons to the entrance of the tent of meeting and wash them with water.

"You are to anoint Aaron and his sons and sanctify them, so that they may minister as my priests. And you are to tell the Israelites: 'This is to be my sacred anointing oil throughout your generations. It must not be applied to people's bodies, and you must not make any like it with the same recipe. It is holy, and it must be holy to you.

These are the names of the sons of Aaron, the anointed priests, whom he consecrated to minister as priests.

"Now this is what you are to do for them to consecrate them so that they may minister as my priests. Take a young bull and two rams without blemish;

and take some of the blood of the bull and put it on the horns of the altar with your finger; all the rest of the blood you are to pour out at the base of the altar. You are to take all the fat that covers the entrails, and the lobe that is above the liver, and the two kidneys and the fat that is on them, and burn them on the altar. But the meat of the bull, its skin, and its dung you are to burn up outside the camp. It is the purification offering.

He then poured some of the anointing oil on the head of Aaron and anointed him to consecrate him.

"Thus you are to do for Aaron and for his sons, according to all that I have commanded you; you are to consecrate them for seven days.

Then he presented the second ram, the ram of ordination, and Aaron and his sons laid their hands on the head of the ram

Now this man Micah owned a shrine. He made an ephod and some personal idols and hired one of his sons to serve as a priest.

"For Aaron's sons you are to make tunics, sashes, and headbands for glory and for beauty.

Make for them linen undergarments to cover their naked bodies; they must cover from the waist to the thighs.

Moses also brought forward Aaron's sons, clothed them with tunics, wrapped sashes around them, and wrapped headbands on them just as the Lord had commanded Moses.