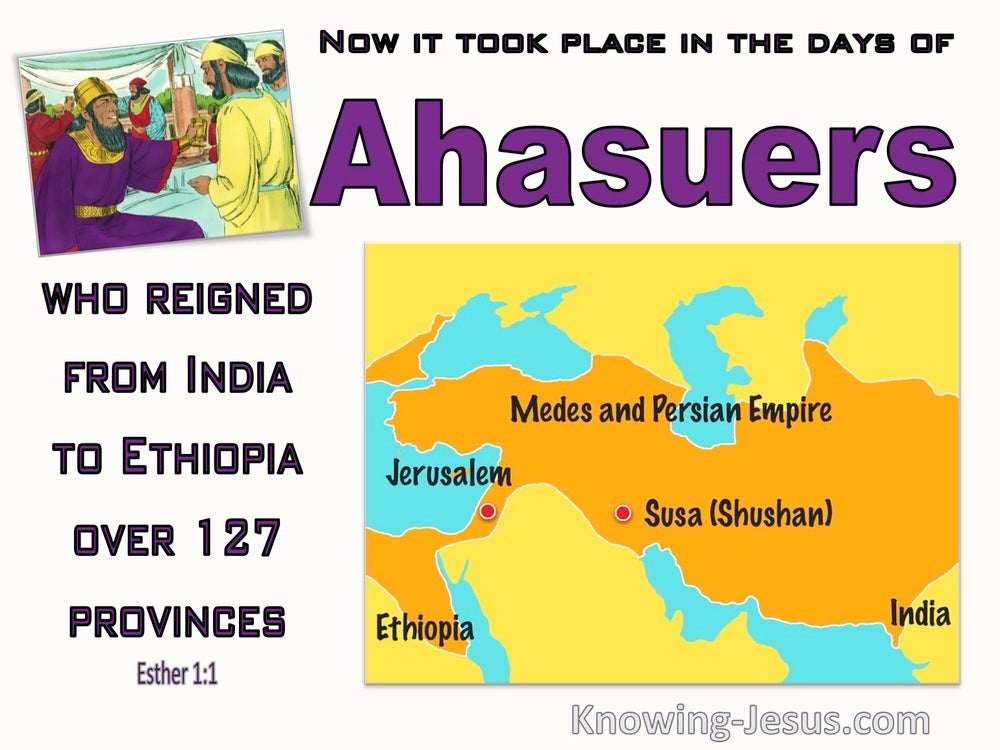 So, being sent out by the Holy Spirit, they went down to Seleucia and from there they sailed to Cyprus.

Esther 1:1
Verse Concepts
Times Of PeopleAfrica
A Hundred And Some

Now it took place in the days of Ahasuerus, the Ahasuerus who reigned from India to Ethiopia over 127 provinces,

When he had read it, he asked from what province he was, and when he learned that he was from Cilicia,

Indeed, Mordecai was great in the king’s house, and his fame spread throughout all the provinces; for the man Mordecai became greater and greater.

But while Gallio was proconsul of Achaia, the Jews with one accord rose up against Paul and brought him before the judgment seat,

This took place for two years, so that all who lived in Asia heard the word of the Lord, both Jews and Greeks.

Acts 16:7
Verse Concepts
Led By The Spirit
The Spirit Of Christ

and after they came to Mysia, they were trying to go into Bithynia, and the Spirit of Jesus did not permit them;

Parthians and Medes and Elamites, and residents of Mesopotamia, Judea and Cappadocia, Pontus and Asia,

Now when they had gone, behold, an angel of the Lord *appeared to Joseph in a dream and said, “Get up! Take the Child and His mother and flee to Egypt, and remain there until I tell you; for Herod is going to search for the Child to destroy Him.”

Acts 16:6
Verse Concepts
MissionariesLed By The Spiritevangelists, ministry of
Inspiration Of The Holy Spirit, Purpose OfThe Holy Spirit In The Church

They passed through the Phrygian and Galatian region, having been forbidden by the Holy Spirit to speak the word in Asia;

and from there to Philippi, which is a leading city of the district of Macedonia, a Roman colony; and we were staying in this city for some days.

Now Paul and his companions put out to sea from Paphos and came to Perga in Pamphylia; but John left them and returned to Jerusalem.

When we had sailed through the sea along the coast of Cilicia and Pamphylia, we landed at Myra in Lycia.

The news about Him spread throughout all Syria; and they brought to Him all who were ill, those suffering with various diseases and pains, demoniacs, epileptics, paralytics; and He healed them.

Revelation 1:4
Verse Concepts
Grace Be To YouThe Fact Of His ComingGoing To ChurchNames And Titles For The Holy SpiritThe Existence Of God
Seven PeopleSevenSeven SpiritsSpiritsGod In Three Persons

John to the seven churches that are in Asia: Grace to you and peace, from Him who is and who was and who is to come, and from the seven Spirits who are before His throne,

You are aware of the fact that all who are in Asia turned away from me, among whom are Phygelus and Hermogenes.

For we do not want you to be unaware, brethren, of our affliction which came to us in Asia, that we were burdened excessively, beyond our strength, so that we despaired even of life;

In each and every province where the command and decree of the king came, there was great mourning among the Jews, with fasting, weeping and wailing; and many lay on sackcloth and ashes.

Ezra 2:1
Verse Concepts
Those who returned from exileReturn From Babylon
JudaismExile Of Judah To Babylon

Now these are the people of the province who came up out of the captivity of the exiles whom Nebuchadnezzar the king of Babylon had carried away to Babylon, and returned to Jerusalem and Judah, each to his city.

For even when we came into Macedonia our flesh had no rest, but we were afflicted on every side: conflicts without, fears within. But God, who comforts the depressed, comforted us by the coming of Titus; and not only by his coming, but also by the comfort with which he was comforted in you, as he reported to us your longing, your mourning, your zeal for me; so that I rejoiced even more.read more.
For though I caused you sorrow by my letter, I do not regret it; though I did regret it—for I see that that letter caused you sorrow, though only for a while— I now rejoice, not that you were made sorrowful, but that you were made sorrowful to the point of repentance; for you were made sorrowful according to the will of God, so that you might not suffer loss in anything through us. For the sorrow that is according to the will of God produces a repentance without regret, leading to salvation, but the sorrow of the world produces death. For behold what earnestness this very thing, this godly sorrow, has produced in you: what vindication of yourselves, what indignation, what fear, what longing, what zeal, what avenging of wrong! In everything you demonstrated yourselves to be innocent in the matter. So although I wrote to you, it was not for the sake of the offender nor for the sake of the one offended, but that your earnestness on our behalf might be made known to you in the sight of God. For this reason we have been comforted.And besides our comfort, we rejoiced even much more for the joy of Titus, because his spirit has been refreshed by you all. For if in anything I have boasted to him about you, I was not put to shame; but as we spoke all things to you in truth, so also our boasting before Titus proved to be the truth. His affection abounds all the more toward you, as he remembers the obedience of you all, how you received him with fear and trembling. I rejoice that in everything I have confidence in you.

The churches of Asia greet you. Aquila and Prisca greet you heartily in the Lord, with the church that is in their house. All the brethren greet you. Greet one another with a holy kiss. The greeting is in my own hand—Paul.read more.
If anyone does not love the Lord, he is to be accursed. Maranatha. The grace of the Lord Jesus be with you. My love be with you all in Christ Jesus. Amen.