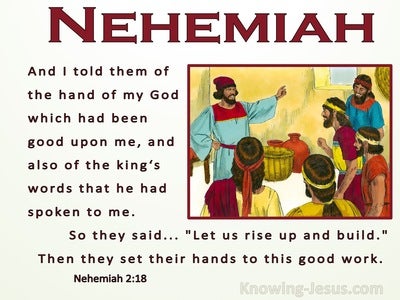 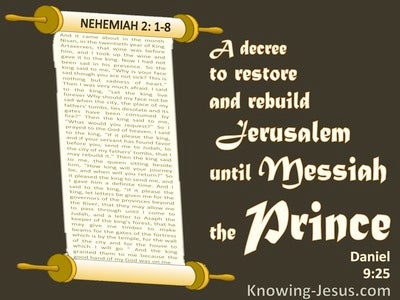 So David dwelt in the fortress and called it the city of David. And David built round about from Millo and inward.

Be it known unto the king that the Jews who came up from thee to us are come unto Jerusalem, building the rebellious and the bad city, and have founded the walls thereof and joined the foundations.

Then said I unto them, Ye see the distress that we are in, how Jerusalem lies waste and its gates are burned with fire; come, and let us build up the wall of Jerusalem, that we be no longer in reproach.

Then I told them how the hand of my God was good upon me and likewise the king's words that he had spoken unto me. And they said, Let us rise up and build. So they comforted their hands for good.

Do good in thy good pleasure unto Zion; build thou the walls of Jerusalem.

The LORD, he who builds up Jerusalem; shall gather together the outcasts of Israel.

because the LORD shall have built up Zion, and he shall be seen in his glory.

that calls Cyrus, my shepherd, and all that I desire, he shall fulfil, by saying to Jerusalem, Thou shalt be built and to the temple, Thy foundation shall be laid.

Thus hath the LORD said; Behold, I will turn the captivity of Jacob's tents and have mercy on his dwelling places and the city shall be built upon her own hill, and the temple according to her judgment shall stand.

Again I will build thee, and thou shalt be built, O virgin of Israel: thou shalt again be adorned with thy tambourines and shalt go forth in the chorus of dancers.

Behold, the days come, said the LORD, and the city shall be built unto the LORD from the tower of Hananeel unto the gate of the corner.

that awakes the word of his slave and fulfills the counsel of his messengers, that says unto Jerusalem, Thou shalt be inhabited and to the cities of Judah, Ye shall be rebuilt, and I will raise up thy ruins

and I will multiply men upon you, all the house of Israel, even all of it: and the cities shall be inhabited, and the ruins shall be built.

Nehemiah 2:5
Verse Concepts
The Will Of MenFavorrebuilding
Love, And The WorldTravel

And I said unto the king, If it pleases the king, and if thy slave has found favour in thy sight, that thou would send me unto Judah, unto the city of my fathers' sepulchres, that I may rebuild it.

Know therefore and understand that from the going forth of the word to cause the people to return and to build Jerusalem unto the Anointed Prince, there shall be seven weeks, and sixty-two weeks, while the street shall be built again and the wall, even in troublous times.

And this is the account of the levy which King Solomon raised to build the house of the LORD and his own house and Millo and the wall of Jerusalem and Hazor and Megiddo and Gezer.

But Pharaoh's daughter came up out of the city of David unto her house which Solomon had built for her; then he built Millo.

And this was why he lifted up his hand against the king: Solomon in building Millo, closed the breach of the city of David, his father.

In the day that thy walls shall be built unto thee, in that day shall the decree of thy slavery be far removed.

that build up Zion with blood and Jerusalem with iniquity;